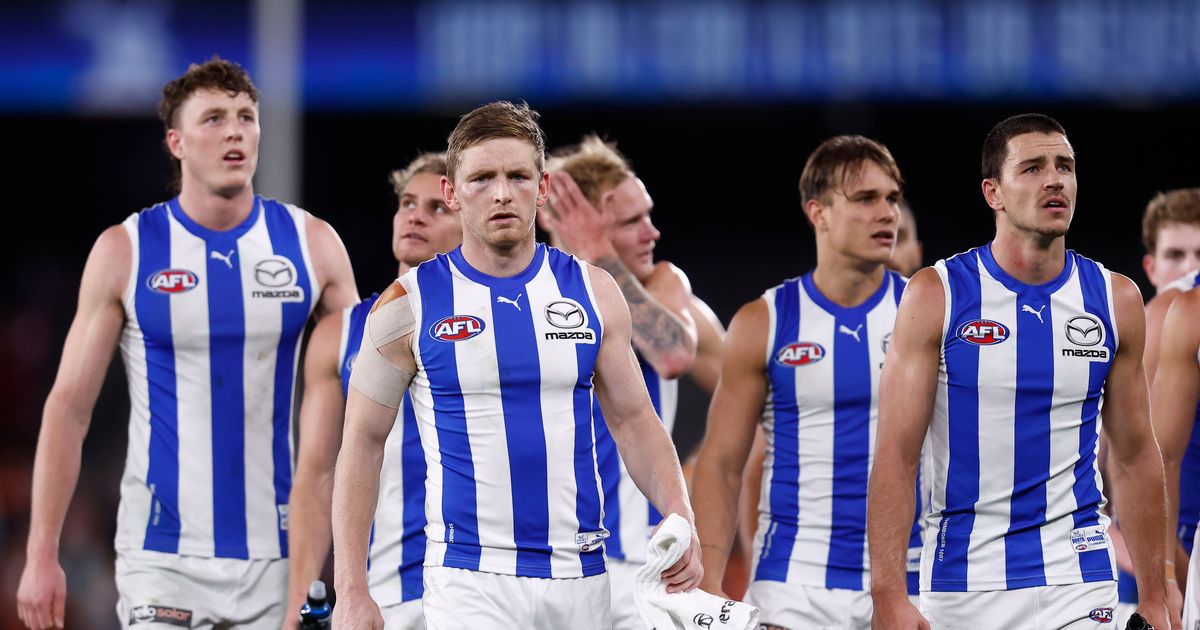 DESPITE falling to an 11th straight defeat on Sunday afternoon, North Melbourne coach David Noble isn’t concerned about losing his position in the hot seat, believing the bye has come at the right time for his side to “reset” heading into the back half of the season.

The Kangaroos’ difficult season continued as they head into the bye off the back of yet another defeat, this time at the hands of Greater Western Sydney who put them to the sword by 49 points at Marvel Stadium.

With each passing loss, the pressure continues to mount on Noble, who remains confident in what the club are trying to achieve despite their poor run of form.

“No, I’ve been really clear, the board have been terrific,” he said post-game.

“I’ve been regularly in contact with the board around what we’re doing, our plan going forward. The early stages of rebuilds are really difficult.

“The defence is the one that’s really annoyed us. In that sense of not being able to just manage the scores against us. Some poor options, some decision-making at times, some structural pieces, I think that we can get better.

“So I think the break comes at a good time for us to reset and re-look at what we might do in that back end and also up forward.”

Noble said his side will focus particularly on their defensive and attacking frailties throughout the break, after conceding over 100 points for the ninth straight week and failing to kick over 55 points for a sixth consecutive game.

“We’ll be looking at it, we won’t be sitting back,” Noble said.

“We’ll set some clear plans in the second half of the year. We’ll get this game reviewed pretty quick and we’ll start some really detailed, resetting of where we want to go in the back half of the year.

“The one thing that we’ve been disappointed with in the last month is sometimes the lack of discipline to actually just stay on your man and just defend.

“We were taught those elements of our game through junior footy. Forwards play in front, backs defend your man pretty tightly … It’s not sustainable.”

Noble is hoping to get a number of players back from injury after the bye including Ben McKay, Cam Zurhaar and Aiden Bonar along with mid-season draftee Kallan Dawson.

Meanwhile, Giants interim coach Mark McVeigh was pleased with the attitude his side showed early in the contest, which helped put the result beyond doubt in the first half.

However, McVeigh called for his charges to be more ruthless after failing to significantly build on their 47-point half-time lead.

“Historically, coming off a break, we haven’t performed too well over the last few years. I thought the attitude was right there to play the right way,” McVeigh said.

“It started in the midfield. Our smaller mids got a lot of damage done early although we were being beaten in the ruck considerably.

“But I thought the attitude, especially in the first quarter like we did in Brisbane to really put the scoreboard under pressure was really good.

“We clearly were dominating the game and you’d like to think that you could score a bit more.”

McVeigh said the Giants are bracing for the “worst” after Harry Perryman was sent to hospital following a nasty collision to his ribs in the second quarter.

“I know he’s being checked for ribs and a bit of lungs stuff … it looked nasty,” McVeigh said.

“We would probably expect the worst there. Unfortunately, he’s such a major part of our footy club and team so fingers crossed it’s not as bad.

“He’s well, he’s OK but with that there’s more likely something there but he’s in good spirits which is a good thing.”