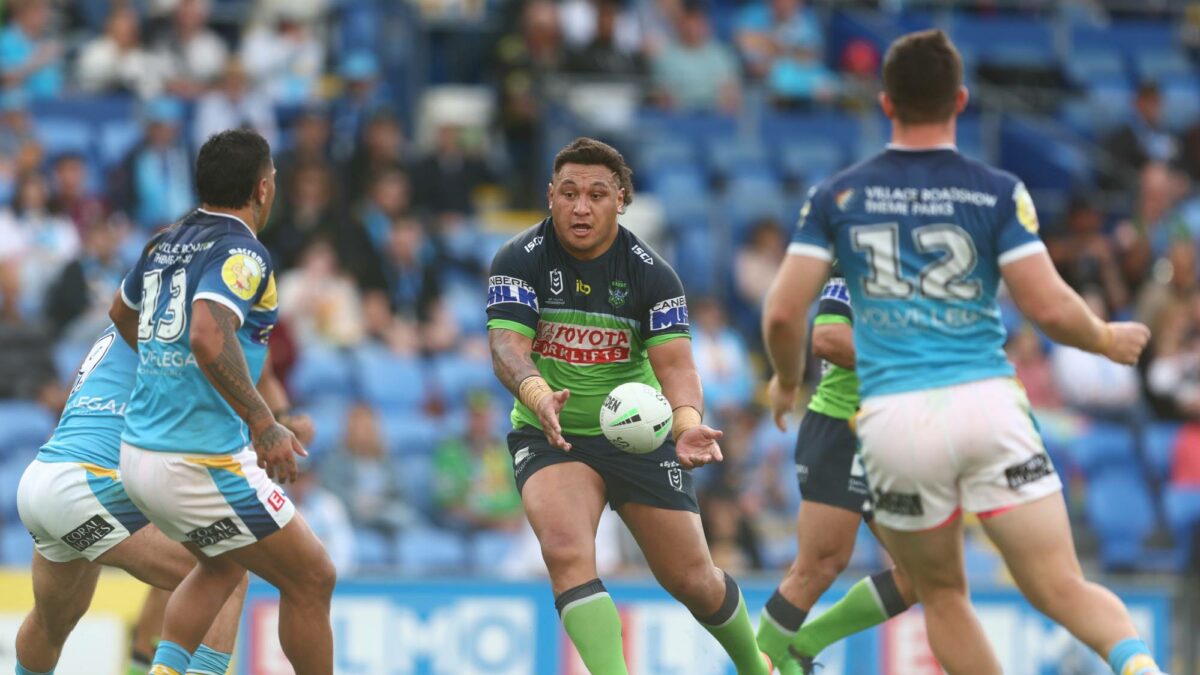 Canberra prop Josh Papalii has become the latest star to commit to playing for Samoa at this year’s Rugby League World Cup, declaring it a “movement” he doesn’t want to miss out on.

Papalii, who played for Samoa at the 2017 edition before representing Australia since, joins Penrith guns Brian To’o and Jarome Luai as the biggest names to pledge they’ll represent their families’ heritage at the tournament.

But Parish will hardly say no to the 30-year-old, who along with To’o and Luai will add to an already-impressive side that beat Cook Islands 42-12 in June’s Pacific Test.

Papalii said he felt a responsibility as a senior player to lead the way and represent his “motherland”.

“As an older player, I feel like it’s a movement I just don’t want to be missing out on,” he told reporters on Wednesday.

“Just seeing the likes of a few of the Penrith boys coming out and I’ve had few text messages from other players who haven’t come out yet saying they’ve put their hand up for Samoa.

“I have put my hand up to play for Samoa. Mal Meninga knows that and I’ve had a coffee with Mal as well to speak about what I’m planning to do … but that’s a long way from here, anything can happen in the next hopefully eight weeks.”

Papalii showed pride for his heritage after Queensland’s State of Origin win, posing behind the Samoan flag with other potential representatives Tino Fa’asuamaleaui and Jeremiah Nanai.

He admitted he wasn’t at his best when with the Samoa side at the 2017 World Cup and vowed to make amends for his side’s winless effort.

“I guess probably my last World Cup wasn’t the best, I sort of treated it as a little vacation and probably drank a bit too often, ate more than I should have,” he said.

“I’m looking to just play a bit of World Cup for the Motherland and represent my wife and my kids and especially my parents as well and just make Samoa proud.”

Jones baffled by NAS no charge

Egan needed to leave the field after the tackle in Friday night’s match, which left him with loose teeth, but the match review committee opted not to sanction the Storm forward.

Sydney Roosters prop Jared Waerea-Hargreaves was handed a grade one charge for a similar offence in round 20 but match review committee manager Luke Patten said the panel found Asofa-Solomona had only made “minor contact” with Egan.

Egan was able to return to the field and will line up for the Warriors against South Sydney this weekend but Jones questioned what kind of message the NRL had sent by opting not to charge Asofa-Solomona.

“It’s not a good message,” Jones said, “It’s baffled me a little bit, like everyone else.

“We’re all about protecting our players. The game is so tough and physical. Wayde was really rattled. It could have been worse but I thought (Asofa-Solomona) could have at least been charged.”

Jones said the NRL’s duty of care extended to the tackling player, as well as the ball-carrier.

Asofa-Solomona has incurred four match review committee charges this season, three for high tackles and one for making dangerous contact with a defender using his forearm. He escaped with fines on all four occasions.

Jones suggested punishing Asofa-Solomona more seriously could help deter him from similar incidents in future that may have the potential to injure.

“It’s about protecting Nelson too, in some sort of way,” he said. “He plays a physical game and the size of his body and the damage he could do to someone, it could turn out very nasty. I’m sure Nelson doesn’t want to have that on him.”

Egan’s teammate Marcelo Montoya said the NRL had set a precedent by opting not to charge Asofa-Solomona.

“(But) it can be dangerous. It was something that he probably shouldn’t have done.”

Sydney Roosters prop Lindsay Collins will take a break from playing in the NRL after suffering concussions in two consecutive games.

The Queenslander suffered a head knock in State of Origin III before getting concussed in last week’s NRL win over Manly for the Roosters.

Collins hasn’t been named in the Roosters side that will face Brisbane at the SCG on Thursday.

“It will be a couple of weeks,” said Roosters coach Trent Robinson.

“It’s hard because science doesn’t know what the answer is.

“We’ve seen when we’ve given a few weeks off to guys they’ve come back better.”

Sharks in battle to host final

The NRL could deny Cronulla the right to host a home semi-final if the Sharks secure a top-two finish for the first time since 1999 due to the outdated facilities at PointsBet Stadium.

The Sharks have been able to turn their home ground into a graveyard for rival sides this season.

Third-placed Cronulla have a 7-1 record at the ground and only a round-12 loss to the Sydney Roosters has prevented the Sharks from being undefeated at PointsBet.

But in previous years when Cronulla have earned a finals game at home they have had to move games to the old Sydney Football Stadium.

Broadcast, corporate and parking facilities play a factor in the NRL’s consideration of granting clubs a home finals game with the league set to inform clubs of their requirements to host finals fixtures over the next month.

“If we win a home-ground advantage, we would want to play at home,” Sharks chief executive Dino Mezzatesta told AAP after his club last hosted a home finals game at PointsBet Stadium in 2008.

“That’s our starting point and given we are a fair bit out we will continue to have dialogue with the NRL. We have had no problem selling out our games regardless of the timeslot.”

PointsBet Stadium is working at an 11,500 capacity due to renovations but NRL head of football Graham Annesley said that wouldn’t be a determining factor. Last year the NRL hosted finals games at Mackay’s 12,000-capacity BB Print Stadium.

“There’s not a specific (crowd) number because it’s a combination of not just a capacity but reserved seating,” Annesley told AAP. “The long and the short of it is that the NRL has to approve the venue.

“We haven’t reached any conclusion that we would relocate the Sharks should they qualify for a home semi-final. We need to go through the process with them and every other club.”

The Sharks’ alternative preference would likely be the newly-built Sydney Football Stadium, although if they were to face another Sydney club they would be ceding any of the advantage earned by their final ladder position.

The Sharks hope to have PointsBet Stadium back to around a 17,000 capacity by July but are one of the clubs who were expecting to receive NSW Government funding for an upgrade to their facilities.

Cronulla have an NRLW side entering the competition next year but, as things stand, will be unable to stage men’s and women’s double headers because of the infrastructure.

On the signings front, the Sharks have extended the tenure of young gun Kade Dykes, with the 20-year-old local junior re-signing until the end of the 2024 season.

With the ankle injury to Will Kennedy, Dykes has been promoted to make his NRL debut this Saturday against the Dragons, in front of a sell-out crowd on Sharks ‘Old Boys’ Day with more than 100 ex-Sharks players expected to be in attendance.

His father Adam and grandfather John also played for the Sharks making Dykes the second person in premiership history to be a third-generation player at the one club after Zac Fulton achieved the feat at Manly last week.

Adam, who was the 300th Sharks first grade player who debuted as an 18-year-old in 1995, played 183 matches in the top grade for the club, while John (No.112 on the all-time list) was a member of the team during the mid-1970s before becoming a lower-grade coach.

Broncos utility Te Maire Martin’s feelgood story of the year just got better with the 26-year-old signing a three-year contract with the Warriors, starting in 2023.

The former Panthers and Cowboys star has made a remarkable return to the NRL this year after a bleed on the brain forced the Kiwi international out of the game in 2019.

“Te Maire’s comeback to the game has been outstanding and we’re delighted we’ve been able to bring him home to New Zealand,” said Warriors CEO Cameron George. “He’s another quality player who will further boost our roster for 2023. With his ability to play at fullback and in the halves he’s going to be a real asset for us.”

The Warriors have been active in the player market following the mid-season losses of prop Matt Lodge and five-eighth Kodi Nikorima with fullback Reece Walsh (Broncos) and second-rower Euan Aitken (Dolphins) signed elsewhere next year and utility Chanel Harris-Tavita taking a year off from the sport.

Papalii opts for Samoa over Kangaroos, Jones ‘baffled’ by no charge for NAS, Collins takes break