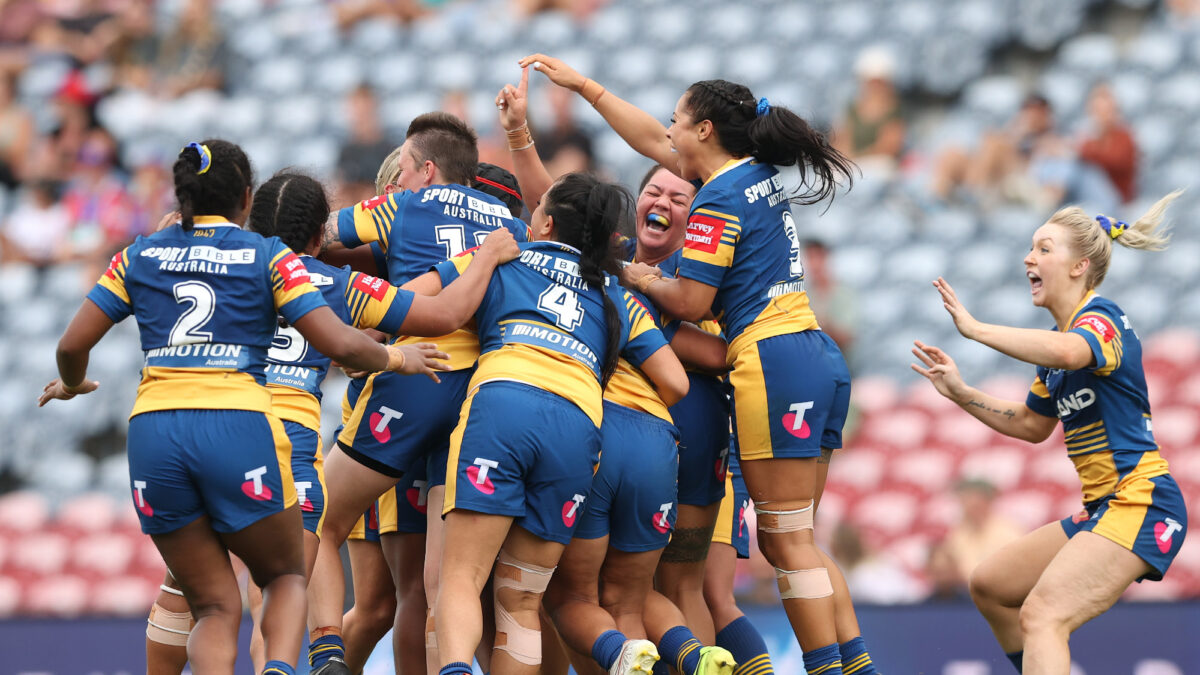 I suppose that’s what happens when you’ve not had a hit out in 488 days. There’s a lot of pent up aggression to let out.

That’s what we saw today: more claret than a French wedding, shots on shots and, thanks to a Maddie Studdon field goal with ten seconds to play, the finish that the day deserved.

For all that the last minute one-pointer will take the headlines, a better image might be that of Therese Aiton, the Parramatta hooker, sat on the bench with the biggest shiner you’ll see all year. It was a tough old day’s footy.

There were still plenty of combinations that need to be made, with three new teams making debuts, but the standard was still pretty high and the storylines are already developing.

Can anyone stop the Broncos? Will Parramatta Parramatta it? Can anyone catch Teagan Berry? Those are just some of the narratives we got from round one of the NRLW.

Pace and power key to the Dragons’ victory

If you read the The Roar’s preview of this game, you’d know about my burgeoning love affair with Elsie Albert and Teagan Berry at the Dragons.

Berry, stole the show in the u-19s with a 90m effort and got the first today, turning a half chance into a try with pure pace.

She only started playing rugby league in 2019 but before that was a competitive sprinter: so competitive, in fact, that she is still ranked as the 906th fastest woman on Earth.

Elsie Albert probably won’t hit 12.19 seconds in the 100m, but her role in Berry’s opener was crucial too.

The PNG Orchids captain stuck in a monster shot to dislodge the ball in the lead up and spent most the day putting the fear up the Titans.

Later on, with the game on the line, she took a hefty carry to the posts, stood in the tackle and delivered an offload for Quincy Dodd to seal the win.

It takes a lot to overshadow Kezie Apps, the NSW captain and a living legend of women’s rugby league, but Albert managed it.

Keep an eye on her next week – and all the way through to the World Cup in October.

Too little too late for Titans, but their day will come

This was the Titans’ first game in the NRLW, and if we’re being honest, it showed. They have good players – Destiny Brill and Evania Pelite went well today – but struggled to impose themselves early on against a canny Dragons pack.

Too often they gifted easy field position to their opponents via penalties and mistakes, heaping pressure on themselves and negating their own ability to build at the other end of the park.

Though the Titans rallied after the break and got themselves close, they had given themselves far too much to do.

It’s not that they were inexperienced, because on an individual level, they aren’t, but they seemed a second behind the Dragons in terms of cohesion.

Before the game, coach Jamie Feeney challenged his players to work hard and play for each other. In that regard, he will be happy, because there was no doubting effort and togetherness.

Where they fell down was in-game smarts and management – which is understandable, because the Dragons have played lots of NRLW and the Titans haven’t.

If they want some encouragement, they could do worse than to speak to Kezie Apps and Holli Wheeler: they played in the Dragons inaugural game in 2018, when they ran into a much more experienced Brisbane Broncos side and copped a 30-4 battering.

You can’t coach playing together. That will come, and when it does, that will enable their star players to shine.

How is anyone going to beat this Broncos pack?

Tamika Upton. Ali Brigginshaw. Tarryn Aitken. These are some of the best women’s rugby league players in the world.

They’re nothing if they can’t play, however, and as any fule kno, in rugby league you have to earn the right to play.

So let’s talk about this Broncos forward pack. Millie Boyle is great, a genuine star who is breaking out of the shadow of the three names above. Chelsea Lenarduzzi is as been-there, done-that as anyone going around in the NRL.

Millie Boyle of the Broncos makes a break to score a try during the round one NRLW match between the Sydney Roosters and the Brisbane Broncos. (Photo by Ashley Feder/Getty Images)

Amber Hall and Tallisha Harden started in the 11 and 12, and when Hall goes off, you get Roxette Murdoch, one of the standouts in the English Super League.

It’s a level of physicality that basically nobody in the NRLW can cope with. The Roosters certainly couldn’t.

One of the issues that the NRLW has faced has been splitting up the Broncos team that has won every edition of the tournament, because there’s too much talent concentrated in one place.

Don’t blame the Broncos for that though – they’re doing exactly what they should be doing, and anyone who beats them is going to have to get through that pack.

What did I say about earning the right to play? The Roosters battled and battled through the middle but got nowhere.

Obviously, with this Broncos forward group, that was never going to be easy, but the Roosters never really tried to change the point of attack and ask a different question of their opponents.

When you’re beaten up front, you have to go wide and try to move the larger pack around. In Jess Sergis and Isabelle Kelly, the Roosters have the best strike centres in the comp and could have done plenty more to get the ball to them.

It didn’t help that Zahara Temara, their best option to shift the ball, missed a chunk of the game injured or that Corban Baxter, their other link player, was missing together after testing positive in the buildup.

Sergis and Kelly showed their quality at points with excellent defence – one tackle from Kelly in the first half was outstanding and saved a certain try – but they never got what they needed with ball in hand.

It took until the final quarter for the Roosters to shift early, and Sergis found herself galloping through a hole. Kelly played the last 15 minutes at five eighth and it probably wasn’t a coincidence that it was the best period of the game for the Roosters.

It makes you wonder what might have been possible if they’d tried it earlier.

Newcastle don’t boast the star power of Parramatta. If we’re being honest, they don’t have the names to match any of the other five teams in the comp, but based on this performance, they might have one of the best teams.

They have some strike, as Romy Teitzel amply demonstrated for the first try, but this was all about the collective effort.

For all Parramatta’s attacking threat through Bottile Vette-Welsh and Maddie Studdon, the Knights were consistently able to negate the Eels through superior organisation.

It was a double-edged sword for Newcastle: they had 17 leaders out there, in one sense, with everyone standing up, but also lacked nous at crucial moments, as evidenced by repeatedly being caught on the last tackle in attacking areas.

Autumn-Rain Stephens-Daly and Tahlulah Tillett were both making their NRLW debuts in the halves, so perhaps a lack of experience can be excused – when it came down to it with 10 seconds on the clock, it was Maddie Studdon, as experienced as they come, who made the difference.

It will be hard to take, but the Knights can take plenty of heart from this performance.

On the stats side, Newcastle completed better, had more possession, kicked longer, made fewer errors and won the penalty count. You won’t go far wrong with numbers like that in rugby league.

Maddie Studdon of the Eels celebrates with teammates after kicking the match-winning field goal against the Newcastle Knights. (Photo by Ashley Feder/Getty Images)

Forget RTS and CNK, BVT is the only Kiwi fullback you need to know

The fullbacks were all superb today – probably the standout position across the three games – and they saved the best for last.

Romy Teitzel, the Knights captain, grabbed the first try, but even she was outshone by Botille Vette-Welsh.

She set up a try early on through a long range pass to her winger, only for it to be (correctly) disallowed, but thereafter, the Knights never knew if she was going to stick or twist.

Vette-Welsh was the pick of the Parra spine, but ably assisted. Maddie Studdon has the weight of the world on her at halfback, but did her bit in getting the ball where it needed to be, especially in getting good service to Vette-Welsh out the back, before icing it with the game on the line.

On the other side, Sereana Naitokatoka was a livewire and got up off her back after being postage-stamped for a Knights try to draw defenders and send her captain, Simaima Taufa, in for a vital score.

It’s encouraging for the Eels, who got the job done despite not being at their best. Did anyone say it’s their year?