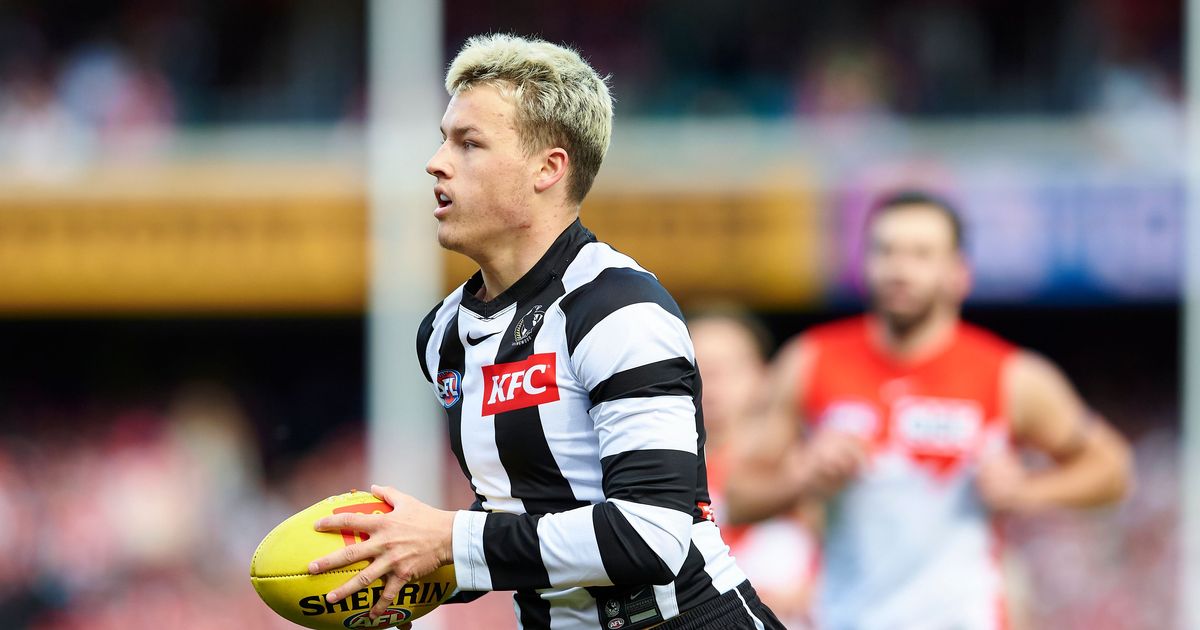 COLLINGWOOD is hopeful Jordan De Goey will be available for next Sunday’s finals-shaping clash against Carlton, but Jack Ginnivan is likely to miss the blockbuster at the MCG.

De Goey was a late withdrawal ahead of the game against Sydney at the SCG on Sunday, after injuring his hip flexor at training on Friday.

The 26-year-old travelled to Sydney with the team on Saturday but was ruled out before the bounce.

Magpies coach Craig McRae said the risk of further damage wasn’t worth the reward of playing De Goey, with a finals series to come.

“He pulled up pretty sore after training on Friday. We thought: well he has 48 hours, so we’ll bring him up here and do some work. He just wasn’t improving,” McRae said after the 27-point loss to Sydney.

“We probably made the decision yesterday afternoon, to be honest. We gave him the night to sleep on it and see if he made some improvement.

“It is just a tight hip flexor. Are we confident he plays next week? Somewhat. He’ll just need to get through training and see what it is.

“There is a lot to lose at this time of year. If you put out a guy not at 100 per cent you can potentially do a lot of damage. There is a bit to play out this week.”

Ginnivan was substituted out of the game at half-time after experiencing hamstring tightness in the second quarter.

McRae doesn’t expect the second-year sensation to be available to play against the Blues, but is confident Ginnivan will be available for the first week of September.

“He played the last ten minutes (of the second quarter) and even kicked that goal with a tight hamstring, so it was bordering on a strain,” he said.

“We’ll work through that and see what it is. Pretty unlikely to play next week I would have thought.”

Dual All-Australian ruckman Brodie Grundy was ruled out for the rest of the season earlier in the week, while vice-captain Taylor Adams is expected to be available for the first final.

Sydney ended Collingwood’s stunning 11-game winning run in emphatic fashion at the SCG, handing the Magpies their first loss since round nine.

Sydney can secure a top two spot on the ladder next weekend if it beats St Kilda at Marvel Stadium and maintains a percentage advantage over Brisbane or Melbourne, who face each other at the Gabba on Friday night.

Swans coach John Longmire said the club won’t think beyond round 23, but knows two home finals at the SCG are on the line in the final game of the home and away season.

“It just gives us an opportunity to make sure we have our destiny in our own hands next week,” Longmire said.

“In these situations, you do have to control what is right in front of you. We’ve been saying that for quite a while. This week we’ll review, train and prepare for the Saints.

“We’ll need to finish off really strongly and not step away from what we know works. For four quarters we did it really well. Next week we get another opportunity for four quarters.”

Sunday was about more than just four premiership points at the SCG, with Sydney celebrating 40 years since the club moved from South Melbourne to the Harbour City, Isaac Heeney’s 150th game and paying tribute to the sensational career of Josh Kennedy after the former skipper announced his retirement on Tuesday.

“When you’re in our situation, I’m very much about controlling the performance and the preparation of the team. But it was a pretty special moment during the week with Joey. He’s been a legend of the footy club, so for him to be able to bow out the way he did but also still be involved the way he did,” he said.

“To have the 40-year anniversary was really important for the footy club. a lot of people on the ground but also off the ground have done a lot of hard work for this footy club. there have been some really challenges over the journey. I think it was the second biggest home and away crowd here was a good acknowledgement.”