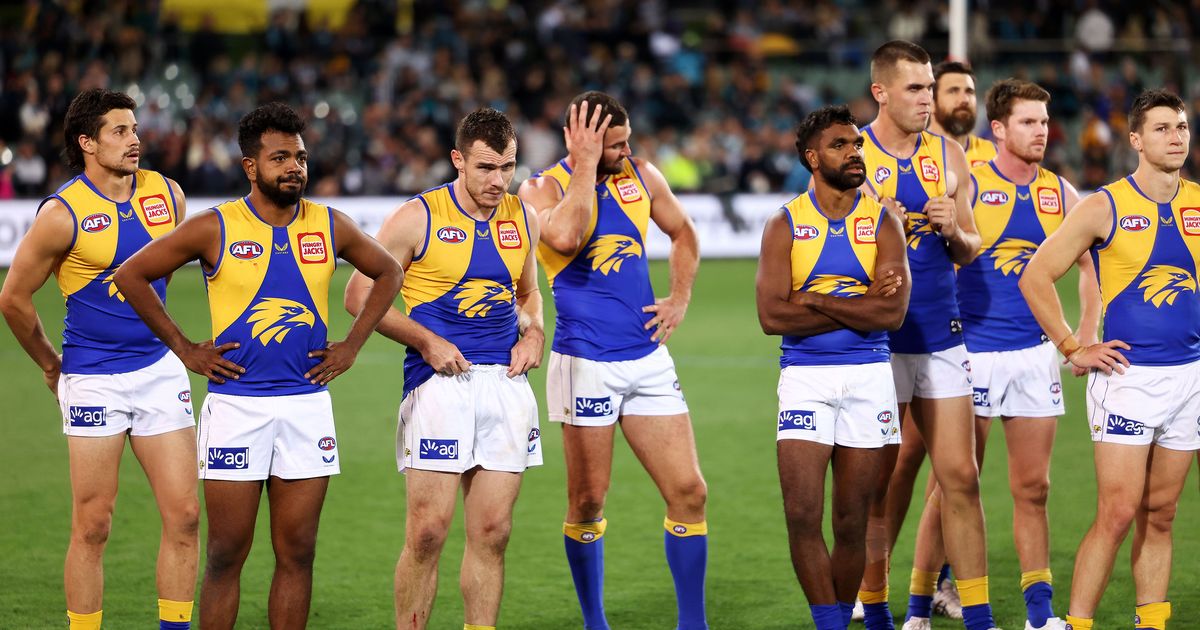 The Eagles are 17th on the ladder with a 1-5 record after a difficult start to the 2022 season, which hasn’t been helped by several key injuries and a long list of players entering health and safety protocols.

Adam Simpson’s side was premiers in 2018 but has gradually slipped out of contention, finishing sixth in 2019, seventh in 2020 and missing the finals altogether last year.

The situation has led to calls that the Eagles need to begin their rebuild by transitioning out older players, blooding youth and targeting the draft, having not had a top-10 pick since 2010 when they took Andrew Gaff.

“We don’t think like that. Rebuild is sort of the last thing on our minds right now,” Kelly said. “The main priority we’ve got now is getting back to our best footy and winning games.

“The opportunities are going to be there, but for us it’s playing a team that we think is going to win games and getting back to winning.”

West Coast gave up plenty to bring Kelly to the club ahead of the 2020 AFL season believing its premiership window was wide open.

The Eagles traded two first-round picks (2019 and 2020 NAB AFL Drafts), along with picks 24 and 33 to land Kelly from Geelong in the 2019 Continental Tyres AFL Trade Period.

Kelly brushed off questions about playing the peak years of his individual career during a rebuild.

“I’m not really thinking too far ahead,” he said. “I’m just locked in right now with everyone at the club. Everyone’s job right now is do everything we can to get back to winning ways.”

When asked if he anticipated the Eagles enduring this situation when he joined from the Cats in late 2019, Kelly paused and replied: “Yes and no. You never know what’s going to happen.”

The Eagles will be back in the spotlight when they host 2017, 2019 and 2020 premiers Richmond at Optus Stadium on Friday night. West Coast was blown away by Sydney by 63 points less than a fortnight ago when put on centre stage on Good Friday.

“Obviously it was disappointing what we dished up a couple of weeks ago on a Friday night timeslot,” Kelly said.

“The whole country is watching, home crowd, all of that, playing in front of friends and family you want to play well. It didn’t work out for us a couple of weeks ago but we get the chance to fix that. Obviously we want to play well in these timeslots.”

Kelly said Gaff had looked good at training as he presses to return from an ankle injury while he backed mature-age draftee Greg Clark for a potential debut with Elliot Yeo unavailable due to concussion.

“I thought he probably would’ve played round one had he not injured his shoulder in pre-season,” Kelly said about Clark.

“Very unlucky but he was always going to get his opportunity at some stage. He’s been great from the moment he walked in.”

Kelly also backed Yeo, who has battled injuries in recent seasons, after he came under fire from commentator Kane Cornes for being “clearly out of shape” following his recent return from a pre-season calf injury.

“I think you need to cut Yeoy some slack,” Kelly said. “He’s someone who has just had a horrible run, injury after injury. This is a tough game we play and you need continuity.

“In order to find your best footy, you need to be able to get into a rhythm. He hasn’t had that luxury since I’ve been here basically. Then it’s being match-hardened and having that behind you. He’s missed a lot of footy. I think he’s been a bit harsh done by there.”