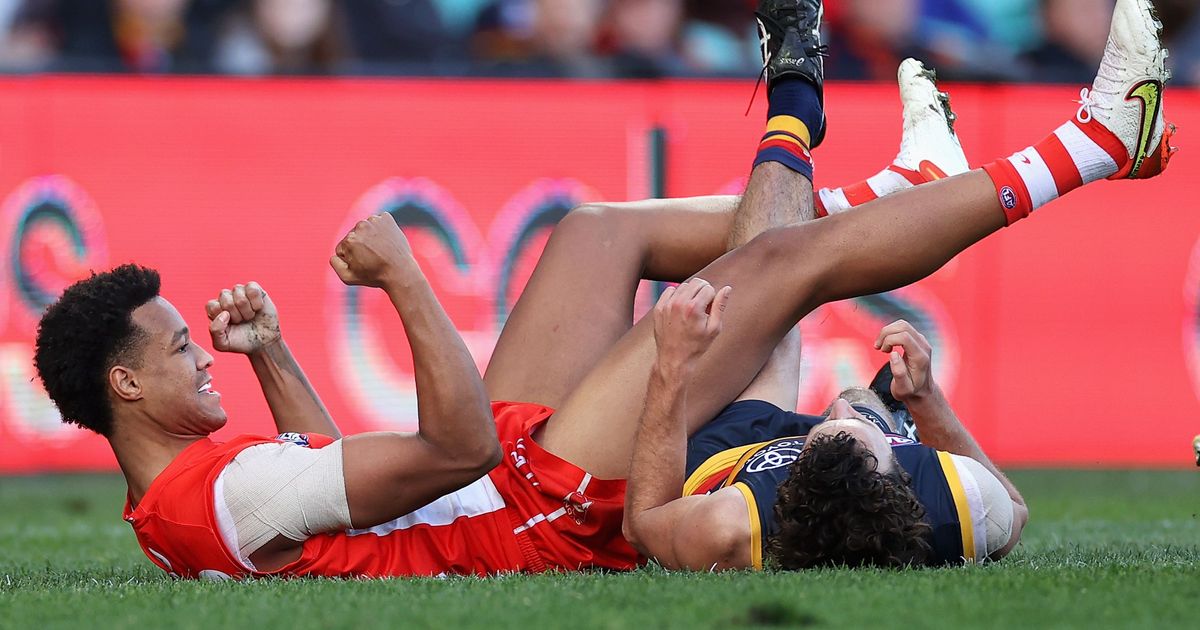 That is all it took for Sydney to put enough distance between itself and Adelaide to never be threatened at the SCG on Saturday afternoon, despite the Crows outscoring the Swans across the final three quarters.

Sydney kicked those five early goals and finished with 9.3 from 20 inside 50s to register the highest opening quarter score of the season, before doing enough to defending their early advantage to eventually win by 33 points.

When Callum Mills kicked Sydney’s tenth goal 45 seconds into the second quarter, the margin was 48 points and things looked ominous for Adelaide.

But bit by bit, Matthew Nicks’ side halted the Swans momentum and gradually pegged back the margin to ensure John Longmire endured a frustrating day on the interchange bench before it finished 17.16 (118) to 12.13 (85).

The Crows will return home without the sixth win of the season they were searching for, but they will return with some confidence after kicking 10 of the 16 goals registered after quarter-time in a head-scratching game in conditions that started wet but finished dry.

Sydney’s trio of star forwards – Lance Franklin (three goals), Isaac Heeney (two goals) and Tom Papley (two goals) – had days where they could have finished with more, but did enough to lead the Swans to a third straight win and 12th overall to move them level with fourth-placed Brisbane, half a game adrift of Fremantle which drew with Richmond on Friday night.

Papley was the instigator early. The 2021 All-Australian burst out of a centre bounce with the ball, got it back and then drilled a goal on the run from 55m out, celebrating almost as soon as the ball hit his boot, slotting two first quarter goals in a term that was reminiscent of a fortnight ago against the Western Bulldogs.

But the early minutes of the second quarter onwards, Papley and the Swans had a performance where they flaunted the gulf in class between the two sides – one is a premiership threat, the other is a bottom four side – and were never fewer than three goals ahead.

Franklin was engaged in an intriguing contest with Adelaide key defender Nick Murray, who limited the four-time Coleman Medallist for a large part of the game, but couldn’t prevent the Sydney star from continuing his rise up the record books.

Months after becoming just the sixth player in AFL/VFL history to kick 1000 goals, Franklin surpassed Geelong icon Gary Ablett snr (1031 goals) to move up to No.5 on the all-time goalkicking leaderboard and finished the afternoon with 1034 next to his name.

With Greater Western Sydney, North Melbourne, Collingwood and St Kilda to come in the final month of the season, Sydney is well placed to unseat one of the current top four and arrive at the start of the September with the double chance.