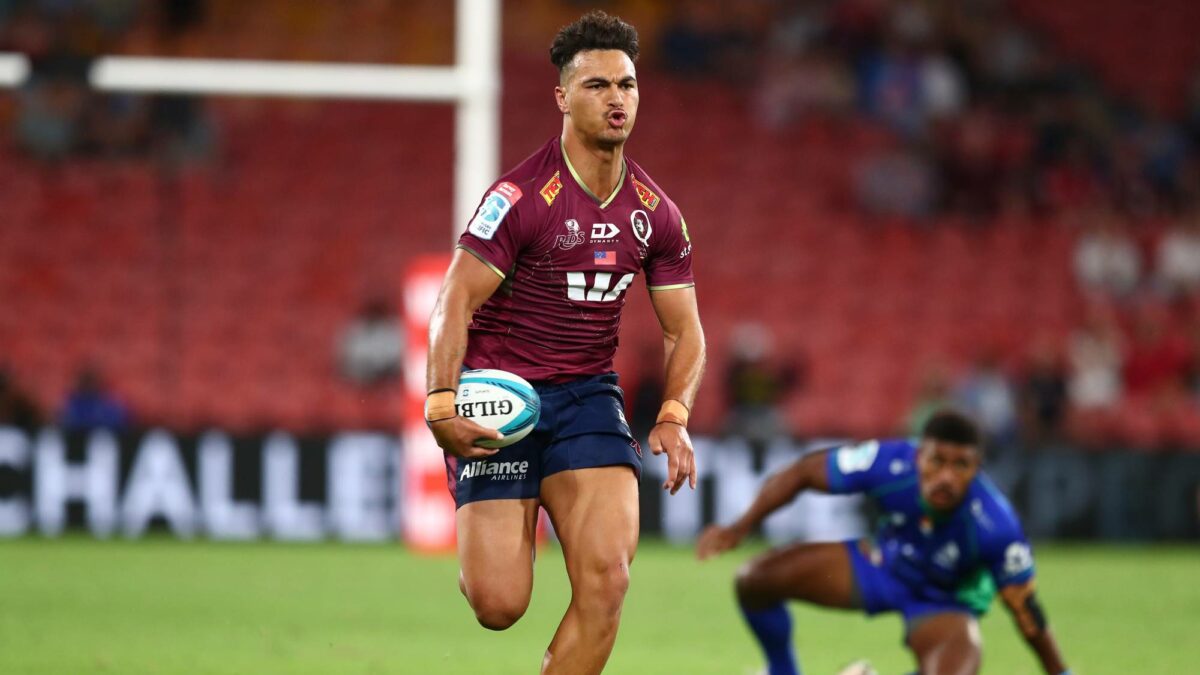 Queensland Reds have welcomed back Jordan Petaia and Suli Vunivalu to their backline as they try to arrest a worrying run of form, but Jock Campbell has retained the No.15 jersey he’s worn in Petaia’s absence.

The Reds made five changes to their starting XV to take on the Highlanders in Friday night’s clash at Suncorp Stadium.

Petaia and Vunivalu are set to feature after recovering from minor hamstring injuries. Seru Uru and Lukhan Salakaia-Loto return to the starting team after making successful comebacks from injury last round, while Feao Fotuaika will make his fourth run-on appearance of the season at tighthead prop in place of the injured Taniela Tupou.

Josh Flook will shift to outside centre with Hunter Paisami ruled out with a minor shoulder injury suffered against the Chiefs last round.

“It’s something we probably missed quite a bit last week, just strike runners,” Reds captain and halfback Tate McDermott said of the return of Petaia and Vunivalu.

“They’re the type of players that can create something out of nothing and that’s something we’ll need against the Kiwi teams, particularly the Highlanders, with good defence.”

Victory against the Hurricanes could put the Reds back above the Chiefs, who host the Brumbies, into the top four.

And it would silence any doubts before a tough regular season finish that features away games to the top-ranked Blues (9-1) and Crusaders (third, 7-3).

Even without Tupou (calf) in the side there will remain an elephant in the room as the Reds chase just their third win from the last 25 games against New Zealand opposition.

“No, I don’t think there is a mental barrier, but we’ve got to prove there isn’t,” McDermott said.

“We’re just coming up against better opposition and we’re learning that if we keep 15 players on the field we will win a game.”

Indeed the Reds’ 11 yellow cards are four more than any other team, while they are second in penalties conceded behind the Waratahs.

The Chiefs controversially took advantage of the Reds’ weakened scrum once Tupou limped off at halftime, earning constant penalties that proved the difference in a loss McDermott said took days to get over.

Harry Hoopert and Feoa Fotuaika will bookend the front row on Friday, while former Reds prop Albert Anae is back at Ballymore and will come off the bench after being drafted in as injury cover from Japanese rugby.

McDermott expects the same again from the Highlanders, who will be led by savvy No.9 Aaron Smith.

“I think they will target the scrum; you look at that second half (against the Chiefs) but I back our guys to do a job there,” he said.

“I’m not into the intricacies of the scrum world, but I know those guys have done a job before and can do again.”

Waratahs Head Coach Darren Coleman has named an unchanged backline but added three new faces to his forward pack that defeated the Crusaders for their match against Moana Pasifika.

Dave Porecki starts at hooker after recovering from a concussion suffered early in the match against the Chiefs in Melbourne.

Harry Johnson-Holmes has been ruled out with a knee injury and will be racing the clock to be fit in time for the finals.  Archer Holz lines up at tight-head prop and makes his first career run-on start for the Waratahs.

Geoff Cridge starts in the second row alongside Jed Holloway, with Hugh Sinclair set to provide impact and leadership off the bench.

Despite losing two Wallabies to injury, Coleman was excited about the depth building within the squad.

“Obviously we had a few forced changes there with Harry Johnson-Holmes and Hoops, but that provides a good opportunity for the guys that come in,” Coleman said

“Archer has been building his match experience and exposure to Super Rugby, so it’s going to be a really good test for him, and we also have the experience of Ruan backing him up off the bench.

“Mahe was great for us and will no doubt feature again going forward but coming off 74 minutes in his first-ever start, there’s the potential he could be a little flat this week.

“Porecki and Horton add a couple of fresh bodies to the side, and we feel they will help us run the bigger Moana team around.”

Brumbies coach Dan McKellar has made just two changes to his starting side for Saturday evening’s clash at FMG Stadium Waikato, both coming in the front-row.

James Slipper rotates with Scott Sio at loosehead prop, with Folau Fainga’a also coming into the starting pack at hooker.

Backrower Tim Anstee will start in the number 8 jersey, with Wanneroo talent Ollie Callan moving to the right flank.