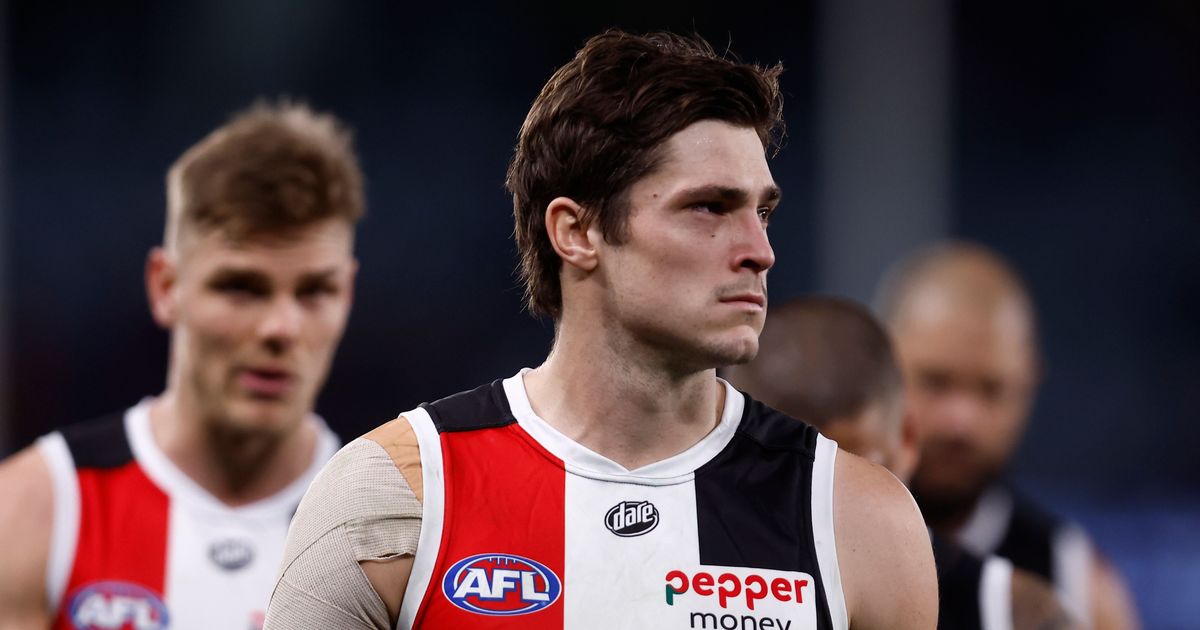 ST KILDA coach Brett Ratten says the Saints are running out of chances to resurrect a season that saw them reach the mid-season bye at 8-3, but has now seen them lose five of six games following Friday night’s bitterly disappointing showing against the Western Bulldogs.

The Saints were blown off the park in the opening half, conceding the first seven goals of the game – including all five goals of the first quarter – to reach half-time six goals behind after laying only 11 tackles.

They finished the better of the two sides to improve the margin and most of the key indicators, but that won’t polish a performance that has St Kilda’s season hanging in the balance.

Ratten said a lack of pressure from early in the first quarter was a key reason behind the 28-point loss at Marvel Stadium, which is likely to see St Kilda end round 18 a win outside the eight.

“If we produce that and the second half against Fremantle and then you can just take some of the other games post the bye – the Essendon performance was no pressure in the game allowed Essendon to transition as well – we are running out of time very quickly,” Ratten told reporters on Friday night.

“I thought the first five to ten minutes we were up for the fight. The pressure was high, then some really costly turnovers that deflated our confidence and we went back into our shell. I think we had 11 tackles in the first half; it’s not where we want to be.

“One of our KPIs tonight was pressure and it just fell away. As a team, in this space, Friday night, we’re trying to make finals, we’re trying to get into the finals and we deliver that performance is below par. Our pressure has been up and down in games. When it has been poor, opposition has punished us. that happened again. Our pressure was not to where we want it to be.”

Ratten said a problem since returning from the mid-season bye has been wrestling back momentum when challenged at the start of games or in quarters.

“No, we didn’t (look mentally on at the start of the game). Our resilience before the bye was really sound and we’d fight and scrap, but post the bye we’ve been inconsistent in that space, let run ons go for too long and not claw it back,” Ratten said.

“The boys were talking about the communication levels were down on the field and that’s just a lack of confidence or going into your shell. When the game is going against it, do you sit on your haunches and just wait and say should we have done something?”

Veteran ruckman Paddy Ryder was substituted out of the game in the third quarter with Achilles soreness and could miss next Sunday’s game against West Coast at Optus Stadium, making a bad night even worse for the Saints.

“We’ve just got to be wary of a player at 34, nearly 35, who has had a history of that. Whether he plays next week or not we’ve got the eight days, which might help him. It will be touch and go,” Ratten said.

While the Bulldogs breathed life into its season by winning a must-win game, the club endured a nervous morning while waiting for COVID-19 test results following an outbreak at the club this week.

“Absolutely there was (a fear there could be a spread). Everyone had to test this morning and we were holding our breath,” Beveridge said in his press conference.

“We had a training session with the boys who didn’t play because there is a bye at state league level with our Footscray team. They were scheduled to train. We were toey, thought we might have to pull a couple of the boys out from that training session and bring them into the game tonight. A couple of the boys who played tonight were a bit late out of bed and tested a bit late.

“We are all on our toes. Travvy Varcoe has been crook for a week and a half, we haven’t had him at the club, Matt Spangher’s got it so he wasn’t here tonight. Brent Prismall our welfare manager who helped us on the bench has got it as well.”

The club was on high alert in the rooms after the win, ensuring everyone non player, football department or administration member was wearing a mask, unless they were part of the broadcast on Channel 7 or Fox Footy.

The Western Bulldogs are now level with Richmond – who face North Melbourne on Saturday – and St Kilda, with five rounds to play in the 2022 home and away season.