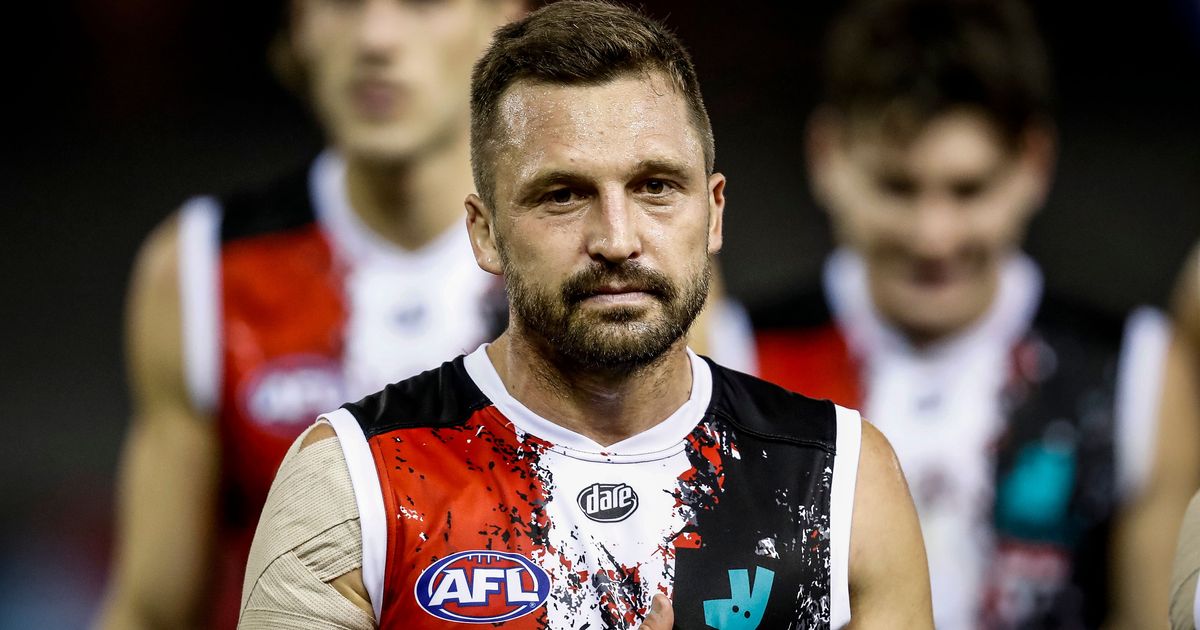 VETERAN defender Jarryn Geary has stood down as co-captain of St Kilda after five years in the role.

The 33-year-old was passed the baton from champion forward Nick Riewoldt – St Kilda’s longest-serving skipper – ahead of the 2017 season and led the Saints on 66 occasions.

AFL.com.au can reveal Geary announced his decision to the playing group during an emotional meeting inside RSEA Park on Tuesday morning.

It leaves star midfielder Jack Steele, who inked a five-year contract extension last month after winning a second consecutive Trevor Barker Award and Therabody AFL All-Australian blazer, in the box seat to become sole skipper after sharing the role with Geary in 2021.

St Kilda coach Brett Ratten will commence the leadership process in the next few days, but this week has been about the selfless warrior from Eaglehawk who was plucked with pick No.58 in the 2006 NAB AFL Rookie Draft – the fifth-last pick – and is still standing, despite undergoing his 24th surgery late last year.

“I think the decision is something I’ve been thinking about for 18 months,” Geary told AFL.com.au at RSEA Park this week.

“After the 2020 season, I had conversations with ‘Steeley’ about leading. I thought it was time for someone else to step into that role, whether it was with me or without me. In the end, we decided for that year it was going to be both of us. He did a great job, basically by himself in the end on game day.

“Post-season I had another think about it and thought it was the right time. I had a few chats to ‘Ratts’ and it was my decision. But for something that I had my head around for 18 months it was more difficult to voice than I thought it would be. I started getting a croaky voice because the role meant so much to me. Not so much the title – the title is great and I’m really proud and privileged to have been in the position for five years – but knowing the boys wanted me to lead the footy club for five years. Letting go of that was probably more difficult than I thought.”

Geary actually sat down with Ratten inside his office on Linton Street this time last year and was prepared to hand over the role if the club thought it was the best thing to do. The selfless act wasn’t lost on the senior coach – and many influential figures around the club – and was a major reason why Ratten wanted him to continue for a fifth season.

When Geary took over from the six-time Trevor Barker Award winner ahead of Riewoldt’s 17th and final season, the Saints weren’t blessed with many options. The external noise centred on Jack Steven, but the reality inside Seaford was unanimous. Seb Ross was well regarded but too young. Geary was clearly the most highly thought-of leader, loved by the young and the old, both in the football department and across the administration. Fast forward five years and the Saints are in a far better position leadership wise, with a readymade replacement in Steele who has been eased into the role over the past 12 months.

“I think when Nick [Riewoldt] left and ‘Joey’ [Leigh Montagna] left we had a gulf there in leadership. A lot of those players that came through in the leadership group with me aren’t at the club anymore for a variety of reasons. I certainly feel we are in a better position now than we were two, three years ago,” he said.

“‘Steeley’ has come a long way really quickly. That was a big part. The thing about Steeley is it probably took some time to realise his capabilities in that space. He openly admits he isn’t the most outgoing person and he probably didn’t have a lot of confidence in himself, but once his footy went to that level that he can play in his own right he saw that he was a leader. I’ve seen this coming for a long time.”

When Jack Billings walked into the football club as an 18-year-old who had just been taken at pick No.3 in the 2014 NAB AFL Draft, he quickly gravitated to Geary. The teenage sensation from the city and the hardened former rookie from the country clicked. It didn’t take long to find out why Geary was – and has always been – highly rated for his actions.

Much like former Collingwood premiership captain Nick Maxwell more than a decade ago, Geary’s profile has never quite fit the size of the role. It is why outsiders thought Steven was a better option. But profile and outside praise have never interested the 207-gamer.

“He replaced ‘Rooey’, who is obviously a champion of the club, and Gears has often spoken about not comparing himself to some of the past captains because some of them are legends and champions of our club. The thing I like the most was he never tried to be someone he wasn’t, he just did it his own way. That’s what made him such an influential leader. I think that’s really important,” Billings told AFL.com.au.

“For him, as a player and person, he has never been big into the media stuff so that’s why he isn’t a bigger name or have a lot of hype around him. That’s not important; that’s not why you play the game; he plays the game because he loves it and loves his teammates. He doesn’t care about outside noise or the opinions of people outside the football club. Again that’s a good lesson for the rest of our players.”

Tim Membrey arrived at the Saints as a highly rated delisted free agent from Sydney at the end of 2014 and has established himself as one of the more reliable medium-sized forwards in the AFL. He thinks of the word connection when he thinks of Geary. Not only has Geary been the connection to the 2009 and 2010 years under Ross Lyon, but he has built a connection with every single player that walked through the doors at Moorabbin, then Seaford, then back to Moorabbin.

DEGREE OF DIFFICULTY Who has the hardest draw? We break down the 2022 fixture

“The legacy that he is going to leave at this football club when he’s done is purely just his ability to connect with the younger guys, the older guys and making everyone feel welcome,” Membrey said.

“At the same time, he is a very challenging player himself. He always challenges individuals but at the same time he is someone who puts his arm around you. He’s done an amazing job. He’s had his challenges with injury, but he has certainly left a great legacy at the club.”

Geary has endured a nightmare injury run in recent years, managing only three games in 2021 after breaking his leg in a pre-season training session at the end of January, before suffering a season-ending shoulder injury in June.

The small defender only played five games in 2019 after requiring emergency surgery on his quad due to compartment surgery, which left a nasty scar. Then he broke his leg in China and ended up in a Shanghai hospital.

“I’m slowly building into the pre-season. I should be back in the main group in the next few weeks. It’s been frustrating,” Geary said.

“At times you just shake your head and wonder how it’s panned out this way because they’ve all been injuries I haven’t been able to control; they haven’t been soft tissue injuries; they’ve all been contact injuries, so it is what it is. It would have been nice to be out there a bit more in the past few years, but hopefully I can get a good run at it this year.”

Despite being out of contract when his shoulder popped out for the second time in a fortnight when he tried to tackle Sydney superstar Lance Franklin last year, Geary never contemplated pulling the pin on his career. He didn’t want to exit the game on those terms. And that’s why he is back for a sixteenth season where he may no longer be a certain selection in St Kilda’s best 22.

“I didn’t want to finish that way. I felt I had a little bit more to give. As funny as it sounds, my body feels pretty good; I’ve had 24 surgeries but my body actually feels pretty good so hopefully I don’t break anything this year,” he said.

“I’ve always been the same. My career didn’t start out playing a game every week, I was in and out of the team constantly and always felt I needed to prove myself and probably still felt that way even as captain. I’ve never really felt any differently.

“I suppose the thing for me is I feel like I still have the capacity athletically to contribute. It is a strength of mine – I can run and I’m not slow – so that probably gives me a good opportunity to play. I know that I have to perform. It is probably going to be up to the guys below me whether I play every week.”

Geary was overlooked in that draft and wasn’t taken until pick No.58 in the Rookie Draft – the fifth last live pick. But after 207 games, four different senior coaches and a handful of serious injuries, Geary isn’t done with just yet.