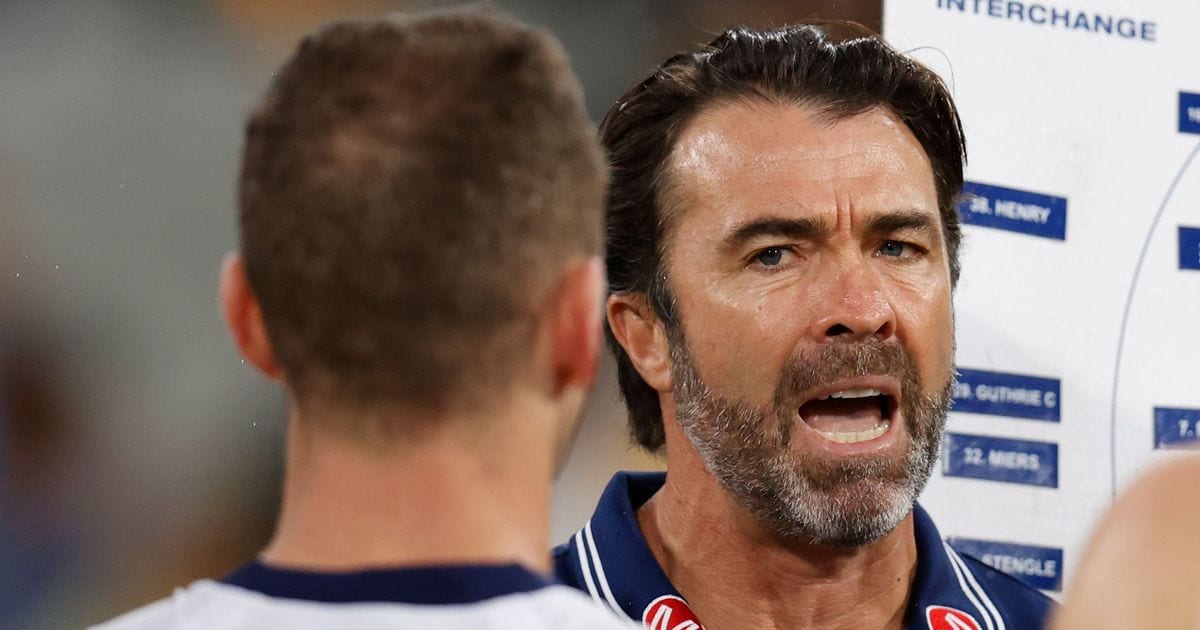 THE UMPIRE dissent rule is in the spotlight again following a controversial incident in the Easter Monday thriller at the MCG that resulted in a contentious 50 metre penalty against Hawthorn.

Hawthorn star James Sicily admitted post-game he was unclear on what reaction is permitted after his teammates Tom Mitchell and Jack Gunston were penalised for reacting to a replay of the dubious free kick paid to Geelong key forward Tom Hawkins in a marking contest, which resulted in a 50m penalty and a crucial goal.

But Geelong coach Chris Scott said his players are fully aware of the crackdown against umpire dissent and know the ramifications of any gestures will result in 50m penalties, even though it will be difficult to remove completely  due to the nature of tight games.

“We understand it clearly. It’s been communicated over a long period of time really clearly and we understand it. Does that mean we won’t transgress? I suspect we will because it’s a highly emotional game,” Scott said in his post-match press conference.

“To give you a window into what we’re doing in the box, we had no idea what that one was for, had no desire to look at the replay it just is what it is, let’s get on with it.

“I will make a mistake in this area at some point. I just don’t want to have an opinion on that stuff; I just want to understand it as well as possible. It’s incumbent on us to say to the player: this is how the game is being interpreted, your opinion does not matter, my opinion does not matter, let’s just be as good as possible at understanding it.”

Hawthorn coach Sam Mitchell chose not to comment on the contentious moment that has drawn widespread criticism and could cause some coaches to seek clarification from the AFL this week.

“I’m not going to ever get involved in any umpire or rule discussions at this point. I’m only five games into my coaching, I’ll wait a little bit longer until I start getting involved. I didn’t know it was a talking point to be fair,” Mitchell told reporters after the 12-point win.

“The one thing I know about umpires is they make way less mistakes than we do, so I’ll worry about the mistakes that we’re making. We didn’t mention umpires at all for the game in the coaches box.”

Mitchell won some classic encounters against Geelong during his decorated career as a Hawthorn player – including the 2008 Grand Final – but his first win against the Hawks’ old rivals was extra sweet for the new senior coach.

Eight days after being smashed by 68 points at the hands of St Kilda, Hawthorn dug in to hold off a Cats side who threatened to run over the top of them late, banking a gusty 12-point win at the MCG in the best performance yet under Mitchell.

Hawthorn is now 3-2 after five rounds – level with Geelong inside the top eight – exceeding expectations so far under the man who won a Brownlow Medal and four flags in the brown and gold.

“There is a part of me that says it’s four points, every win is the same, but Easter Monday is a big day for our club. We’ve had a great rivalry with them over the journey. Right now it feels a little bit sweeter,” Mitchell said.

“We’re going to continue to have good battles against them; they’re going to be a good side for a long time as they’ve proven.

“We know we’re on a journey. Last week very disappointed with lots of parts of the game. This week to play much more consistently. I think the way we ran out the game was pleasing. I think there is a level of belief that comes from playing against a good side and being in those situations.”

Hawthorn was forced to think laterally at quarter-time when young ruckman Ned Reeves was substituted out of the game after dislocating his shoulder. They turned to key forward Jacob Koschitzke, who was playing his first game in the senior side for 2022, and Irishman Conor Nash, who were well beaten in the air but not around the stoppages.

The Hawks are unclear on the severity of Reeves’ shoulder injury right now, but with captain Ben McEvoy sidelined for the next couple of months and potentially longer due to a neck injury, off-season recruit Max Lynch could be the only recognised ruckman available.

Lynch has endured a nightmare month at Waverley Park, lasting less than a half against North Melbourne in round one before suffering a concussion. Just when he was about to pass concussion protocols, the former Magpie entered health and safety protocols, delaying his return further, before Mitchell revealed more issues over the weekend.

“He’s had a wretched run, poor old Maxy. He had his concussion and then he was a COVID case and all that type of stuff. Yesterday he got stung by a bee and had an anaphylactic situation, so he was unavailable even today.

“He has been here and he will certainly come into consideration, but he hasn’t played footy for a month now. We’re not against doing something unorthodox in the ruck. He was an emergency once Chad was unavailable just in case Ned had of got sick. It was an outside chance that we were going to play him, but he wasn’t closely considered.

Scott revealed Brownlow Medal winner Patrick Dangerfield has been carrying niggles across the first part of the season, forcing the veteran midfielder to spend more time in attack to start the season, after he finished with 17 disposals and a goal.

Cats defender Jack Henry was substituted out of the game in the last quarter after hurting the same foot that he had surgery on at the start of the year and Jed Bews hurt his shoulder and couldn’t finish the game.