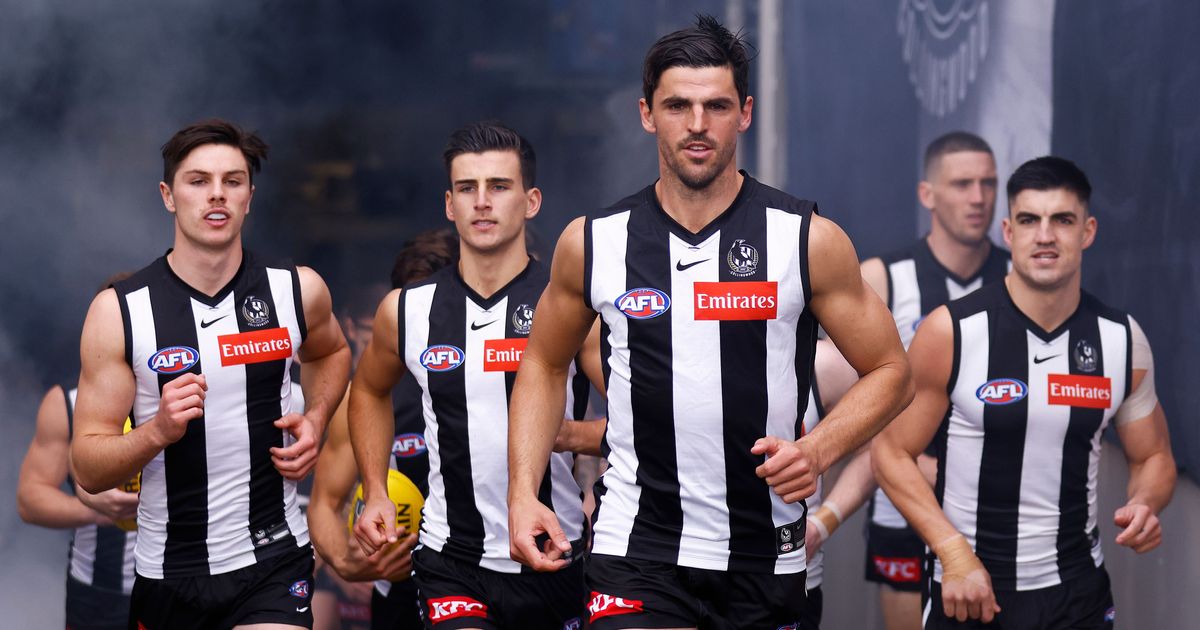 SCOTT Pendlebury has achieved almost everything the game has to offer.

A premiership, half a dozen All-Australian selections, a handful of best and fairest awards and a Norm Smith Medal.

But on Saturday afternoon, the 34-year-old who is clearly in the conversation for best Collingwood player of all time, will become only the 20th player in AFL/VFL history to play 350 games.

Pendlebury already has one of the best CVs of the modern era, but he might have a bit more left in the tank yet.

He is contracted for 2023 and is showing no signs of slowing down. 400 might not be beyond his reach.

Ahead of game No.350, AFL.com.au has made a timeline of his career from the moment Collingwood read out his name in November 2005.

It all started when Collingwood made the somewhat speculative selection on the basketballer-turned-footballer from Sale. After taking Dale Thomas with pick No.2, Magpies recruiting manager Derek Hine made one of the most famous picks of his career, selecting the Gippsland Power midfielder at No.5. Marc Murphy went at pick No.1 and finished his career with 300 games, while West Coast key forward Josh Kennedy is still going around after being taken by the Blues the pick before Pendlebury.

After overcoming the glandular fever that derailed his first pre-season at the club, Pendlebury was picked to make his debut against Brisbane at the MCG in round 10. He kicked his first goal with his first kick after Nathan Buckley lasered a ball to him inside 50 at the Punt Road end of the ground. Buckley kicked six that night, while Pendlebury would finish with 11 touches and add eight more appearances to his first season.

Game No.30 at AFL level also marked final No.1 for Pendlebury, who had moved from guernsey No.16 to No.10 after Blake Caracella retired. The Magpies beat Sydney by six goals at the MCG in an elimination final and would eventually fall agonisingly short of a Grand Final berth when they lost to Geelong by five points a fortnight later. Pendlebury would finish the season as the AFL Coaches’ Association best first-year player after playing 23 games in a year that showed what was to come.

Pendlebury would become an Anzac Day legend in years to come, but round 6 2008 marked his first 30 disposal when he amassed 33 touches in front of 88,999 people at the MCG. He is now one of only four players in AFL/VFL history to record more than 9000 disposals, averaging a remarkable 26.1 per game. He holds the record for most handballs at 4562.

This was a famous year for Collingwood. After living out the final drawn Grand Final, Pendlebury and the Magpies prevailed against St Kilda seven days later to finish an unforgettable finals series for the club. after being troubled by a mystery illness that saw him lose six kilograms before the first Grand Final, Pendlebury returned with a bang the following Saturday to win the Norm Smith Medal after collecting 29 disposals and 11 tackles in the Magpies first flag since 1990. He also won the first of three Anzac Day Medals earlier that season, winning the best on ground the following year and in 2019.

Pendlebury has become a permanent fixture on Copeland Trophy night. Not only has he won the best and fairest five times, but he has also finished on the podium on eight other occasions. To highlight his remarkable consistency. 2011 marked the first in a six-year span that saw him take home five. It was also the year he polled the most Brownlow Medal votes of his career, finishing with 24 to finish equal fourth alongside Western Bulldogs great Matthew Boyd, behind teammate Dane Swan.

It has never been all about the numbers with Pendlebury. He doesn’t need as much ball as others to inflict damage. But in round 16, 2013, Pendlebury amassed a career-high 42 disposals – the only time he has had 40+ – against Adelaide at the MCG to go with two goals. When it comes to stats, he has also laid the second-most tackles in AFL/VFL history behind his long-time rival Joel Selwood.

At the age of 25, Pendlebury takes over from Nick Maxwell as captain of one of the famous sporting clubs in the country. No one could have known he would still be at the helm in 2022, on the cusp of being just the seventh player in AFL/VFL history to captain 200 games – he will do that next weekend against Essendon.

Much like Copeland Trophy night, Pendlebury has featured prominently at the All-Australian awards. He earned his first blazer in 2011 and his most recent in 2019, collecting six across his decorated career.

It might not have been the stage or the setting that the occasion deserved due to the pandemic and Melbourne’s lockdown, but in round 18, 2020, Pendlebury overtook Collingwood icon Tony Shaw to break Collingwood’s games record with game No.314. He also surpassed Nathan Buckley for most games in charge of Collingwood that night. Two years on down the round, Pendlebury is still going and has plenty more in the tank.