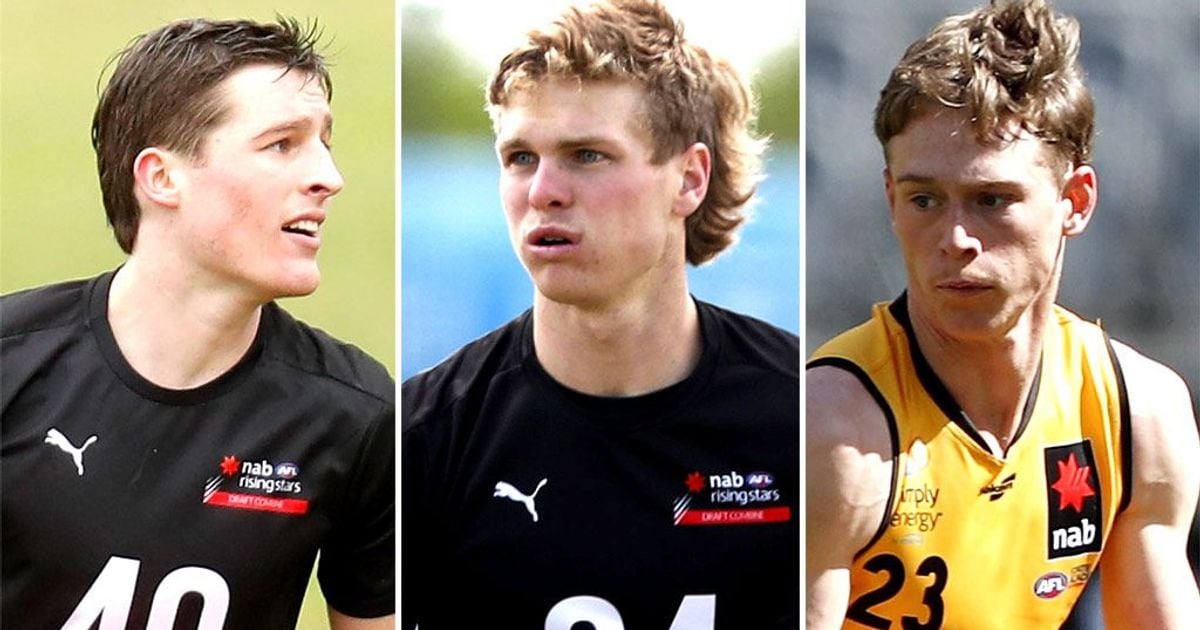 ATTENTION is squarely on Hawthorn and Fremantle’s selections at Wednesday night’s NAB AFL Draft as a run of picks is set to shape the first round of choices, with Vic Country midfielder Ben Hobbs at the centre of the intrigue.

Hobbs’ draft range looks likely to stretch anywhere from pick No.7 through to 14 as clubs navigate their way through a maze of tight calls and 50-50 decisions on prospects.

The first six picks look almost assured saving for a late curveball, with North Melbourne locked in to pick Jason Horne-Francis with the Roos’ first ever No.1 pick.

Greater Western Sydney is expected to bid at pick No.2 on Western Bulldogs prospect Sam Darcy and then take midfielder Finn Callaghan, before Gold Coast is tipped to place a bid on Collingwood father-son gun Nick Daicos.

Mac Andrew is expected to then edge out Josh Gibcus for the Suns at pick No.5, with electric small forward Josh Rachele the hot favourite to be Adelaide’s pick No.6 ahead of Josh Sinn and Hobbs.

>>SCROLL DOWN FOR UPDATED TOP 30

But the Hawks’ choice at No.7 looms as the start of a set of selections that will have big implications thereafter, with Hawthorn considering midfield trio Josh Ward, Hobbs and Matthew Johnson for the prized selection.

Should the Hawks take Ward, the Dockers look likely to grab key forward Jye Amiss, but Fremantle could also be forced to consider its drafting strategy mindful of who the Tigers are interested in with their pick wedged between their pair of selections.

If the Tigers take Gibcus, the Dockers may edge towards local Neil Erasmus, with Johnson also in their considerations. It could follow with Nasiah Wanganeen-Milera nudging out Josh Goater at the Saints, the Eagles grabbing Hobbs over Johnson, and the Bombers left with Johnson at pick 11.

Under another scenario of the Tigers taking Hobbs and the Dockers following with Erasmus, St Kilda could grab Gibcus and leave Wanganeen-Milera to get to West Coast, with the Eagles also considering Campbell Chesser. Essendon could then swoop on Johnson with their selection, with Port Adelaide also looking at Erasmus, Johnson and Josh Sinn (as well as Hobbs in the chance he got that far).

The Hawks’ decision with their pick will have a significant ripple effect, particularly if they side with Johnson, the 192cm midfielder with pace and skills. That could see the Tigers snare Ward, the Saints have a choice between Gibcus and Wanganeen and West Coast possibly with the pick of midfield pair Hobbs and Erasmus.

The block of seven picks between picks 7 and 13 is expected to include Hobbs, Amiss, Ward, Gibcus, Erasmus, Wanganeen-Milera and Johnson (with Chesser at the Eagles the wildcard), with variations of the order of the selections.

Essendon has also been interested in tall wingman Blake Howes, with Chesser and Goater looming as the main contenders to come into that group. None of this trio are among the 14 players attending the draft events spread out around the country.

Zac Taylor looms as a top-20 smokey and has been linked to the Swans, while in the second round Hawthorn has shown late interest in West Australian swingman Rhett Bazzo and the Cats could look at Victorian midfielder Connor MacDonald.