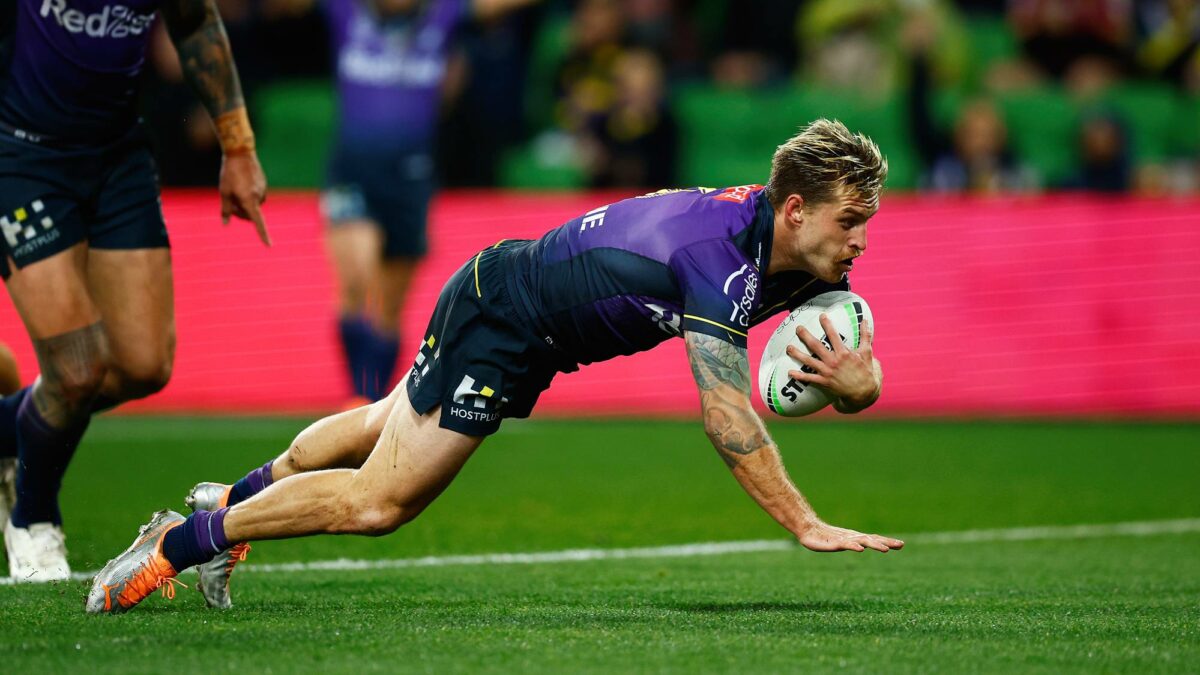 Melbourne’s botched negotiations with Cameron Munster have the potential to not only stuff up their finals hopes but cost them arguably the best player in the game.

The Storm are facing a salary cap squeeze which means they have not been able to go near Munster’s asking price. Why don’t they have the funds? Because they’ve clearly spent too much on other players.

Munster is in the conversation for the title of best player in the NRL alongside Nathan Cleary and James Tedesco and the Storm should have set aside the requisite funds to extend his deal beyond the end of next year.

If that meant not signing Xavier Coates or re-signing Jahrome Hughes, Harry Grant or Ryan Papenhuzen, then so be it. They are all very good players, Munster is a great one and at 27, still has the potential to become even better.

When Cameron Smith, Billy Slater and Cooper Cronk were all at a similar age, the Storm found a way to keep them all … Hang on, don’t go down that path again, Melbourne. Play it by the books this time, not by two sets of books.

Munster’s agent Braith Anasta indicated on NRL 360 on Wednesday night that although his client would stay for a slightly lower offer than rivals, the Storm were not in a position to match the vast sums that will come in from rival clubs and he would test the market on November 1.

“As it stands right now it looks most likely at this point that we will go to the market in November. But things could change between now and then,” he said. “I think ideally Cameron and myself would like them to move more on the salary cap than where they are at right now.

“It doesn’t mean that he won’t sign before then because he loves the club. He may sign after November.”

His market value is only going to go up at a rapid rate when deadline day comes and it’d be a surprise if he hasn’t inked a deal for seven figures per season a few days later, whether that’s with Wayne Bennett at the Dolphins or a bunch of the other clubs that would move heaven and earth to get him.

Whichever way you look at it, the Storm have snookered themselves because it’s unlikely he will stay and they will only have themselves to blame.

Here are the burning questions for all 16 teams for Round 23.

Are Rabbitohs real deal? Latrell Mitchell’s wonky left boot on a Saturday night in July at Shark Park could prove the difference between another trip to the Grand Final and playoff heartache. Mitchell had three golden chances to ice the Round 20 game against Cronulla but his field goals went astray before Nicho Hynes stepped up to for a 21-20 extra-time triumph.

If the Bunnies had won that match, they would be in the top four with three rounds remaining on a seven-game winning streak. Despite last week’s 26-0 shellacking of Parramatta, they are fifth heading into back-to-back-to-back showdowns with a trio of legitimate title contenders in Penrith, North Queensland and the Roosters.

They can still make the top four but the odds are against them. If they lose two or three, they’re not guaranteed of even making the finals with ninth-placed Canberra facing three also-rans to finish the regular season. The Rabbitohs can silence any lingering doubt about their title claims if they can add the wounded Panthers to their list of scalps in Thursday night’s blockbuster at Accor Stadium to kick off the penultimate, penultimate round.

Is Viliame Kikau the undisputed best second-rower in the NRL? It may seem odd to raise this question about a two-time Dally M Second-rower of the Year but he’s always been highly rated even though he hasn’t always delivered to that elite status. This year, however, he seems to be involved at a greater rate and more influential on Penrith’s fortunes. They will miss him more than they realise next year when he goes to Canterbury.

Why is Hammer the odd man out? Whenever the Cowboys have had their top six outside backs available this season, Hamiso Tabuai-Fidow has been relegated to the bench utility role. Scott Drinkwater deserves to keep the fullback jersey, Kyle Feldt and Murray Taulagi have been effective on the wings and Valentine Holmes has shone since switching to left centre but the Hammer would probably be a better long-term investment as the other centre ahead of veteran Peta Hiku.

Do Warriors have any petrol left in the tank? There could be some big scores put on the Warriors over the next fortnight when they’re away to the Cowboys and Panthers before setting themselves to finish the season with a bang when they return to Auckland permanently in the final round to face Gold Coast. After three years on the road, player exits and coaches swinging through the revolving door, you can hardly blame them if they don’t give the two top teams much of a challenge.

Are Broncos satisfied with their improvement already? They’ve gone off the boil over the past few weeks with losses to the Tigers and Roosters and a relatively unconvincing 28-10 win over the woeful Knights last week. They’ve done well to rise to sixth after wooden spoon and 14th-placed campaigns the past two years but will be making up the numbers in the playoffs unless they start with a strong performance against the Storm.

Has Josh King been bargain buy of the year? He was as anonymous as an NRL player can be for six seasons at Newcastle and although he doesn’t get many headlines at Melbourne, he’s been a valuable addition for Craig Bellamy’s team in their effort to replace Dale Finucane as the pack’s designated workaholic. He will play his 100th NRL game on Friday.

Where has Eels motivation gone? They couldn’t have been more lethargic if they tried, or didn’t try, last week against Souths. In a big match with finals seeding on the line, Parramatta truly was its Indigenous translation of “the place where the Eels lie down”.

How stark has Bulldogs’ attacking turnaround been? Well, in statistical number-like form, it’s gone from 9.6 per match in 10 times with Trent Barrett at the helm to 26.3 under Mick Potter in 11 outings. And it’s not like it’s been at the expense of their defensive capabilities – they conceded 22.1 per game before the coaching change and have since allowed a slightly higher 25.1, a number which rose unexpectedly last week when they copped a 42-18 hiding from the Warriors in Auckland.

Talk of Dessie’s demise is surely premature? Even though there was a finals performance clause for this season in Des Hasler’s contract to trigger an extension in 2024, that doesn’t mean he won’t be there next year. He sometimes escapes criticisms from friendly sections of the media but this time around he has a rather justifiable excuse of the reigning Dally M Medallist, Tom Trbojevic, played just seven matches this season. If he’s fit next year and the Sea Eagles again can’t compete with the big dogs, that’s when Hasler should be nervous.

Can Sharks make up for Toby Rudolf’s go-forward? The big prop, who is out until the first week of the finals after suffering an MCL tear against Wests Tigers in Tamworth last Saturday, is the only Sharks forward averaging more than 100 metres per game. They have a lot of workers but not a lot of metre-eaters in their pack – his absence could damage their chances of a top-two finish ahead of the Cowboys.

Are Roosters able to keep up this attacking turnaround? They’ve made 34 line breaks in their five-game winning streak, at a tick under seven per match. In their previous 16 outings they’d made 75 at an average of 4.7. They should lift that recent average even higher against the Wests Tigers on Saturday night before sterner tests await from Melbourne and Souths.

Should Tigers rest easy now that Isaiah Papali’i says he’s coming? In a word, no. The Eels forward had several chances to publicly put to bed any suggestion he didn’t want to fulfil his three-year contract and didn’t. His manager has told the Tigers he will report for pre-season training when required, likely after the World Cup, but this has got Tyrone Peachey to the Titans deja vu written all over it and even though he saw out his deal, the Gold Coast hardly got value for money from that unhappy recruit.

Who has improved at Dragons this year? The talk out of the club is that Tyrell Sloan and Jayden Sullivan were barely sighted at NRL level this season because they’re not ready for the demands of the top grade. If that’s the case, that’s their call. But whose stock has improved at St George Illawarra this season – fellow young gun Junior Amone has certainly improved after getting an extended run and was their best player in Sunday’s loss to Canberra, Ben Hunt’s had a career-best season and Cody Ramsey has enhanced his reputation by making a decent fist of it at fullback. It’s hard to make a case for anyone else of note at the Dragons who has improved significantly in 2022.

Has Holbrook done enough to survive as Titans coach? For the time being at least he has. With Sam Verrills and Kieran Foran bolstering their spine next year, he will have no such excuses if they again struggle but he should at least be given the chance to make amends in 2023.

Why did the Knights make Kalyn Ponga captain? Toilet escapades aside, he’s never shown true leadership qualities. A seasoned veteran like Tyson Frizell, who is also not necessarily a big talker, would have been a better option to lead from the front. Ponga seems too blase for Newcastle fans to stomach as skipper when they’ve been used to passionate, hard-working captains over the years, going back to the early days of Sam Stewart and Paul Harragon, through the Andrew Johns era, Danny Buderus and Kurt Gidley.

Are Raiders anyone’s second-favourite team anymore? The Ricky Stuart “weak-gutted dog” debacle has left a sour taste in the mouth of all fans who used to like seeing Canberra beat anyone apart from their own team. The Viking Clap vibes of the 2019 run to the Grand Final have evaporated faster than you can say insincere apology.