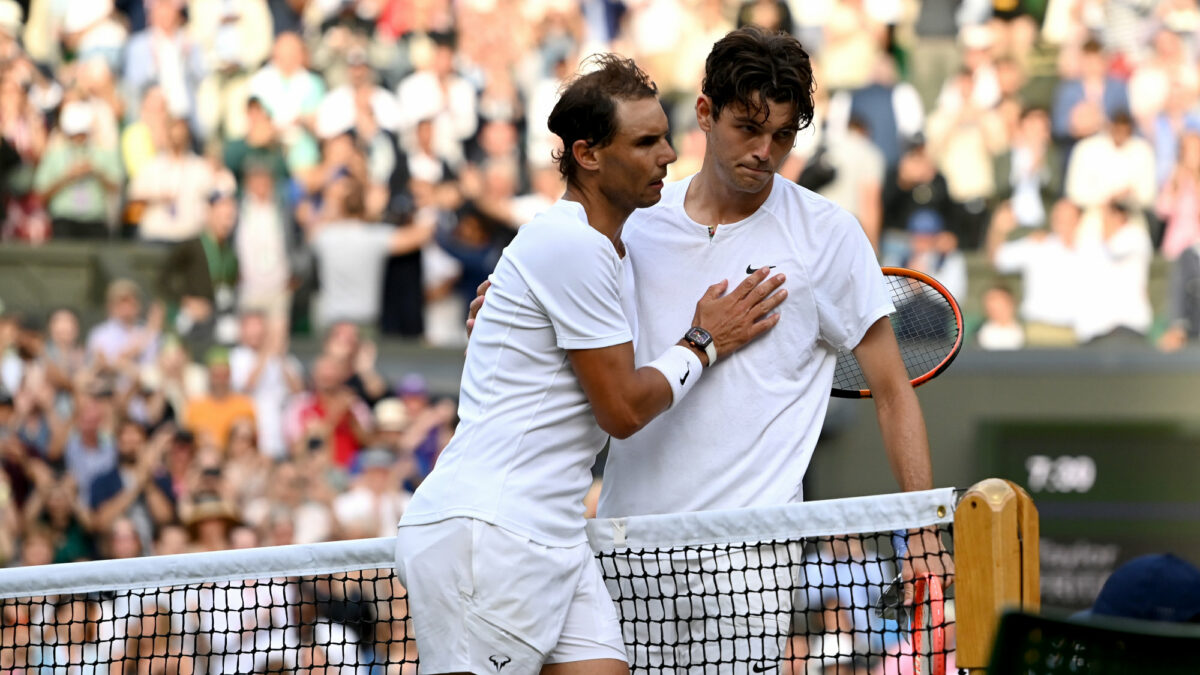 Rafael Nadal’s withdrawal from his Wimbledon semi-final against Nick Kyrgios shouldn’t provide the Australian with a ‘walkover’ into the final.

Instead, the man Nadal bested in a thrilling five-set quarter-final, Taylor Fritz, should be permitted to take the Spaniard’s place in the last four.

Changing the laws of tennis to accommodate this is far from ideal, but it is quite comfortably the lesser of two evils, given the numerous disadvantages to both players and fans caused by the loss of a blockbuster semi-final.

The only winner out of this whole situation is Kyrgios. The fans, many of whom paid hundreds if not thousands of pounds for the opportunity to see the match on Centre Court, are robbed of a match they are entitled to see (yes, they can have their tickets refunded, but what of travelling expenses or just simply the privilege of watching a thrilling match?); the tournament itself loses a major drawcard, Nadal and Fritz find themselves out of the tournament, and the two semi-finalists on the other side, Novak Djokovic and Cam Norrie, must now face an opponent refreshed from a three-day break in the final.

Because of the rules currently in place – instant elimination for any loser in the main draw – Kyrgios is now the sole beneficiary of something that he had absolutely nothing to do with. Through sheer dumb luck, he now has a golden opportunity to challenge Djokovic or Norrie in the final, without needing to fight through a brutal semi-final against tennis’ greatest fighter.

The only one who has any right to be advantaged by this is Fritz. Either Nadal was carrying an injury into the match, meaning he should have either retired during it or withdrawn prior; or, more likely, Fritz caused the champion to over-exert himself and get injured, and his withdrawal was down to the American.

There would be no doubts about Fritz’s progression into the last four had Nadal chosen to retire mid-match, which he surely would have down had he known the severity of the injury would force him to withdraw anyway.

Tennis already has this in place for qualifiers: anyone in the main draw who pulls out of a tournament between the draw becoming official and the start of their first-round match is replaced by a ‘lucky loser’: a high-ranked player who lost in the final round of qualifying.

Rafael Nadal consoles Taylor Fritz after defeating him in the quarter-finals at Wimbledon. (Photo by Stringer/Anadolu Agency via Getty Images)

At this Wimbledon, five lucky losers made it to the main draw in this way: the most notable saw seeded players Matteo Berrettini and Marin Cilic withdraw after testing positive to COVID-19. In the Australian Open earlier this year, Novak Djokovic was also replaced in this way when his visa was revoked before the start of the tournament but after his name had been placed in the draw.

If instant lucky passage into the next round isn’t acceptable for the first round, why should it be at any other point in the tournament?

It’s not as if this change would create any seismic ripples, either: only one of the five lucky losers at Wimbledon this year progressed past the first round. This is also the first walkover this late in a men’s grand slam tournament since Richard Krajicek at the 1992 Australian Open.

The only comparable case in recent memory is Roger Federer’s withdrawal from the 2014 ATP World Tour Finals final, gifting Djokovic the title without lifting a finger. It was a farce then, and it’s a farce now.

Imagine if this had been one round later; if Nadal had bested Fritz in a semi-final, then withdrawn before the final and allowed Djokovic (or Norrie) to claim the title without a final being played. There would be outrage – not least from the fans who paid exorbitant sums to see it live, and the broadcasters who forked out even more to cover it – and tennis would surely be embarrassed into making this change.

Nadal’s withdrawal has instantly seen this become a focal point of discussion, with many prominent tennis figures giving the ‘lucky loser’ idea support.

“What does #Wimbledon gain with Nadal winning his QF and not being able to play the semi? Nothing,” Tweeted commentator Nick McCarvel.

“In fact the sport loses one of its marquee matches of the year.”

Does it have drawbacks? Absolutely. It would be problematic to see Fritz, a player unable to best a clearly injured Nadal, make the most of his second chance by even beating Kyrgios and making it to the final, let alone winning that too.

It’s an obvious integrity issue – at least the lucky losers in the first round are rarely good enough to make it far in that tournament, otherwise they wouldn’t have needed to go through qualifying.

“And it’s sufficiently rare that it seems like a solution without a meaningful problem,” Willis added.

Even more concerningly, Sports Illustrated’s Jon Wertheim noted the threat of ‘a real temptation for corruption/arbitrage’ makes such a ploy risky. He’s not wrong: especially at lower-level tournaments, players could easily be tempted to pull out of a match claiming injury and pocket rewards. Plus, had Nadal opted to play on, but retired in the second set, wouldn’t that be just as farcical a situation?

Perhaps most importantly of all, Fritz himself is against it. “Nah not looking for handouts. If I couldn’t beat him (Nadal) then I don’t deserve to be in the semis … simple as that,” he wrote in response to a fan on Instagram.

Few tennis players would be comfortable with such a progression a round further into a tournament, let alone the most prestigious one of all. Fritz would have already spent 24 hours grappling with the heartbreak of defeat, and his own disappointment in failing to win of his own accord: no doubt it would cheapen the achievement to win Wimbledon in such a way.

In saying that, if the rule was brought in, there is surely no way in Hades Fritz, or Roddick, or any tennis player, would turn it down.

All these are excellent and compelling points, but superseding all of them is this: sport, when you get down to brass tax, is entertainment. It’s for the fans. None of it exists without a willing conglomerate of ordinary, workaday people, putting in their time and their money to watch and cheer the best athletes in the world going about their business.

Yes, it would need thorough checks and balances. Yes, it would cause problems to be addressed in due course. And yes, it would fundamentally change tennis.

But at the end of the day, it means tennis supporters don’t have to risk a keenly awaited match being cancelled without some form of recompense from the sport. And that’s not nothing – in fact, it’s everything.