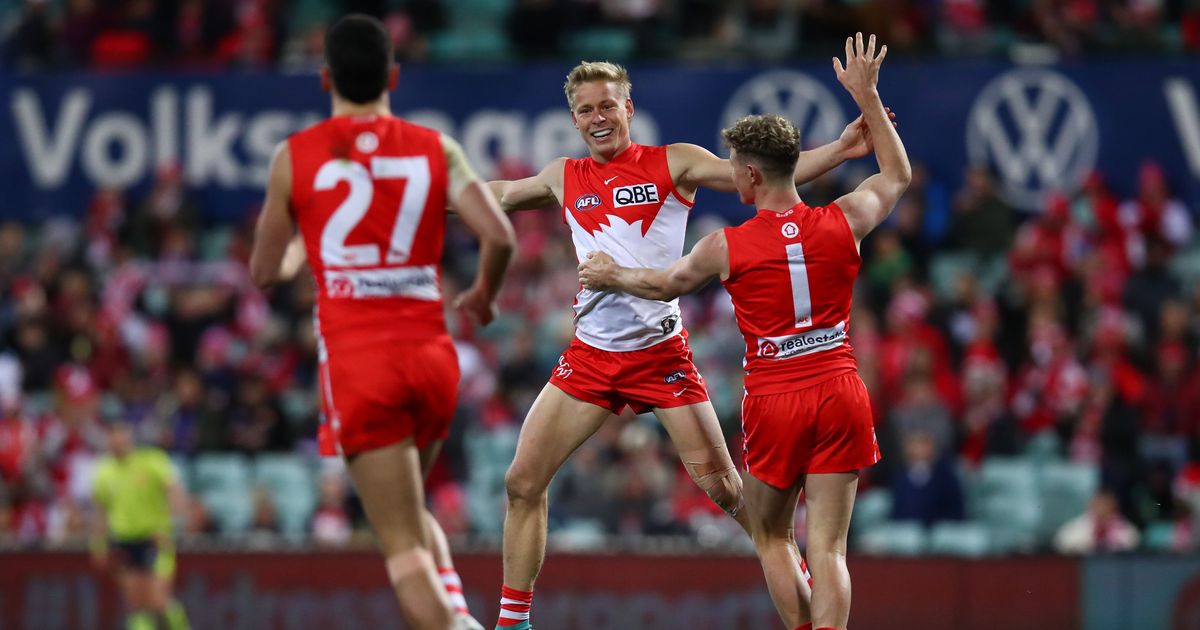 IN THE handbook for ‘How to respond to a shock loss’, surely a seven-goal first quarter smashing is the dream result. Sydney, therein, might have spent the week reading.

The Swans savaged the Western Bulldogs in a dominant opening term on Friday night at the SCG and ran out 53-point winners to strike back from last week’s defeat to an out-of-form Essendon.

It began from the very start, as the Swans recorded their best first quarter since 2018. And this time, unlike against the Bombers, they went on with their early lead to win 17.18 (120) to 9.13 (67) and go a long way to sinking the reigning Grand Finalists’ finals hopes.

Tom Papley was exceptional, collecting a lively 24 disposals, booting 2.5 and putting in an electric display, while Isaac Heeney kicked four goals as the Swans’ high-pressure performance shut down and slowed the Bulldogs, who are in a serious fight to make the top eight.

The Swans kicked five goals before the Dogs got their first, but they just kept motoring on, finishing the term by registering 15 scoring shots and their highest first-quarter score since round 12, 2018.

When Dylan Stephens strolled in for the Swans’ first goal of the second term to take the lead to 43 points, Sydney had complete dominance of the game.

The Bulldogs’ response was better for the remainder of the second term, kicking the next three goals to cut the deficit back to 23 points before a late goal to Callum Mills kept the Swans in control.

Having weathered the better Dogs’ effort in the second term, the Swans ripped the game apart in the third term. Heeney was again integral, kicking two goals for the quarter, as Franklin also became more involved despite his inaccuracy around goal.

Papley, too, overcame his inefficiency in the first half to kick two third-quarter goals and lay his claims on best-afield honours, with the Swans extending their lead to 49 points by the last change, with the margin hovering around the same mark for the final term as the Swans sauntered to victory.

A night of everything for Papley
He has become renowned for his goalkicking exploits, but Tom Papley had a terrific night against the Bulldogs without kicking a goal. The small forward played plenty of midfield time and gathered 24 disposals. But he had his chances in attack, too, kicking four behinds before booting two goals in the third term. His busy night didn’t stop there – he was also placed on report for front on contact on Josh Dunkley in an incident that will be looked at by the Match Review Officer but is very unlikely to attract any time on the sidelines, and later in the third term hurt his right shoulder after landing heavily after a mark before playing out the game.

Warner’s ascent to stardom continues
We saw plenty to like last year from Chad Warner as a young Swan but this year has been more of a coming of age campaign from the powerful midfielder. Sydney has had plenty of highly rated early-picked players come through the draft in recent years but Warner, back at pick No.39 in 2019, might be one of the best of them all. Warner was huge on Friday night, dominating against a star-studded Bulldogs midfield unit. He picked up 25 disposals, 11 inside 50s and kicked a goal, and also had clearly the most metres gained of any player (667).

Amartey party back in action
Joel Amartey had played just two games for the Swans this season since his exciting period of form last year, his breakout campaign in red and white. And he got involved early against the Dogs, booting two goals in his side’s blistering opening term. Both were impressive – he took one mark on the lead and then another in a big contested situation. Both were coolly converted, too. Amartey’s value was also significant for the Swans in being able to pinch-hit in the ruck to help Sam Reid after Peter Ladhams’ thumb injury.