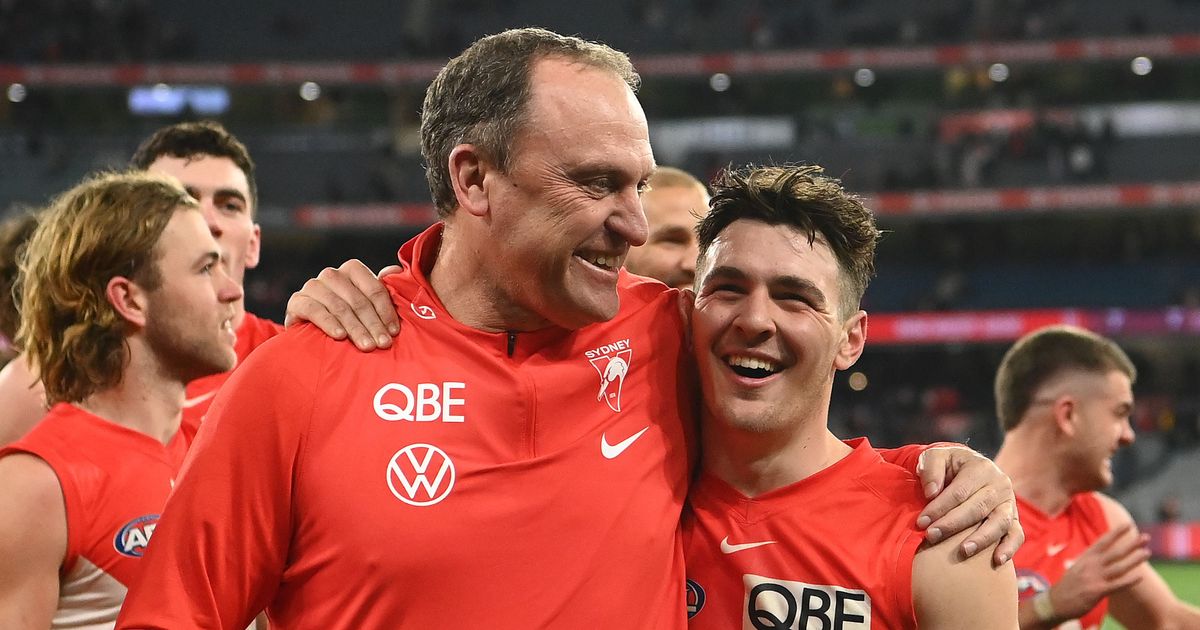 SYDNEY is into a preliminary final for the first time since 2016 and Swans coach John Longmire says his side showed its evenness in its qualifying final victory over Melbourne.

The Swans came back from 15 points down in the second quarter and again from behind in the third term to steamroll the reigning premiers, kicking six goals in the third term and keeping the Demons goalless in the last quarter to win by 22 points.

It sees the Swans secure a home preliminary final for the first time since 2014, when they made the Grand Final but lost to Hawthorn and puts them in the box seat to reach this year’s premiership decider.

And they beat Melbourne at the MCG with some of their star players quiet, with Lance Franklin (seven disposals, no goals), Isaac Heeney (one goal) and Chad Warner (13 disposals) all subdued by their high standards. Longmire said it proved that the Swans group had the spread required to reach the top.

ANALYSIS He barely had a touch, but Buddy still turned the game on its head

“We think we’ve got some good players, but it’s just not about that. It’s about being even and everyone contributing and making sure we all know what our role is. I know it’s a cliché but it’s real one and it’s everyone working together and understanding what works for us as a team,” Longmire said post-game.

“If you’re not having a great night, [it’s] still getting stuff done that we need to get done. It was an even performance and everyone contributed, even the blokes who didn’t have great nights. It’s about the system over the course of four quarters and keep working at what we know works.”

Franklin, whose future is uncertain at the end of the year as he contemplates retirement, was blanketed by gun Melbourne defender Steven May, who collected 23 disposals and had seven marks in a brilliant performance. Longmire said the Swans had tweaked their approach as Melbourne’s dominance in the air impacted the game.

“They were clearly dominant in the air and there were a few things we were talking about during the course of the game. Steven May is a brilliant player and I thought once we got it to ground [for] a bit of ‘dirty ball’, it wasn’t perfect at times, but then we’d get on the hunt,” he said.

“And when we got on the hunt, I thought we were pretty good. Sometimes it’s just about getting the ball forward and getting to work.”

Longmire praised the Swans’ last-quarter intensity – they registered 28 of their 82 tackles in the final term – as an indicator of their relentless approach, and said their rise wasn’t necessarily ahead of schedule from a list demographics viewpoint.

“I’m not sure whether you say what the time is. I was really disappointed we lost last year in the first week. You’ve got to take your moments and – age profile or not – you just have to work out what works for you and players hopefully believe that,” he said.

Ollie Florent limped from the field in the final moments with a foot injury, but the midfielder is expected to be right to play in two weeks with Longmire saying he had avoided injury after his 20-disposal game.

“He sprained his foot but it’s OK. He stood in a hole out there somewhere he said, but he said it’s fine and he could have come back on if needed,” Longmire said. “He’s just going to ice it up.”