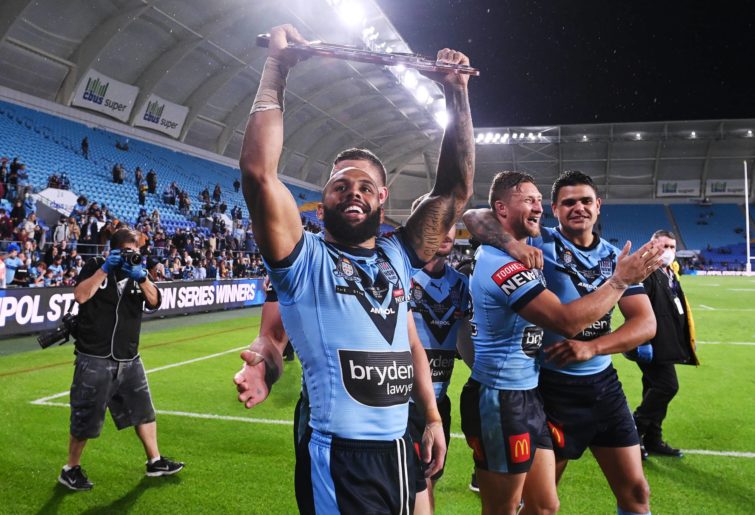 Here’s another silly article to brighten your day: a team of players selected solely on the basis of the points that they have scored for NSW in State of Origin matches (excluding Super League).

The criterion are that the player is only eligible for the position that they predominantly played for NSW, and the eligible player who has scored the most points for NSW in that position makes the team.

Thirty-two points from eight tries in 11 games. He scored a double in his Origin debut.

129 points from 11 tries, 42 goals and a field goal in 19 games. Highest all-time Origin point-scorer for NSW and third overall. He scored 18 points in his Origin debut in 1995.

Eighty-two points from seven tries and 27 goals in eight games. In a surprisingly brief Origin career, his standout performance was in Game 3 of the 2000 series when he scored 22 points from three tries and 10 goals from as many attempts.

Seventy points from two tries and 31 goals in 14 games. He landed 10 goals from 11 attempts in the two games he played in the 2019 series.

Ninety-four points from four tries, 37 goals and four field goals in 23 games. Scored 13 points from a try, four goals from four attempts and a field goal in the first game of both the 2002 and 2003 series.

Eight points from two tries in 10 games. He played in three winning games for NSW and scored a try in two of them.

Eight points from 2 tries in 21 games. Scored his tries in back-to-back games in the 2005 series.

Sixteen points from four tries in 11 games. Scored all of his tries in his first four games for NSW.

Twelve points from three tries in 17 games. Perhaps the only player to be picked in five different positions for NSW.

That’s a handy side, but will they measure up to the Queesnland point-scoring machines?