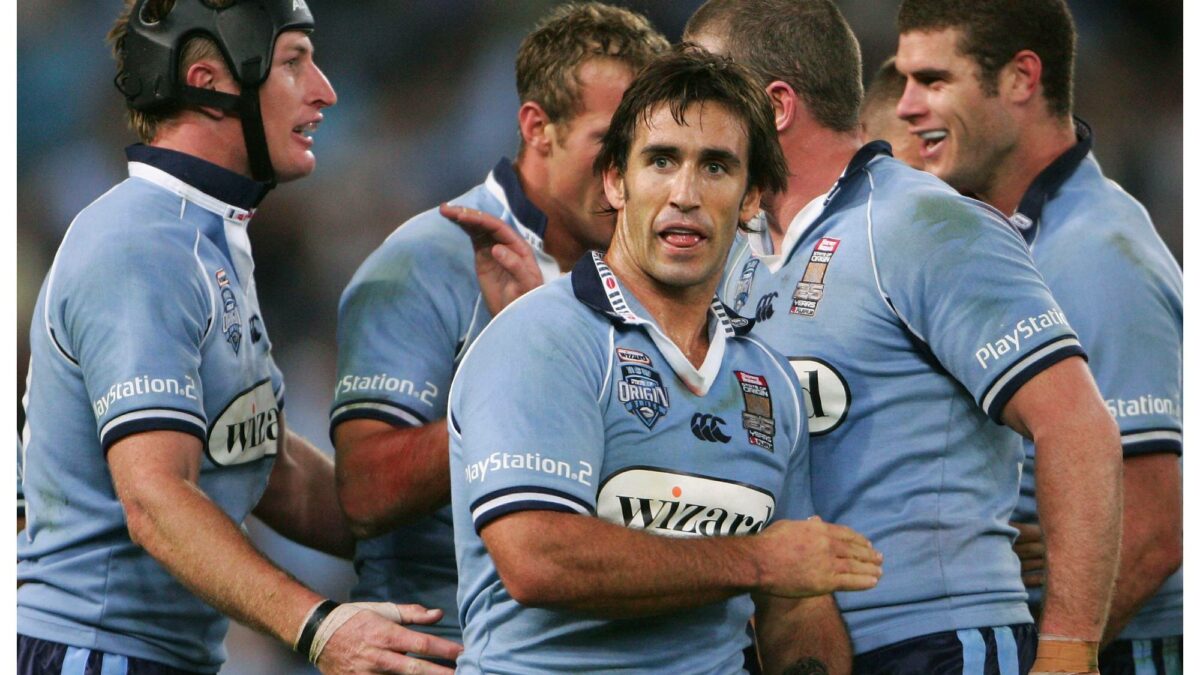 The story of 42 years of State of Origin can be told by the players who have entered rugby league’s most intense arena.

There have been 514 players who can call themselves Origin players in the men’s interstate contests which kicked off in 1980 with 295 wearing the sky-blue of NSW and 219 bleeding maroon for Queensland.

Each state will roll out graduates to league’s toughest finishing school on Wednesday at Accor Stadium with Blues trio Kotoni Staggs, Stephen Crichton and Ryan Matterson making their debut while Selwyn Cobbo, Reuben Cotter, Jeremiah Nanai and Patrick Carrigan will do likewise for the Maroons.

In the spirit of The 60 Players Who Explain The 1990s two-part do-up published last month, it’s time to select those who sum up each of the two states in league’s greatest rivalry.

First of all, it’s the Blues edition with 30 players who are synonymous with NSW over the course of more than four decades with the Maroons to follow suit in a separate article tomorrow.

Here are the Players Who Explain the NSW Blues in Origin

The Fullback: James Tedesco will equal Garry Jack in second place for most Origins for NSW at fullback when he plays his 18th on Wednesday and is on track to equal Tim Brasher’s record of 20 at the end of the series. They were both great fullbacks but Tedesco, who also has the captaincy on his resume, has had a slightly greater impact on the interstate arena during the Blues’ recent run of success.

The Winger: Andrew Ettingshausen is the second most-capped Blue of all-time (27)  behind Brad Fittler (31), he filled in everywhere in the outside backs in an Origin career that spanned 12 years to edge out Jarryd Hayne and Rod Wishart.

The Centre: Laurie Daley was dominant at every level of the game and would have played more than the 23 on his resume if not for a couple of years when Super League players were ineligible. Whenever the Blues had Daley and Fittler in a team, the Maroons didn’t know which way to look.

The Five-Eighth: Brad Fittler was often unfairly criticised for not dominating Origin as much as Wally Lewis did when he wore the Queensland No.6 jersey but his record of 17 wins in 31 matches, starting in 1990 as a teenager through to his 2004 swan song, is undeniable.

The Halfback: Andrew Johns took a while to truly stamp his class on Origin but was so good he was able to play hooker in defence and first receiver in attack. His 2005 game-two performance in his Blues comeback after knee surgery and a broken jaw stands as possibly the greatest individual display in Origin history. Two try assists and two line breaks only tell part of the masterful tale of a dominant display in the 32-22 win that the Knights Immortal describes as “probably the best I’ve played”.

The Lock: Paul Gallen by his own admission tried too hard when he first got a chance at Origin but over a 24-game career became the cornerstone of the NSW pack to lead the Blues to their 2014 drought-breaking series win.

Andrew Johns celebrates a try with teammates during Origin II in 2005. (Photo by Chris McGrath/Getty Images)

The Second-Rower: Steven Menzies played the most Origins among second-rowers with 20 but all but six were off the bench so Nathan Hindmarsh gets the nod here, just ahead of Boyd Cordner. Hindmarsh throughout the 2000s was immense at Origin level, often making more than 50 tackles a game and barging into the defensive line with relentless intensity.

The Prop: Paul Harragon shades Glenn Lazarus here by the barest of margins. NSW went 12-8 with Chief in the side and 11-8 when The Brick With Eyes was propping up their pack. Harragon also demonstrated more passion in the 1990s at a time when Queensland were said to be the ones who cared more about Origin.

The Hooker: Danny Buderus was the perfect accomplice for Andrew Johns after playing so much together at Newcastle but he was also a rock-solid tackler and fine leader, who captained the Blues 15 times even when Johns, his club skipper, was also in the side.

The Mr Fix-It Utility: Brad Mackay started in four positions – centre, five-eighth, lock and second-rower – and also came off the bench in a 17-game career which does not get due credit in the Origin history books but was definitely appreciated by his teammates.

The Captain: Steve Mortimer only led NSW on three occasions but he will forever be remembered for making the Blues care about Origin. The images of him breaking down with emotion at the SCG after conquering Queensland for the first time in 1985 set a standard for all who followed.

The One That Got Away: Greg Inglis, under current eligibility rules, would have been ineligible to represent Queensland as the Macksville prodigy didn’t move north of the border until he was 16, less than three years before he controversially played the first of his 32 matches for the Maroons.

The Guy Who Gave it away Too Early: Peter Sterling played the last of his 13 Origins in 1988 a few days after his 28th birthday. He retired early from rep footy to concentrate on club duties with Parramatta but is still equal-fourth all time for most man of the match awards behind only Wally Lewis (8), Cameron Smith (7) and Johnathan Thurston (5).

The Most Talented: Jarryd Hayne is now a cautionary tale for what can happen when fame comes too quickly but irrespective of how the latter part of his career panned out, his performances at Origin level were the deeds of an extraordinary athlete.

Josh Addo-Carr scores a try at the Melbourne Cricket Ground in 2018. (Photo by Michael Dodge/Getty Images)

The Try-scorer: Josh Addo-Carr’s 10 in 12 games has him just two away from being NSW’s all-time leader with Jarryd Hayne and Michael O’Connor the only Blues ahead of him with 11 apiece. Very unlucky not to be in the team for the 2022 series opener.

The Stat Attack: Ryan Girdler’s 2000 series is likely to never be repeated. After tallying a combined 20 points as NSW won the first two clashes, the Panthers centre had a dream night in the 56-10 game-three massacre, scoring three tries and 10 goals for a record 32 points in the match and a series haul of 52.

The Point-scorer: Michael O’Connor’s tally of 129 in 19 games is impressive enough but how about scoring all 18 points on debut in the first match of 1985. He will forever be remembered in the Origin arena for his sideline conversion in ‘91 to win the second match and keep the series alive. Unfortunately for him, he missed all four kicks at goal in the third game, which the Blues lost by two, and he never represented NSW again.

The Guy Who Never Found His Niche: It’s almost incomprehensible that Greg Alexander only played six Origins despite being one of the best players for more than a decade in the late 1980s and early 1990s. He was only given two games at halfback, a couple out of position at fullback and two more off the bench.

The Best Defender: Craig Fitzgibbon was not the biggest hitter but there was no one more reliable who ever showed up the NSW defensive line. He was invariably the first tackler rushing into action from kick-off and every minute thereafter in his 11 Origins from 2003-08.

The Players’ Player: Bradley Clyde is another who would have had a lengthier Origin career if not for the Super League madness but if you ever watch a replay of one of those early ‘90s classics, spend a couple of minutes tracking Clyde’s movements and you’ll see why he was the best back-rower in an era jam-packed with all-time greats.

The Accidental Hero: Shaun Timmins got sick of teammates missing field goals and banged over a 38-metre attempt to win Origin’s first golden-point extra time game 9-8 in 2004. He was only in the team at five-eighth after injuries to Andrew Johns, Trent Barrett and Brett Kimmorley.

The import: James Tamou represented the New Zealand Māori less than two years before he was picked for NSW. Born in Palmerston North, he moved to Australia aged 13 and would have been picked for the Kiwis in 2012 but ended up playing in 14 Origins for the Blues.

The bolter: Will Hopoate had celebrated his 19th birthday a month before his Origin debut in 2011 with just 15 NRL games for Manly under his belt. He played the house down, scoring a crucial try in an 18-8 triumph but after missing the series finale due to injury, he did not play Origin again until three years later as he decided to embark on a two-year Mormon mission.

The under-used player: Anthony Mundine was rightly not picked at five-eighth in the late 1990s behind Laurie Daley and Brad Fittler but selectors should have found room for him at centre or on the bench. He finally got a run in ‘99, playing all three matches via the interchange, but after getting snubbed the Kangaroos selectors a few months later, he quit the sport midway through the following year to chase boxing world titles.

The hard-luck story: Steve Ella is one of those players who would thrive in any era. Unfortunately injuries marred his career in the second half of the 1980s and he was never able to consistently translate his dynamic Parramatta displays into the Origin arena.

The late bloomer: John Ferguson was already 30 when he played all three matches of the 2-1 series win in 1985 and the Canberra winger was a few weeks short of his 35th birthday when he lined up for his last Origin in 1989. Unfortunately the team struggled that year and was unable to give him the half-chances that he often converted into four points at club level.

The flash in the pan: Trent Hodkinson only played two series as halfback but his late individual try in 2014 Origin II ensured NSW broke Queensland’s eight-year series win streak. If not for Hodkinson’s try and conversion in that game, the Maroons could have won 12 years straight.

The big-game performer: Greg Bird was a very good player across 235 games in the NRL for the Sharks and Titans but when he entered the Origin arena, he always rose to the occasion, thriving on playing alongside and against the best of the best. He won three man of the match awards in his 18 appearances for NSW but only got to play in one series win during his decade-long tenure from 2007-16.

The What-If Story: Sharks fullback David Peachey made his debut in the first Origin of 2000 and scored the match-winning try late in the game but unfortunately suffered a hamstring injury in the process. Tim Brasher played the final two matches of the series and Peachey never got another run with the likes of Mark Hughes and Brett Hodgson selected ahead of him before Anthony Minichiello made the Blues No.1 jersey his own.

The icon: Tommy Raudonikis was the inaugural captain and he never got over the fact that his great mate Arthur Beetson got one over him in that famous first match in 1980 in what would prove to be the only Origin either of them would play. His two-year stint as coach in the late 1990s, bringing the famous/infamous “cattledog” fight call to the Origin arena, added to the Raudonikis legend of being perhaps the fiercest competitor rugby league’s ever known.