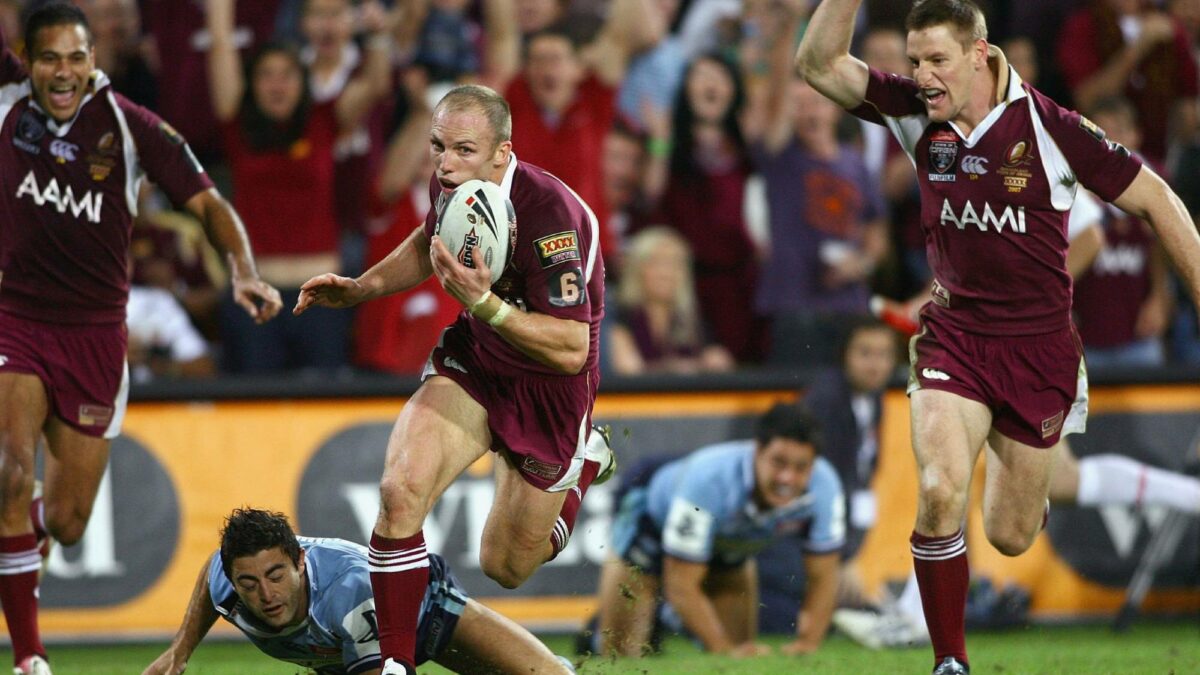 The story of 42 years of State of Origin can be told by the players who have entered rugby league’s most intense arena.

There have been 514 players who can call themselves Origin players in the men’s interstate contests which kicked off in 1980 with 295 wearing the sky-blue of NSW and 219 bleeding maroon for Queensland.

Each state will roll out graduates to league’s toughest finishing school on Wednesday at Accor Stadium with Blues trio Kotoni Staggs, Stephen Crichton and Ryan Matterson making their debut while Selwyn Cobbo, Reuben Cotter, Jeremiah Nanai and Patrick Carrigan will do likewise for the Maroons.

In the spirit of the 60 Players Who Explain The 1990s two-part do-up published last month, it’s time to select those who sum up each of the two states in league’s greatest rivalry.

Part one was published yesterday – the Blues edition. This time it’s the 30 players who are synonymous with Queensland over the course of more than four decades.

Here are the Players Who Explain the NSW Blues in Origin

The Fullback: Gary Belcher, Darren Lockyer (for half of his career) and trail-blazer Colin Scott deserve a mention but Billy Slater’s efforts to play 31 Origins, scoring 12 tries and providing the attacking spark for the 2006-14 dynasty means he’s the No.1 choice among those who wore that number.

The Winger: Greg Inglis only played his first four Origins on the wing before mainly playing centre thereafter in his 32-game career but his natural athleticism means he’s too good to not have as one of the positional choices. His 18 tries is an all-time record, including the two he scored on debut as a 19-year-old in 2006.

The Centre: Mal Meninga’s feats of 175 points from 33 matches still count among the elite of Maroons royalty, managing longevity in a 15-year career which was nearly ended a couple of times due to serious arm injuries. But it’s not just the quantity of Meninga’s deeds that matter, it’s the quality he provided Queensland in bumping off defenders and inspiring his team particularly when he took over the captaincy from Wally Lewis.

The Five-Eighth: Wally Lewis is, was and always will be the King of State of Origin. He thrived so much as a Queenslander overcoming the odds in the interstate arena – it propelled a player who already dominated on the club and international scene to his own stratosphere. He still holds the record for most man of the match awards with eight and it’s fitting that the best player from either team each year is awarded the Wally Lewis Medal.

The Halfback: With all respect to Johnathan Thurston and Cooper Cronk, it’s Allan Langer who sums up the Queensland No.7 jersey. “Alfie” was never fashionable but always effective in 34 Origins for the Maroons. He deceived opponents with his lack of size and also used it to his advantage by darting between defenders or sprinting through the line after dribbling a kick into the backfield. His 2001 game-three comeback when flying back from England where he’d been playing for Warrington was so special it even made Wayne Bennett giddy with excitement after the win.

The Lock: Paul Vautin is another player who was not necessarily given the respect he was due because he was not seen as particularly talented but his effort on and off the ball is a talent that cannot be taught. In all 21 of his matches for Queensland he punched above his weight and those teams went 14-7 during the late 1980s golden era.

The Second-Rower: Gorden Tallis may seem like the obvious choice here but Nate Myles has a better record at Origin level even though he does not have The Raging Bull’s reputation. Myles is not everyone’s cup of tea but being rugged and unsettling your opponents in the Origin arena is a valuable commodity.

The Prop: From the time Petero Civoniceva made his Origin debut in 2001 to his retirement 12 years later, he only missed three games for Queensland, making the team 33 times, which is still the most by any prop from either state. Big, mean and relentless, Petero left a trail of destruction in his wake that few big boppers could match.

The Hooker: Cameron Smith record of 42 Origins will probably never be bettered. Making Origin over the course of a decade is a feat reserved only for a select few but Smith’s time representing Queensland lasted 15 years before he finally called time at the end of 2017 to concentrate on what became his final three years in the NRL at Melbourne.

The Mr Fix-It Utility: Cooper Cronk spent the first six Origins of his 22-game career filling in wherever needed before that Darren Lockyer fella retired and he was elevated to the starting halves in 2012 alongside Johnathan Thurston.

The Captain: Darren Lockyer needs to be somewhere in here. He wasn’t a natural leader and was likely to get the sack after 2006 if the Maroons lost their fourth straight series but he grew into the role to rank alongside Lewis, Meninga and Smith as the Maroons’ greatest skippers in the Origin arena.

The One That Got Away: Luke Keary was born in Ipswich but his family moved to NSW when he was eight and he was ruled eligible for the Blues despite saying early in his NRL career that he saw himself as a Maroon. He played one game in 2020 for NSW but was dropped and a torn ACL last year and the rise of Jarome Luai have hampered his attempts to get back in the Blues side.

The Guy Who Gave it away Too Early: Israel Folau scored seven tries in his eight Origins before he went off and did something else. Not sure what happened to that guy but jeez he was blessed with athletic gifts – should have stuck with the rugby league caper.

The Most Talented: Dale Shearer was unfairly tagged with the mercurial adjective for much of his career but a more appropriate term would have been “a natural”. He marched to the beat of his own drummer but was good enough to score 12 tries in 27 Origins and after playing centre, wing and fullback, filled in at five-eighth superbly when Vautin’s Miracle Workers won the opening match of the 1995 series.

The Try-scorer: Darius Boyd’s 17 tries from 28 Origins is second all time only to Greg Inglis’ 18 from 32. Boyd benefitted from playing on the wing at the end of a red-hot Maroons backline but you don’t score that many tries without having an instinct for getting over the stripe.

The Stat Attack: Big burly prop Greg Dowling scored four tries in 11 Origins in the 1980s, including his famous fingertip snare off the crossbar in the mud at the SCG in 1984. He still holds the record for most tries by a front-rower for either state.

The Point-scorer: Johnathan Thurston is Origin’s greatest all-time pointscorer with 220 from five tries, 99 goals and a couple of field goals. Of course, his contributions were so much more than just scoring points, particularly the regularity with which he would set up tries for teammates. Not bad for a skinny back-up half who was not re-signed by Canterbury after the 2004 grand final.

The Guy Who Never Found His Niche: Michael Morgan was a victim of circumstance at Origin level. The Cowboys playmaker, in 12 games for Queensland, played three times at centre, once at fullback and the rest off the bench. It’s tough to get a gig in the starting halves when the names Cronk and Thurston are chiselled onto the team sheet.

The Best Defender: Gary Larson played 24 straight Origins from 1991-98 and you’d be hard pressed to find any vision of him missing a tackle. The North Sydney Bears second-rower was a man of few words but his actions on the field spoke volumes.

The Players’ Player: Gene Miles. Ask any of the Maroons players from the 1980s era and big Gino was the guy who doesn’t get the accolades he deserves. Wally Lewis was the King and Mal Meninga piled on the points but Miles at centre was almost as important in the Maroons’ success. His combination of size, strength and speed out wide was something the NSW defence struggled to behold.

The Accidental Hero: With Queensland down 1-0 in 2006, barely an eyebrow was raised in the NSW camp when Adam Mogg was brought in to make his debut. The Raiders winger went on to score two tries in his debut and then added another acrobatic effort in the series decider as Queensland upset NSW to kick-start an eight-year dynasty.

The import: Oh where do you start? Wherever you start, that’s in Queensland. NSW-born stars like Greg Inglis, Billy Moore, Wayne Bartrim and Sam Thaiday? How about Kiwi quartet Brad Thorn, Craig Smith, Josh Papali’i and Tonie Carroll. The unwitting trail blazer in this department was Adrian Lam. He had represented Papua New Guinea in 1994 but was picked for the Maroons the following year when Allan Langer, Kevin Walters and pretty much every Queensland eligible half had aligned with Super League. Lam went on to make 14 appearances for Queensland and also captained them while also playing 12 Tests for the Kumuls.

The bolter: Whenever rugby league publishes a dictionary, a picture of Ben Ikin as a pimply 18-year-old manchild should be all that needs to define this term. After playing just three matches for Gold Coast in 1995, he was selected for the Super League-decimated Maroons as the 17th available player they could find and not only held his own in that series off the bench, went on to enjoy a 17-Origin career and also represent his country despite serious knee injuries.

The under-used player: Chris Close was man of the match in the first two Origin matches but only played another seven games for Queensland as he battled injuries, form and fitness problems throughout the second half of the 1980s.

The hard-luck story: Jharal Yow Yeh had just started to realise his enormous potential in 2011 when the young Bronco played all three matches of the Origin series, scoring two tries on the wing to also earn three Kangaroos Test jerseys. However, a horrific leg injury playing for Brisbane early the next season was so serious it ended a promising career at the age of 22.

The late bloomer: Gary Coyne made his Origin debut a few months shy of his 28th birthday but the Canberra forward made the most of his chance, playing 11 matches, including the 1989 and ‘91 series victories.

The flash in the pan: Kerry Boustead played the last of his six Origins in 1984, scoring five tries along the way, but the former Kangaroos winger never played rep footy again after that year before retiring in 1990.

The big-game performer: Bob Lindner was a very good player during his first-grade career at Parramatta, Wests, Illawarra and the Gold Coast but never quite lived up to his representative reputation. In Origin, and for Australia for that matter, he was often one of the most influential players on the field in a decade-long career which earned him 26 Maroons jerseys.

The What-If Story: Peter Jackson was one of Queensland’s most passionate performers in the late 1980s and when Wally Lewis was close to retirement in the early ‘90s, “Action Jackson” seemed the heir apparent to the five-eighth’s jersey. But drug and mental health problems stemming from being sexually abused as a schoolboy derailed his career and he tragically died in 1997 at the age of 33.

The icon: Arthur Beetson is an Indigenous and Australian icon, and when it comes to Queensland’s Origin history, he will always be the first chapter. After having to represent NSW for most of his career because he played club football in Sydney, his effort to lead the Maroons to victory at Lang Park in the inaugural match in 1980 despite being at the end of his career and struggling to hold his spot in first grade will forever epitomise the Maroons’ fighting spirit.