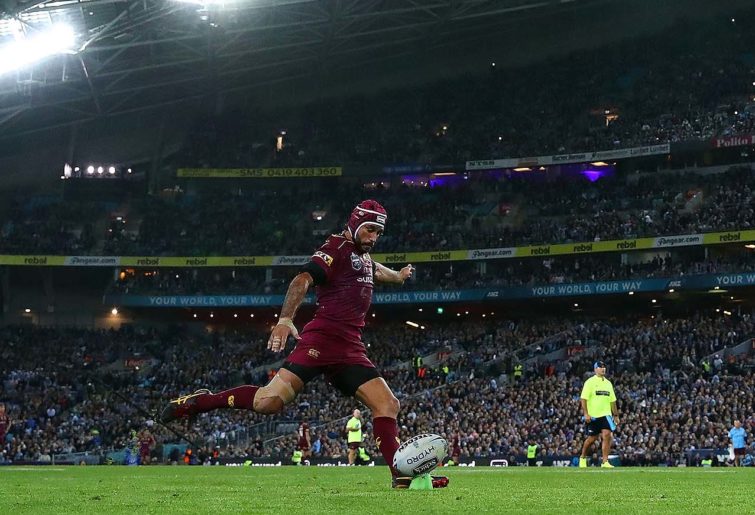 In my last article I selected a NSW team based on their point-scoring ability, so here’s their Queensland opposition. A team of players selected solely on the basis of the points that they have scored for Queensland in State of Origin matches (excluding Super League).

The criteria are that the player is only eligible for the position that they predominantly played for Queensland, and the eligible player who has scored the most points for Queensland in that position makes the team.

86 points from 11 tries and 21 goals in 13 games. Meninga has scored the second most Origin points for Queensland and landed seven goals from as many attempts in the very first Origin game in 1980.

72 points from 18 tries in 32 games. Inglis played the same number of Origins as Meninga and ran in nearly four times as many tries, including two on debut in 2006.

82 points from nine tries, 22 goals and two field goals in 36 games. He landed seven goals from as many attempts across his first three games for Queensland in 1998.

220 points from five tries, 99 goals and two field goals in 37 games. No one has scored more Origin points than Thurston, and he landed nine goals from as many attempts in Origin 3 in 2015.

58 points from five tries and 19 goals in 42 games. With Thurston in the side, Smith didn’t get many chances to kick goals, but his best effort was five from five in Game 1 of 2005.

12 points from three tries in seven games. Backo scored all of his tries in his first Origin series in 1988.

16 points from four tries in 17 games. Was victorious in only one of the games in which he scored a try.

12 points from three tries in 13 games. Scored a try in each of his first two Origins.

28 points from seven tries in 25 games. Queensland lost the first three games in which he scored a try.

That’s a star-studded line-up by any measure, and they should have far too many points in them for their NSW rivals.