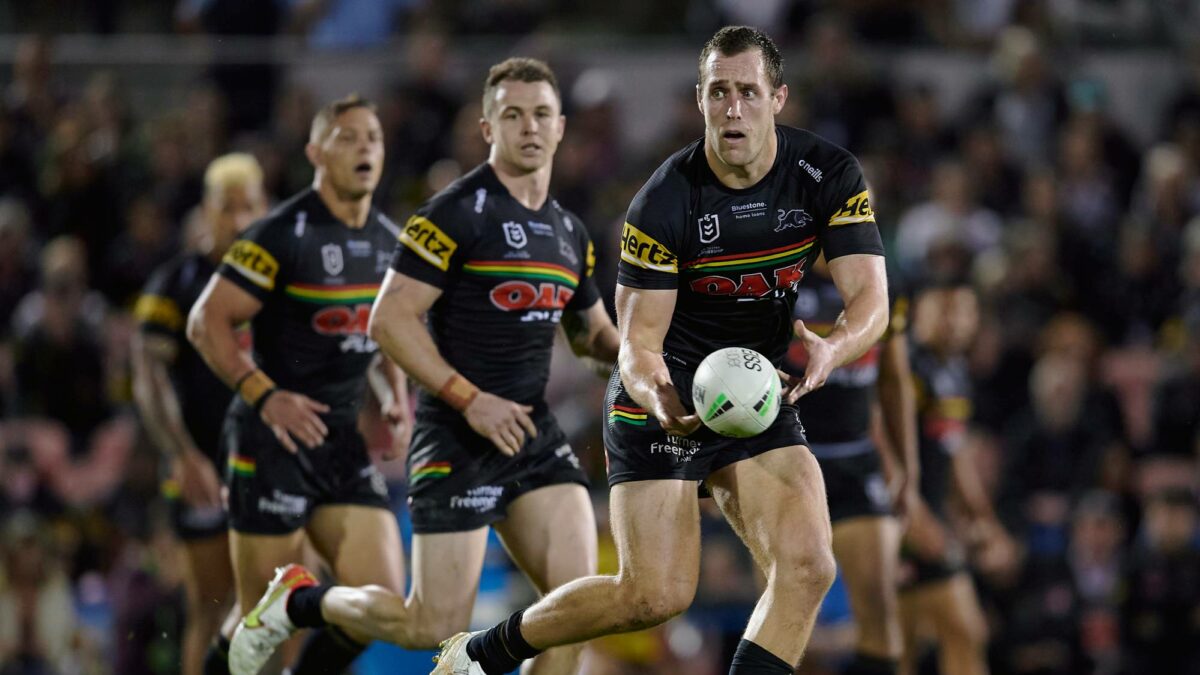 Round 8 was very exciting to watch – not so much fun to tip though!

On Thursday night, Kotoni Staggs told the NSW Origin selectors to ‘hold his beer’, while he showed all of us that he is still in the mix for selection. He dominated Siosifa Talakai and his wrecking ball ways during the Bronco’s 16-7 win over the Sharks.

In the first of the Friday night games, the Panthers beat the Gold Coast as expected, but it wasn’t the trashing that many of us predicted. Penrith were below their usual top standards but came back from a 4-0 half time deficit to win 18-4.

The second match saw a send-off that has divided social media discussions and made headlines ever since. Manly’s Karl Lawton put a dangerous manoeuvre on South’s Cam Murray and earnt himself a very big early mark. The Sea Eagles played with 12 men for 73 minutes and hung in as best they could to go down 40-22.

Super Saturday began with a Warriors golden point victory over the Raiders, who keep forgetting how long a game goes for. Getting out to yet another half time lead, only to do everything they could to help the Warrior back into the match. A late penalty to Matt Lodge for..um..getting hit in the head, made it 20-20 and Shaun Johnson kicked the winning field goal in extra time for a 21-20 Warriors victory.

And then…..who let the Dogs out?! While many thought it could happen, but not many were confident enough to say it out loud, the Bulldogs finally got back into the winner’s circle, beating the Roosters 16-12. Yes, the Roosters aren’t playing as well as normal, and they missed all their goal kicks that would have made a difference, but hats off to the Dogs for doing everything they needed to for the win. And didn’t Trent Barret look relieved?!

The last match on Saturday between the Eels and the Cowboys up in Darwin was supposed to be a close one between two of the top teams. Instead, we watched a Cowboys team full of confidence and temperature control put on a dominating performance to thrash the Eels 35-4. Maybe next time Parramatta should take a team that’s not as well climatised to the humidity?

Sunday saw Melbourne absolutely annihilate the Under 6’s Newcastle Knights team 50-2. No, that’s not fair, the Under 6’s would have at least scored a try. Boy oh boy, the Storm are just phenomenal and my Knights are…..something that cannot be printed.

In the final match of the round, the Dragons and the Tigers put on a defensive effort for the ages. A 2-0 Tigers half time lead which turned into a 12-6 victory for the Red V down in Wollongong. Isn’t Ben Hunt finding some form?!

It was a poor round of tipping, with everyone getting 4 and Mike getting 3. Paul and you champions in The Crowd are still in the overall lead on 43, Mary is second on 42, AJ is third with 41 and Mike and I equal fourth (I could say last, but I don’t want to) on 39.

After missing their first-round clash due to injury, tonight we finally see Adam Reynolds face his old club, when the Broncos and Souths meet at Accor Stadium at 8pm. How much of an impact will no Payne Haas or Kurt Capewell have to the outcome of this match?

The Bulldogs will be looking to make it back-to-back wins when the head down to Canberra to face the Raiders at 6pm. I think we can all agree that it will be fantastic to finally see Jarrod Croker run back out onto the field. Will his return see his Green Machine play for the whole 80 minutes?

The second of the Friday matches sees the Panthers host the Eels at Bluebet Stadium at 8pm. Can Parramatta bounce back to finally give Penrith their first loss of the season, or are the Panthers just unstoppable?

Super Saturday kicks off at 3pm when the Sea Eagles play the Tigers at 4 Pines Park. The Tigers will be trying to get that winning feeling back after going down to the Dragons, but will the return of Tommy Turbo spoil their plans?

At 5.30pm we head up to Mackay to see the Roosters take on the Titans. The Roosters lost to the Dogs last round; the Titans held the Panthers scoreless for the first half of their match – who knows what will happen in this one?

The last match of Super Saturday sees the red-hot Cowboys host the very lukewarm Knights up at Townsville. I am preparing myself for yet another thrashing.

The Dragons head down to Melbourne on Sunday to take on the Storm at 2pm. Melbourne are at their clinical best at the moment, but the Dragons are playing some good footy and will be doing their best to get their fourth win on the trot.

The Sharks and the Warriors finish off the round at 4pm on Sunday at Pointsbet Stadium. Has the Shark’s bubble burst? Could the Warriors cause an upset?

If you would like to see how you go up against the Experts this round, just remember to get your tips in below by 5pm tonight to be counted in The Crowd’s tips.

To help give him a bit of a boost after joining me on the golf course, I’m going to let Mike lead us off this week.

Good luck with your tipping everyone!

Souths will overcome Brisbane, largely due to Payne Haas not playing.

I cannot believe I didn’t tip the Doggies last week (though for the record, I put my hard-earned on them and took it to the bank) so I will definitely tip them this week.

Panthers are a million unbeaten at home, so that’s an easy win.

Manly are getting close to their best 17 (especially with Saab out) so I’ll take them over the Tigers.

The Roosters are bad, but the Titans are worse, so easy to go for the Chooks.

The last three games are obvious: Cowboys, Storm, Sharkies all the way.

Some interesting games this week to help me consolidate my incredible tipping for the first third of the season. We’ll start with South Sydney beating Brisbane on Thursday, although the Broncos are showing here and there that they’re turning the ship around after a barren couple of years.

Your presumptive champions, the people’s team, the Canberra Raiders will inject a huge dose of reality into the Canterbury Bulldogs, sending them packing with hard lessons and pain. Raiders by 56.

Penrith and Parramatta would usually be a belter but with the Eels’ injury woes and subsequent reshuffles I can’t see how they get past the undefeated Panthers this time round.

Manly were pretty good playing a man down for 71 minutes last Friday and I think they’ll squeak past Wests Tigers on the basis of their attack, even though the Tigers have conceded 10 less points, believe it or not.

The Roosters are heavy favourites to beat the Gold Coast but remember this game is in Mackay where it’ll be 26 degrees, humid and maybe rainy too. Does that mean the Titans can win? Maybe not, but it might mean the game stays close enough to worry the chooks.

North Queensland now have the new challenge – being expected to beat a bad opponent. They should deal with the Knights in Townsville. I will back Newcastle to score their first try in 2.5 games though!

The Dragons will give the Storm a punch in the mouth early with keen defence, but we all know how that story ends. After that game the Sharks should belt up the Warriors, although New Zealand have that knack in 2022 of dragging their opponent down to their own shocking level. I can remember maybe one decent performance out of the eight games from Nathan Brown’s men, but there they sit at 4-4.

Now that I look back on it, maybe the round isn’t as close as I first thought, and results will go to script…

Could this be a pre-eminent spoon bowl? The Raiders have been extremely disappointing and look ready for the season to be over… now. Whilst the Bulldogs have been average too, they are playing with a lot of spirit and will be on a high after their win last week. Without Jack Wighton, I’m tipping the Bulldogs to be able to do enough to beat the Raiders, especially with players like Matt Burton and Josh Addo-Carr.

The Eels are in the midst of an injury crisis and whilst I think we will see better effort than last week, the Panthers are the best team in the competition. Even when they play average, like last week, they still find a way to win and will do so again this weekend.

The Sea Eagles will have three Trbojevic’s playing for them this weekend and will beat the Tigers.

The next game is also a tough one. The Titans are the most erratic team in the competition and only look like scoring when David Fifita has the ball in hand. The Roosters attack is struggling; Victor Radley seems to stunt their attack and Luke Keary does not seem to have returned from injury as effective as he once was. I’m tipping the Roosters here, because if nothing else, if Joey Manu decides he wants to win the game for them, he will.

The Cowboys will continue flying high and will beat a Newcastle side that has looked disinterested for the last fortnight.

The Storm will beat the Dragons and the Sharks will bounce back with a win against the Warriors.

Souths should be able to account for Brisbane with Payne Haas and Kurt Capewell sidelined.

The Raiders have received the “do not tip until they win a game” stamp so Canterbury somehow are my tip in Canberra.

Penrith will be too strong all over the park for Parramatta, confirming this competition is a two-horse race.

Manly have Turbo back so Tigers won’t stand a chance.

Roosters are far from certainties against the Titans, but the Gold Coast are now the Bronze Coast they’re that far off the pace.

Cowboys could put 50 on the Knights.

The Storm could do likewise against the Dragons.

And Cronulla have been in a mini flat spell but a home game against the Warriors should be just the tonic for that.

Despite finally Reynolds finally getting to take on his old club, I don’t think emotion will be enough to make up for no Haas and Capewell or be enough to override Walker and Cook who are in fine form. Bunnies for the win.

As wonderful as it will be to see Jarrod Croker back into the Canberra side, I think his teammates will be looking at him to fix everything in one game, which he won’t be able to do. Dogs to go back-to-back.

Panthers will be fuming about being held to zero by the Titans in the first half last week and will come out firing. Eels are in for a tough night at the office.

I have no explanation other than a feeling. Can’t explain it, but I’m tipping the Tigers.

This match could turn into a car crash. I’m going Roosters only because I think they are bad at the moment and the Titans are just awful.

The Dragons will put in a good fight for the first part of the game, and then once the Strom have lulled them into a false sense of security, they will destroy them.

A couple of weeks ago I would have tipped Sharks without thinking. This game has been by back and forth one. I’ve settled on the Sharks, but not confident.

OMG this is starting to really hurt – we have so many injuries, we are using our 475th halves combination this season and seem to have forgotten how to play. But as always, I’m tipping my Knights.

Good luck this weekend. Be sure to check out the great odds and the same game Multi-feature at PlayUp. Please gamble responsibly.