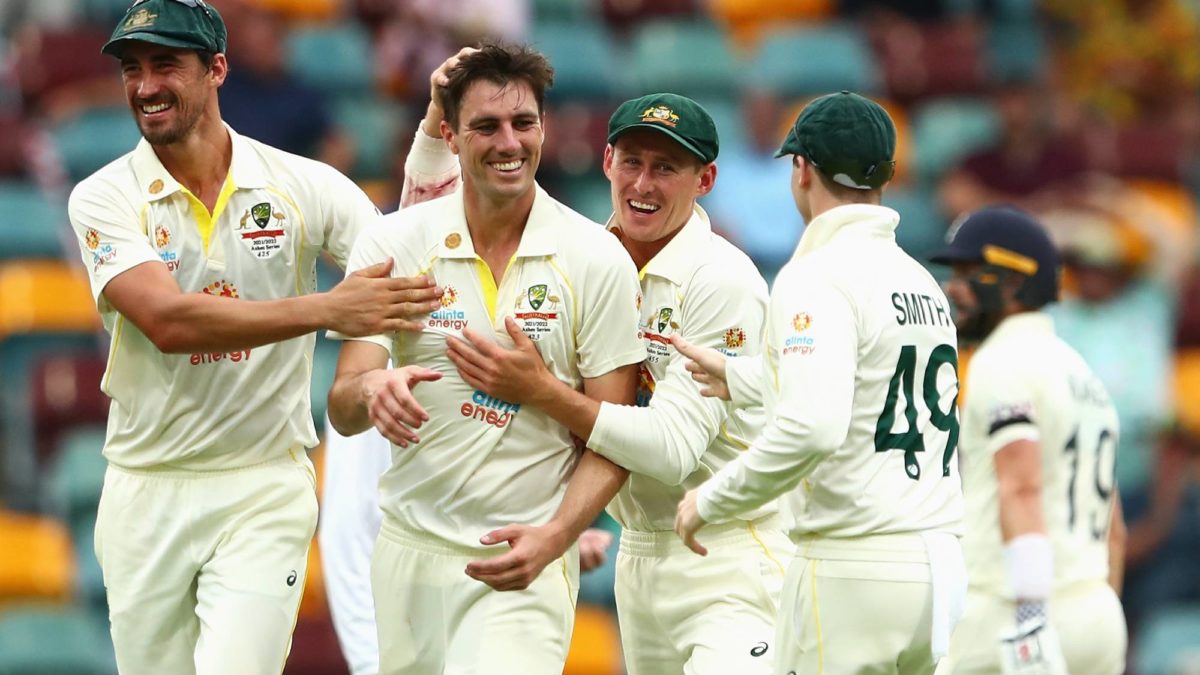 The world has recently moved into the 21st century with enthusiasm and verve.

A young Shane Watson strides out to bat in his debut Sheffield Shield game. His confident swagger hides the insecurities that all 19-year-old men pretend not to possess.

He notices something is askew. It is in the air.

You see, the future decent Test player and future one-day-cricket wonder is batting not for the state of Queensland where he grew up.

Many Queenslanders reading this previous sentence will no doubt have shuddered in recalling this travesty and will have certainly spat out their coffee, screamed ‘Wally Lewis’ and fainted.

Watson, in the pursuit of a professional career, is playing for a small island state once named Van Diemen’s land.

For those interested, Van Diemen was a Dutchman that never went to what is now known as Tasmania. So it made perfect sense to name the whole island after him.

Stuart Law, the Queensland captain, welcomes the young Watson with grace and understanding befitting a known young talent with the respect that he deserves.

By that I mean he berates the young man mercilessly for what he believes is callous treachery.

In Stuart Law’s defence, he was merely passing on a rite of passage to the youngster. When he had started out, the words used towards him would have made Rodney Rude squirm.

So what became of this incident at Bellerive.

After the match Watson refused to share the traditional beer on offer. This confused Stuart Law, the embodiment of manliness in the Australian domestic cricket culture.

For thousands of years it had been the way of the cricket bully to say and do whatever they wanted, whenever they wanted, only for the victim to pay homage to them after the game and thank them for toughening them up.

Of course when I say thousands of years, I mean since Ian Chappell.

Between that time and the few years after the turn of the century, Steve Waugh took things to a new level. His policy of mental disintegration had coincided with the emergence of the young professional cricketers that had graduated from the Australian Institute of Sport.

All of a sudden we were winning, he noticed.

Could this be because the new breed of cricketer had benefited from grassroots coaching and a clear pathway to the top like never before?

That nurturing talent, away from the likes of him and the Stuart Law-like characters of the domestic competition, at such a crucial formative time in their development, was far more beneficial?

Could devoting more time on improving techniques instead of improving the ability to endure verbal abuse be the secret to ensuring the success of the national team in the long term?

Steve Waugh thought long and hard on this.

No. It was because of sledging.

That and visiting Gallipoli on the way to London.

During the exchange in the dressing room in 2000, Watson not only refuses Stuart Law’s offer of an after-match beer, but actually just ups and leaves the dressing room and goes home. Quite the metaphor for not embracing the toxic, cancerous Australian cricket culture.

Sadly this defiance is short-lived and it is not long before business is back to usual.

Eventually Watson recovers from these unnecessary mental scars to carve an admirable international career, albeit an injury-plagued one initially.

Stuart Law on the other hand, rather ironically, takes up English residency, switching national loyalty in an attempt to resurrect his Test career and play for England. It is better for a Queenslander to move country than to move interstate.

That does not work out for him and later he returns to try his hand as an assistant coach in the Australian set-up, as many others of that era have done.

For any past player of that era, it is clear what kind of coach, commentator or mentor you should be.

Because if you do not help perpetuate the toxic, cancerous culture mentioned, we may still win, sure, but we won’t make grown men cry along the way, and that would be tantamount to treason.

Why would that be so important?

You may be the current Test captain and have a better bowling average and strike rate than Glenn McGrath.

You may have got to 100 Test wickets quicker than Dennis Lillee.

You may have been successful in the last three Ashes campaigns, the most recent as skipper.

But what would you know about cricket?

Only people that Shane Warne played with, players that were never required to play a reverse sweep, know anything about cricket.

Indeed, as a former player of this era, and now as a coach or commentator, you must expect the players to have respect. You should talk about this constantly.

But you should also feel free to disrespect any player that you want to, whenever you feel like it, as you did when you were playing.

You must advocate for loyalty from the current players but show no loyalty to anyone but your former teammates.

If a current player even looks like possibly being disloyal to you, or one of your former teammates, you should publicly call them gutless and forget that when you were a player you were also disloyal to any coach that you did not like.

You must ensure that discipline is something you talk about all the time.

You should also feel free to often show you had, and still have, no real discipline yourself.

When for example an Australian player gets out, your own discipline should be forgotten and you should immediately trash the room that you are in. But it’s okay so long as you clean it up afterwards in case the cameras are on you.

You should expect players to never make mistakes on the field. Even if your own Test average is inferior to that player.

You should assume that everyone considers your Test average to be double what it actually was. ‘Steve Smith averages 60. I averaged 80’ you should point out, for example.

When it comes to conversing with anyone that disagrees with you from the current team, you should behave in any way you like, because you can always state ‘I’m sorry’ for being too intense. If you are made accountable for your actions, that is.

Ideally, Cricket Australia should never have the audacity to make you accountable for your actions because you once played with Ricky Ponting.

Therefore you should not be considered an employee, rather a good bloke helping them out, despite the huge salary they pay you.

If anything other than the offer of a lifetime is made to you for anything to do with cricket, you should quit and mention you have only ever been totally honest, forgetting that you are not being honest when you also stated disingenuously you were sorry for being too intense.

So where did this culture evolve from?

Before the angry, Australian, cancerous culture, we never, ever won. Or is that true?

We could consider the teetotalling greatest of all time, Sir Don Bradman, never sledged anyone and never brought the game into disrepute.

But instead we’ll just take Ian Chappell at his word, ignoring that he has a bizarre personal grudge, and accept that despite being beloved by the country and the large majority of his teammates, Don Bradman was universally despised.

The problem with this is that anyone that actually knows would tell you otherwise.

If you asked the late Neil Harvey, arguably one of best batsman we’ve ever produced, he would tell you a different story to Ian Chappell. Harvey was known to come to tears of joy when describing the honour of having played with Sir Donald George Bradman.

Neil Harvey was also one of the biggest voices against the move toward the aggressive culture this article is about.

In 2001, Harvey said: “I was at the SCG during the Test and got together with a lot of the former players and the behaviour of this team was a talking point. Sam Loxton, Ian Meckiff, Lindsay Kline and Alan Davidson all indicated they were disgusted with the way this team carries on… The bloke in charge is one of the biggest sledgers of the lot… Although he doesn’t call it sledging any more, he calls it mental disintegration and as far as I’m concerned that’s a load of crap.”

Harsh words indeed against an era that many today put on such a high pedestal.

Players from the Steve Waugh and Ricky Ponting era that are condemning the current team for ostracising former players do not need to remember that Steve Waugh was known for banning Neil Harvey after this from the dressing room, as a result.

To the infamous sandpaper incident. By law we must mention this every time a conversation on cricket occurs.

It was an eye opener but was that a result of decades of passing on a win-at-all costs culture? A psyche embedded into the Australian cricket culture where disrespecting your opposition, and therefore the game itself, was seen as a display of strength?

Was it because there was pressure on the players to get the ball to reverse swing so that we could win the game, falling in line with the win-at-all costs culture that we never spoke about but deep down know existed?

No. It was because a coach had not routinely clunked the players heads’ together on a semi-daily basis.

By defeating England, with pretty much the exact same team this time around we have definitely improved under Justin Langer. Because we’ve once again beaten them exactly four-nil, just like last time.

To be fair, the England team is completely different. No, they’re pretty much the same too, so let us ignore that.

The truth is, and I am now speaking the truth, the appointment of Justin Langer has made no difference to results.

Frankly, at international level, you are the product of your domestic pathways. No head coach, no skipper with a penchant for volatility, and no amount of aggressive posturing from players can make any real difference when compared to the production of Test quality players from domestic pathways.

The appointment of Justin Langer was not wrong in regards to results. It was just insignificant.

Appointing Justin Langer to the role he had, knowing who he was and what he stood for, was the exact opposite thing needed if we wanted to fix the culture of cricket in Australia. A course correction was needed and we saw that last weekend.

We need to let go of the old ways and letting go of Justin Langer is a great start.

Now if we can just let go of the sandpaper thing and see it for what it was, a culmination of all that was wrong in Australian cricket culture over the past 30 years, then we can truly move on and start enjoying the game in the spirit that it was intended.

At that time Pat Cummins was a small boy playing backyard cricket in the lower Blue Mountains. It is hard to believe that it would take a seven-year-old boy from the quiet village of Mount Riverview, and a further 22 years for the Australian men’s cricket team, to finally see it, and its antiquated culture, enter the 21st century.

And not a moment too soon.