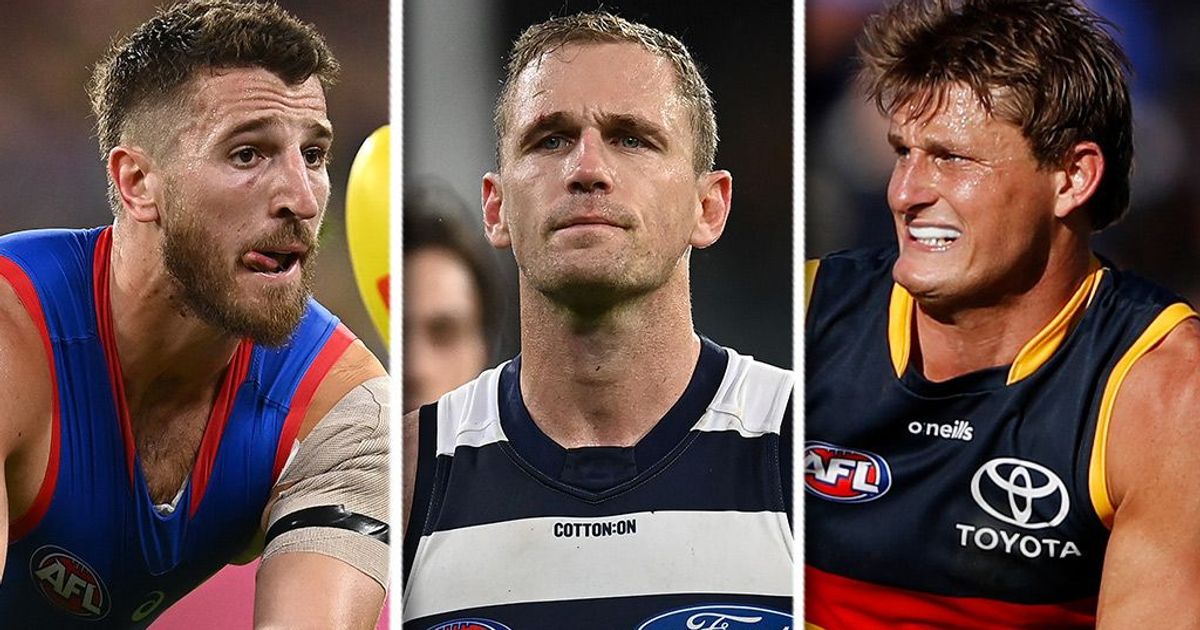 WESTERN Bulldogs superstar Marcus Bontempelli is being rested for Friday night’s match against Port Adelaide, while Geelong skipper Joel Selwood will miss the trip to Canberra to face GWS through injury.

Adelaide midfielder Matt Crouch has also been dropped for Sunday’s game against Carlton as a host of changes are made ahead of the weekend’s round.

Bontempelli has been battling an ankle niggle and is being managed as one of two changes for the Bulldogs ahead of the preliminary final rematch at Adelaide Oval, with Mitch Wallis also out with his foot injury.

It will be the first game the ‘Bont’ has missed since late in the 2018 season.

>> SCROLL DOWN FOR INS AND OUTS
>> CLICK HERE FOR FULL TEAMS

In the other Friday night game, Fremantle has lost six players to the health and safety protocols to face North Melbourne, but have some more-than-handy inclusions, led by ruckman Sean Darcy.

The Kangaroos have welcomed back defensive pillars Ben McKay and Aidan Corr.

Selwood (quad) is one of a number of forced changes for the Cats to face an unchanged Giants at Manuka Oval, with Max Holmes and Shaun Higgins also injured.

Brownlow medallist Patrick Dangerfield, who has missed the past fortnight, will also return.

Two other Brownlow medallists – Richmond duo Trent Cotchin and Dustin Martin – are back for the Tigers when they face Collingwood at the MCG on Saturday.

Paddy McCartin has been whisked straight back into Sydney’s team to face Gold Coast on Saturday after missing the loss against Brisbane with concussion, as has young tall forward Logan McDonald.

The Suns have been bolstered by the inclusion of defender Rory Thompson, playing his first game in almost four years, and youngster Wil Powell.

Speedster Nick Hind is back for Essendon, while midfielder Dylan Shiel is back in the Bombers’ 22 for their match against Hawthorn at Marvel Stadium on Saturday night.

Crouch has been omitted after playing the first seven games of the season for the Crows, which came on the back of a nightmare 2021, in which groin injuries wiped out his entire season.

The veteran is one of three changes alongside injured pair Ned McHenry and Brodie Smith to play in an Adelaide team to be skippered by Ben Keays.

>> GET YOUR TIPS IN AND WIN BIG

Carlton has recalled Zac Williams into its extended 26-man squad, with the running defender trying to overcome an achilles injury.

The Saints welcome back ruckman Rowan Marshall from his quad injury.

In: None
Out: X.Duursma (omitted)

Brisbane’s line-up will be released at 5.30pm AEST Friday

West Coast’s line-up will be released at 5.30pm AEST Friday