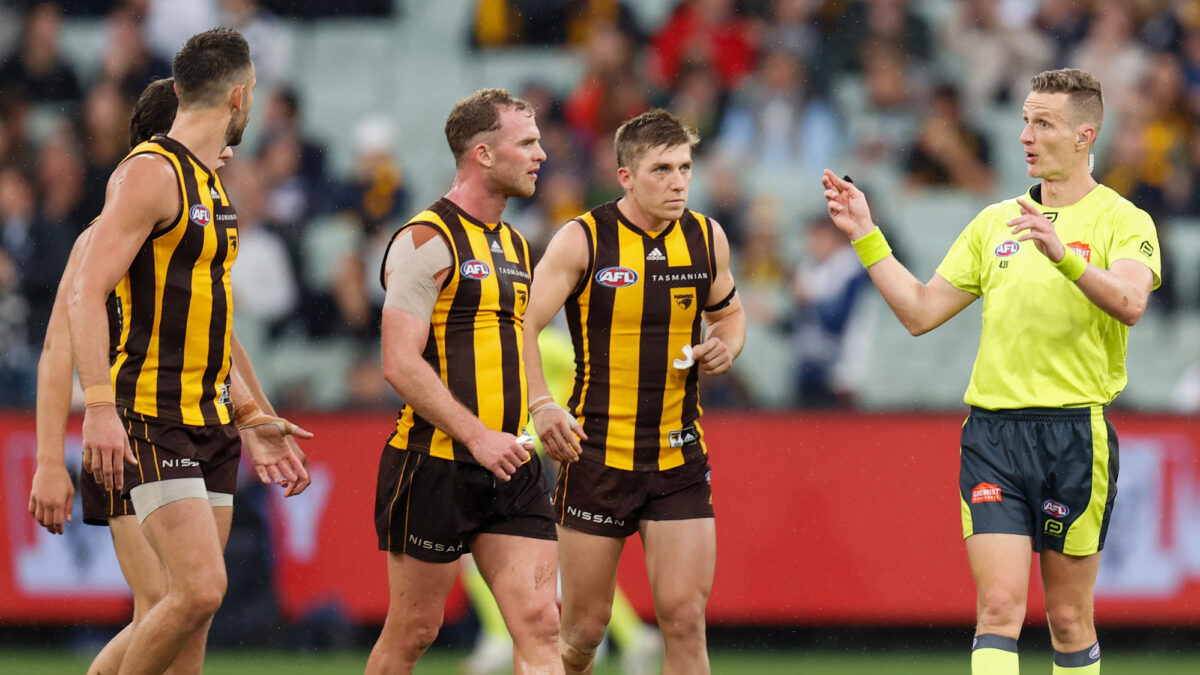 We all know the moment out of Easter Monday at the MCG that will dominate discussion for the next four days. So, let’s address it first.

The 50m penalty paid against Hawthorn and Tom Mitchell for disrespect was perfectly umpired, to the letter of the law, and absolutely ridiculous.

For starters, it’s a shame that a bona fide contender for game of the season, a match of drama, guts and mostly high quality, and a magnificent win by a never-say-die Hawthorn, will have this as its major talking point. So skip a few paragraphs ahead if you just want to talk about the game.

The whole point of the umpire disrespect crackdown, brought in at the start of the season, was to address the problematic situation umpires face at grassroots level, which can and does get far more confronting and violent than in the AFL.

It’s too early to say whether it’ll have any impact in the long run, but in the present, the opposite is true (as often happens with the AFL’s rule changes). Right now, umpires have never been more criticised, booed and abused on social media. You didn’t have to be a psychic to think that adding a new way to impact the game in such a significant way was going to lead to this.

None of this is the umpires’ fault – they have to call them as I see them, and Mitchell’s arms out was, according to the letter of the law, enough to concede a 50.

But a), there are going to be huge swathes of exactly that incident missed by the umpire (George Hewett’s on Sunday the most striking example) that aren’t paid, which will lead to yet more controversy; and b), giving up effectively a third of the ground for what Mitchell did is obviously completely nuts.

This doesn’t even need the ‘what if it happened in the last five minutes of a grand final’ pub test. We just have to thank our lucky stars it didn’t cost the Hawks the game.

Tom Mitchell of the Hawks speaks with AFL umpire Hayden Gavine after a 50-metre penalty was awarded to Geelong. (Photo by Michael Willson/AFL Photos via Getty Images)

Onto the actual match, and the most striking point was the Hawks’ tactical shift, particularly in the first quarter. Under Sam Mitchell, they’ve thus far been able to cope with heavy losses in possession and inside-50 counts, banking on their defensive structure to hold firm.

Against a Jeremy Cameron and Tom Hawkins-led Cats attack, that was never going to be enough. So manic intensity at the contest – we should have known based on that ‘bring your mouthguards’ mid-week training session – became the Hawks’ modus operandi at the MCG.

The result? Three goals before Geelong registered a disposal, Dylan Moore winning two free kicks for high contact for two goals simply going harder at the footy. The Cats were always going to respond, but the Hawks were in the match up to their eyeballs.

The Hawks led the contested possession stat 35 to 21 at quarter time, having been smashed in that stat for the past three weeks. Just as interesting was who was doing the dirty work – with Tom Mitchell largely peripheral, it was Jai Newcome who assumed the role of ball-winner in chief, racking up eight touches for the quarter.

To be sure, it helped to have James Sicily playing one of THOSE games in defence. The Cats can usually expect the ball to be brought to ground when they bomb it in by one of Hawkins or Cameron, but the Hawk, reading the ball superbly in the air, simply took mark after mark. By the first five minutes of the second term, he had four intercept grabs and ten overall, constantly stymying the Cats’ movement into attack.

But Sicily’s heroics couldn’t last forever, and eventually, the Cats got on top through sheer weight of numbers. Their kicking efficiency, at 58 per cent at quarter time, slowly improved, giving Hawkins and Cameron plentiful opportunities to start kicking goals.

At their feet, Tyson Stengle benefitted from at last having crumbs to work with: after one possession in the first term, he bagged three goals across the second and third.

While not as dominant as you’d have expected, the Cats’ ascendancy in the clearances was apparent once Hawks ruckman Ned Reeves went off with a dislocated shoulder near quarter time. As a result, the Cats had nine more inside-50s for the term, and without Sicily marking everything, the Cats drew to within ten points at half time.

Flashpoint appeared to have arrived during the third term as the Cats again took control; it was all the Hawks could do at times to keep themselves afloat. 16 marks inside-50, which Geelong reached midway through the third quarter, told of the array of options the Cats had in attack, and the space opening up as the Hawks’ defensive structure buckled under the strain.

Twelve points up at three quarter time, only inaccuracy – the most egregious miss Hawkins’ snap from five metres out and directly in front – had prevented the Cats from running away with it. Mitch Duncan and Isaac Smith controlled the game with raking runs and (mostly) precise ball use, and the match was on the Cats’ terms – a free-flowing, loose-checking game.

It’s at this point where Tom Mitchell decided to step up.

Playing a team-first role splitting his time between midfield and forward, he moved to permanent on-ball duties in the last quarter as Sam Mitchell looked to fight the tide with his best ball-winners. It worked. Mitchell the player had 13 touches with the game on the line, his contested possession numbers improving to a whopping 22, while eight of his nine clearances came after half time.

It was thanks to him that the Hawks, despite needing to ruck with a Jacob Koschitzke-Conor Nash combo, matched the Cats blow for blow in centre clearances. He was magnificent.

Worryingly for Geelong, the only player seemingly capable of returning fire was the ageless Joel Selwood, who fit into the wet-weather conditions like a hand into a particularly snug glove. At 33, and despite frequent stints on the interchange bench, he was far and away the most hard-nosed Cat on a day that required nothing less than total commitment.

Brandan Parfitt did some occasional nice things, but five contested possessions and three clearances from a first-choice midfielder isn’t enough on a wet day. Even Jaeger O’Meara, who managed just 15 disposals for Hawthorn and again struggled for midfield minutes, managed 11 and five. A player whose one-wood is his tenacious tackling and fierce pressure, and the future leader of the Cats’ midfield brigade when Selwood hangs up his boots, Parfitt has time to make amends.

Less likely to is Patrick Dangerfield, who was worryingly down on his best, lacking his usual explosiveness from stoppages and any semblance of influence on the game. In the same boat is Rhys Stanley, who at 31 has gone beyond questions whether he will make it as an AFL ruckman, and into whether the best option on the Cats’ list not currently injured can avoid being too crippling a deficit.

In a rarity, Stanley had the benefit of an undersized and ill-prepared ruck opposition. But despite 25 hit outs, he had no impact on helping the Cats win the clearances, his primary role. Jonathon Ceglar’s chances of breaking into the team once he returns have never looked stronger.

The Hawks won 17 more contested possessions in the final quarter, kicking four goals to none. It’s not too simplistic to say they just wanted it more.

As a last thought, there was some social media outcry over Hawks’ fans decision to boo Isaac Smith throughout the match, he of the three premierships and iconic status in the brown and gold.

This was as pantomime as it gets – Smith’s grin as he lined up for goal in the first term told of just how seriously he was taking it. Players who change clubs get booed when they return to face them – it’s been part of the game for generations. Especially those who leave chasing further success.

It’s safe to say the Hawks, and those booing fans, got the last laugh.