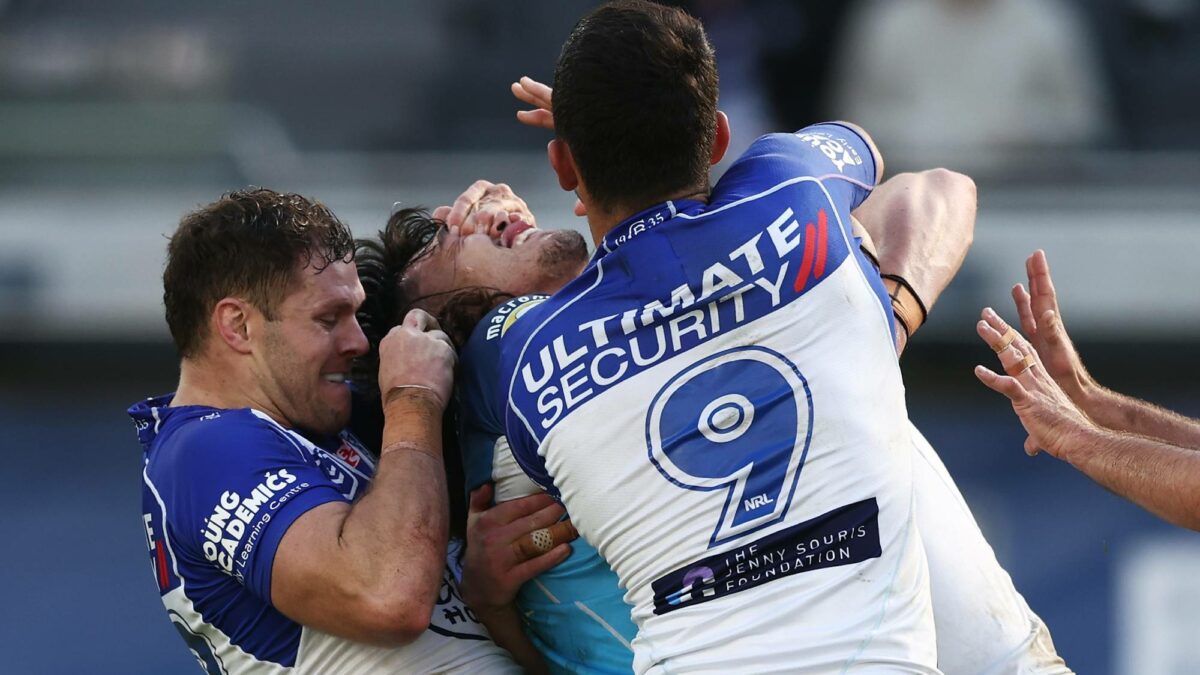 Canterbury forward Corey Waddell will front the NRL judiciary on Tuesday night after being referred directly to a panel hearing by the match review committee.

Waddell was charged with dangerous contact over an incident in the 23rd minute of his team’s win over the Gold Coast at CommBank Stadium on Sunday.

The back-rower grabbed Titans captain Tino Fa’asuamaleaui on the face during a tackle and the Maroons forward immediately protested to referee Ben Cummins that he had been eye-gouged.

After the game he told Fox League he didn’t think there was any intent from the Bulldogs forward to cause damage.

“It’s just footy. Sometimes your hand goes somewhere and you don’t know where it is,” he said. “I guess it was just around my forehead and hit my eye but it was just accidental.

“I didn’t speak to him [after the game] but it’s just an incident on the field where it’s accidental.

“Your hand ends up in places that you don’t know.”

Wests Tigers winger Ken Maumalo is facing a fine of $1000-$1500 for a shoulder charge on Cowboys playmaker Tom Dearden in Sunday’s controversial one-point win to North Queensland in Townsville.

Cronulla will also head to the NRL judiciary on Tuesday night to plead not guilty to the grade-three dangerous contact charge levelled against Dale Finucane.

The veteran lock was charged by the match review committee following a tackle on Panthers centre Stephen Crichton in the 72nd minute of the loss to Penrith which left the NSW representative with a badly lacerated ear which coach Ivan Cleary likened to a car crash injury.

Former Gold Coast captain Kevin Proctor is in hot water after posting a video on social media of himself vaping inside CommBank Stadium during the NRL club’s loss to Canterbury.

In a now-deleted Instagram story, Proctor can be seen vaping inside a cubicle at CommBank Stadium at halftime of the 36-26 loss on Sunday.

The video was uploaded with the caption “not the halftime vape”, with Proctor inhaling and then shaking his head with the Titans down 26-10 at the time.

Proctor was not playing in the match, but was part of the squad as 19th man with the video believed to be taken within a toilet cubicle inside the Titans’ changerooms.

Stadium officials have also confirmed to AAP that vaping is not permitted in the seating bowl or anywhere around the stadium.

In order for people to vape or smoke at the venue, they are required to request a pass out and go outside of the stadium itself.

The incident has been noted by both the NRL and the Titans, with Proctor expected to face some disciplinary action from the club as soon as Monday.

A co-captain at the club as recently as last year, Proctor has not featured for the Titans since round nine in May.

The matter from a senior player again raises the issue of culture at the NRL club, who have lost their last eight games.

They sit above only Wests Tigers on for-and-against at the bottom of the NRL ladder, with coach Justin Holbrook’s job firmly in the spotlight.

Holbrook conceded again on Sunday that a lack of experience was a key issue, after releasing established halfback Jamal Fogarty at the start of the season.

Titans management had declared at the end of last year that they were on the verge of a premiership window, believing two titles were possible before 2030.

Kalyn Ponga may have played his last game for 2022 with the Newcastle fullback to see specialists this week to determine whether he needs an extended break after a string of concussions.

The Knights star was forced off early in the loss to the Roosters on the weekend, his third concussion in the past two months.

The club is reportedly considering ending his season early to give him the best possible chance to make a full recovery. Newcastle are in 14th spot and no chance of making the finals after their defeat in Round 19.

“It’s a weird one, I’m sort of guided now by the specialists and I’ll see them as soon as I can and just go from there really,” Ponga said on The Matty Johns Show on Sunday night.

“I’m not really too sure, I’m guided by what the specialist says. It’s an unfortunate thing, you can’t really do physio on your brain or anything like that, it’s just time away from the game.”

Knights Immortal Andrew Johns earlier in the day said Ponga should not take to the field again until 2023.

“They’re not going to make the semis, so why would you risk a player like Kalyn?” Johns said on The Sunday Footy Show.

“I think that’s it for the year. Just let him have some time off because he’s too important to the team.”

Manly have created history by announcing they will become the first NRL team to wear a rainbow jersey “to celebrate inclusiveness” when they take on the Roosters at 4 Pines Park on Thursday night.

The “Everyone in League” jersey is the first of its kind for an NRL club while the AFL and AFLW have held a pride round for the past few years.

Interim Sea Eagles CEO Gary Wolman said the club was proud of the jersey which embraces the LGBTQIA+ community.

Former international Ian Roberts became the first professional sportsman in Australia to declare they were openly gay during their career while playing for the Sea Eagles in the 1990s.

“The Sea Eagles have such a rich and diverse history in rugby league and in the community,’’ Wolman said.

“To be able to bring this concept to life with Dynasty Sport is a fantastic achievement and we are pleased to be able to share such an important message that means so much to many people in the community.”

Dynasty Sport founder Tyler Rakich said “The design itself maintains the iconic Manly DNA with the striped design and maroon but with the subtle inclusion of the rainbow colours which are a nod to inclusivity for Everyone in League.”

Melbourne are desperately trying to bolster their outside backs before the August 1 signings deadline but Canterbury have rejected an attempt from the Storm to have Josh Addo-Carr return for the rest of the season.

The Storm enquired to see if the Dogs would loan The Foxx to them after fullback Ryan Papenhuyzen became the latest outside back to suffer a serious injury with his fractured kneecap sidelining him until 2023.

Reimis Smith and George Jennings are also gone for the year.

The Sydney Morning Herald reported that Addo-Carr would have returned to Canterbury following the short-term stint to see out the final two years of his contract under the Storm’s proposal but they were not interested.

Addo-Carr scored three tries in Sunday’s 36-26 triumph over the Titans and despite missing out on State of Origin selection for NSW, is a frontrunner for a wing berth in the Australian squad for the World Cup.

According to the SMH, the Storm have also asked about Titans rising star Jayden Campbell and Tigers duo Daine Laurie and Adam Doueihi, while last week they unsuccessfully tried to get Broncos-bound fullback Reece Walsh from the Warriors.

Coates is close to making a return from the ankle injury he suffered in Origin I. The Storm have dropped to fifth after a four-game losing streak and travel to Auckland on Friday to face the Warriors.