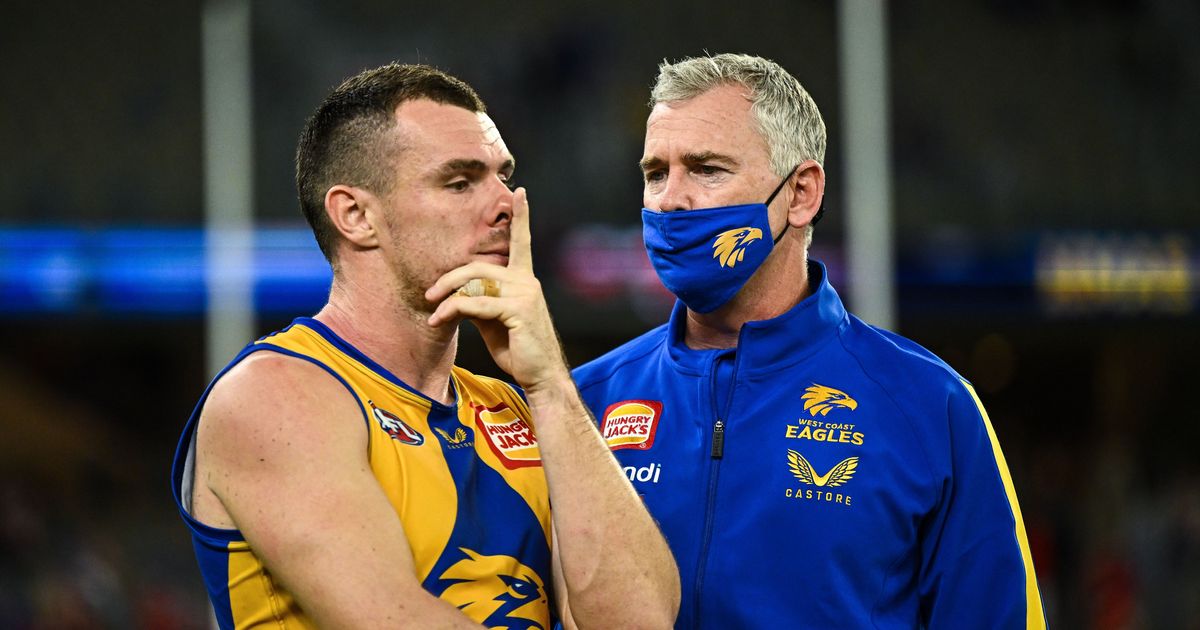 The Eagles went down by 63 points against the Swans, after being blown away in an awfully lopsided first half where Sydney had 39-10 inside 50s and led by 58 points at the main break.

West Coast struggled to find a way to halt the momentum as Sydney kicked the first eight goals of the game, effectively ending the match as a contest before half-time.

The loss was similar to last year’s 55-point defeat to the Western Bulldogs at the same venue, when they opted to bring back Shuey and Kelly after layoffs with Yeo only in his fourth game back from long-term injury.

On Friday, Shuey, Kelly and Yeo all struggled for impact on their returns, managing 18, 16 and 15 disposals respectively, although the latter spent a lengthy period off the field in the first quarter undergoing a concussion test.

Eagles skipper Shuey had missed the past two games due to health and safety protocols after playing in round two following a pre-season hamstring injury, while Yeo was re-introduced after he got through 70 minutes in the WAFL last weekend after a calf injury in February.

Kelly was returning after he strained his hamstring in the round two loss to North Melbourne, the game after he came out of protocols. Forward Jamie Cripps was also playing his first game after a pre-season pectoral injury, gathering 11 disposals with one goal.

“It’s no excuse. You can’t point the finger at those three,” Simpson said after the game.

“I think we’ve got to take the whole 22 plus the coaches on this one. We’ll own it together, we’ve got their backs, we know they’re good players, we know we’re better than what we produced tonight.”

When asked about the decision to bring all three back together, Simpson added: “We don’t really have a choice. They’re three of our best players. We need to get them going.

“There’s only so much you can do other than playing them at WAFL which we did with Elliot Yeo last week. Luke missed two weeks through COVID. They need to play. They need to get that match fitness at AFL level. We need to get the best of them. We’re working on that.

“They’re very good players. But the synergy is not there obviously. But that’s not a reason for the first quarter in particular, so we’re not making any excuses.”

Simpson labelled his side’s first-half display as “extremely disappointing”, with Sydney’s 39-10 inside-50 count marking the biggest differential at half-time in an AFL game since 2018.

The Eagles have endured a nightmare start to the season with injuries along with players entering health and safety protocols, but the defeat leaves them 1-4 ahead of an away clash to struggling Port Adelaide in round six.

“Our industry doesn’t wait for anyone, so if we don’t start winning, we won’t be a chance of playing finals,” Simpson said.

“We are working on our identity of the way we want to play, and tonight you saw nothing of it. But success is not a straight arrow. There’s going to be some ups and downs. But by no means are we accepting what happened tonight as a growth opportunity. It was disappointing.”

Sydney coach John Longmire was delighted with his side’s performance up forward without Lance Franklin (finger) and Tom Papley (hamstring) as they kicked 18 goals with 11 different goalkickers.

“We’ve got Papley and Franklin sitting at home, two of our regular scoreboard hitters and Wicks,” he said. “We were able to give our boys some supply.

“We had a lot of repeat entries, so our pressure inside and structure outside was strong early. We were able to win in the midfield and get it into the forward line. To have 11 goalscorers was a good spread all round.”

Isaac Heeney led the way with three goals to take his season tally to 14, second in the Coleman Medal race. Heeney has been used in multiple roles this season, including the midfield earning praise from Longmire.

“Inside out on the wing … It’s been important for him to change up in the course of the game and he’s a real threat wherever he is.”