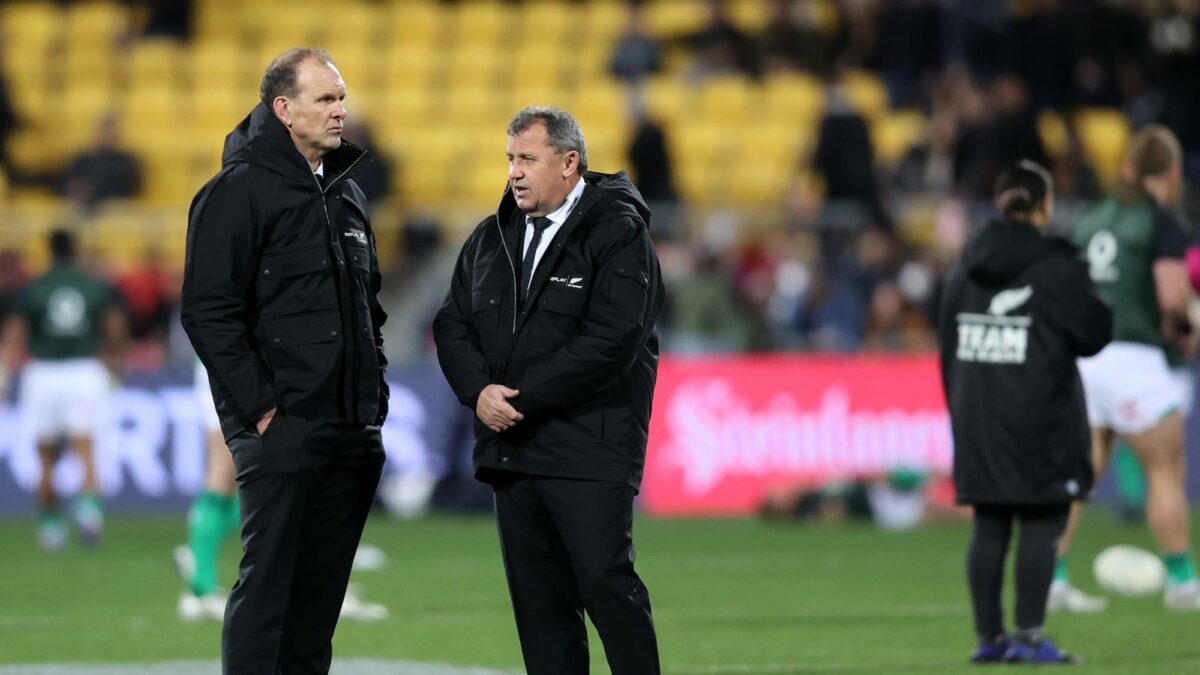 The All Blacks have parted ways with assistant coaches John Plumtree and Brad Mooar after the series loss to Ireland.

Under fire head coach Ian Foster announced the changes on Sunday for the Rugby Championship.

In a statement New Zealand Rugby said “robust and in-depth conversations took place with various stakeholders following the [Ireland] series, with a focus on finding ways to improve performance both now and leading into RWC 2023.”

“Right now, I am really feeling for two fine men who are great rugby coaches that made an enormous contribution to the All Blacks,” Foster said in a NZR statement.

I have no doubt both coaches will go on to great success and I want to thank them for their hard work.”

The All Blacks have brought in Crusaders and Fiji forwards coach Jason Ryan.

“Jason is a proven performer with plenty of experience at international level,” said Foster. “Last year we witnessed first-hand the impact he has made on Fiji’s forwards, adding to his continual growth as the forwards coach of the Crusaders. His appointment now is clearly with an eye to the future and to the RWC 2023.”

Joe Schmidt will formally starts his role as independent All Blacks selector. In addition to that, Schmidt has a key analysis role and will work with Foster on overall strategy and attack play.

Foster will resume leading the backs “in the short term”, according to the statement.

Tonga have advanced to next year’s Rugby World Cup in France after a 44-22 win over Hong Kong in the final of an Asia Pacific qualifying tournament.

Tonga led 20-8 at halftime after Sonatane Takulua scored two tries and added a third in the second half at the Sunshine Coast Stadium.

Tonga will play in Pool B in France with defending champions South Africa, No. 1-ranked Ireland, Scotland and Romania.

Hong Kong can still qualify for France via a second-chance tournament in Dubai in November.

A four-team tournament also involving the United States, Kenya and Portugal will determine the 20th team, with the winner joining Pool C with Australia, Wales, Georgia and Fiji.

South Africa have recalled experienced duo Duane Vermeulen and Frans Steyn to their squad for the home leg of the Rugby Championship but will be without injured wing Cheslin Kolbe.

No.8 Vermeulen (knee) and utility back Steyn (hamstring), who both won the World Cup with the Springboks in 2019, have recovered from injuries that kept them out of the 2-1 home series win over Wales this month.

“Duane and Frans are both very experienced players and they each have valuable traits that they bring to the field of play, so we are excited to welcome them into the fold,” Bok coach Jacques Nienaber said in a media release from South African Rugby.

“This will offer the coaches and medical staff a good opportunity to determine where they are in terms of their rugby.”

Fullback Aphelele Fassi and loose-forward Marcell Coetzee have been released from the squad, while Kolbe is recovering from the broken jaw he sustained against Wales and will be available for selection again in September.

The Boks play back-to-back Tests against New Zealand in Nelspruit on August 6 and Johannesburg a week later, before they head to Australia for two matches.

Former All Blacks coach Laurie Mains believes social media has added to the distress of the job but believes Ian Foster can turn things around after a shocking run of four losses from five games.

“There is always pressure on an All Blacks coach,” Mains told Stuff.

“The rugby family in New Zealand doesn’t want the All Blacks to ever lose and they think it’s possible they can carry on winning. But it simply isn’t possible.

“I think Ian is under more pressure than an All Blacks coach has had before, because the media scrutinises more intensively than it used to and social media is much more active. So those things create pressure.

“To be honest, I have a great deal of sympathy for Ian. He went into that job wanting to do his best and things haven’t quite worked out for him.

“The comment I would make, and this could be determined in two different ways, is that if you carry on doing the same thing, you can’t expect to change the results.

“We did hear a few years ago that the All Blacks had this new game plan coming on and with Ian being the backs coach at the time, he would have been an integral part of that.

“But we really didn’t see any change, other than dropping Ben Smith and Beauden Barrett being put to fullback and I don’t think that made a significant difference.”

The All Blacks have made few changes to the squad for the Rugby Championship openers against South Africa, with prop Ethan de Groot and loose forward Shannon Frizell earning recalls in place of Karl Tu’inukuafe and Pita Gus Sowakula.

“The Irish exposed that and the French did a year ago.

“That comes about because of a couple of reasons. I don’t think it’s the ability of our players, it’s just that they’re not performing at their best.

“The reason for that, which is where the coaches’ responsibilities lie, is that they need to come up with a game plan that suits the group of players involved.

“Then it’s his job to make sure every player in the squad understands the game plan and their role in making it work.”

Mains said it was possible for Foster to spark change.

“They’ve got to come up with the ideas and analysis of what’s been going wrong and what’s happening in rugby today, where the strong defensive areas are. Then develop a plan to overcome that,” he said.

“To be honest it’s not that difficult to do. Earle Kirton (former All Blacks selector and assistant coach) and I had to do it for the 1995 World Cup, because we thought the other teams around the world had caught up with All Black rugby.”

Georgian referee Nika Amashukeli will be in charge when the All Blacks host Argentina in a Rugby Championship match in Christchurch next month and he could be younger than both captains.

Amashukeli is 27. The ABs’ current captain is Sam Cane, 30, while Julian Montoya and Pablo Matera, who have led the Pumas recently are 28.