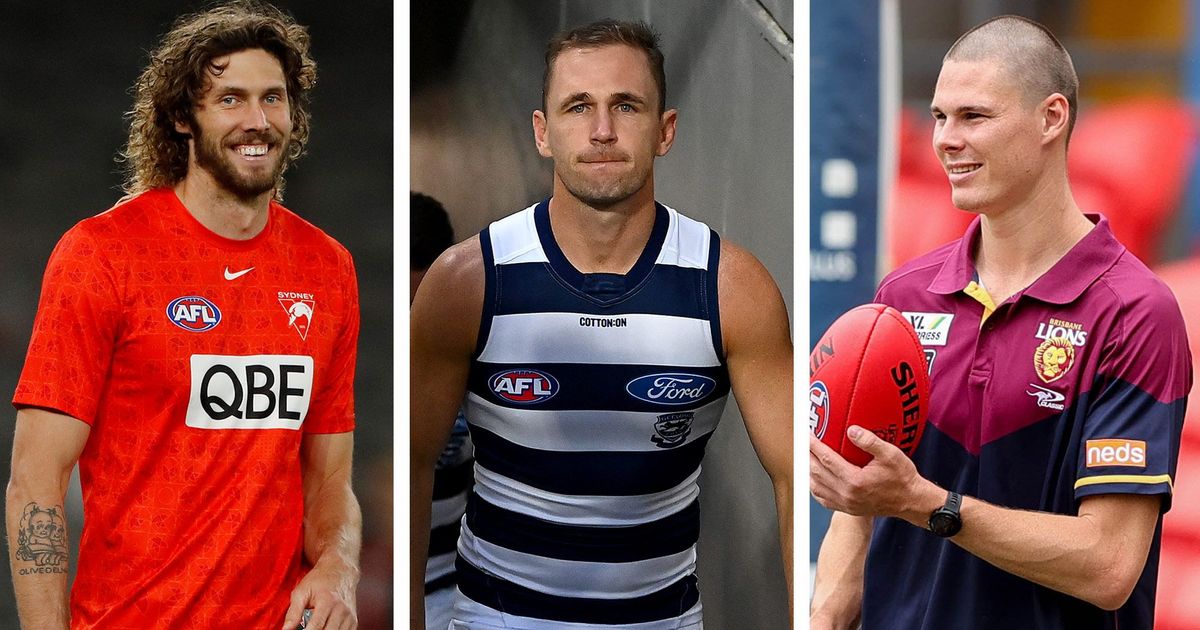 WHO IS a chance to play in round nine?

In this week’s In the Mix we find the players who are giving their selectors plenty of food for thought.

Who’s going out, who’s sore, who is under the pump? Our reporters attempt to pick all the R9 ins and outs. Check it out.

Brodie Smith and Ned McHenry should be available after missing the round eight loss to Carlton with concussion. Experienced onballer Matt Crouch was dropped for that match and will have his hand up for a recall after racking up 36 disposals in the SANFL. Midfielder Jake Soligo (29 and 13 tackles), defender Patrick Parnell (19) and ruckman Kieran Strachan (56 hit-outs and seven clearances) are others pushing for selection if statements are made by the match committee. Forward James Rowe could also be elevated into the 22 .

Eric Hipwood will play his first game since rupturing his ACL last July, but the decision for Chris Fagan is whether that is in the AFL or a VFL practice match against Gold Coast. With Dan McStay and Joe Daniher out injured for at least the next three weeks, Hipwood or Tom Fullarton seem the likely replacement to partner Jack Payne and Darcy Fort against Adelaide. Mitch Robinson kicked three goals from 31 disposals in the VFL to continue pushing his case, while Rhys Mathieson and Deven Robertson were also strong at the lower level.

The Blues will have a decision to make in terms of who replaces Jack Martin, who has sustained a minor calf strain. George Hewett is an outside chance to return from his own calf knock, while Paddy Dow had 33 disposals and kicked two goals in the VFL last weekend. Lachie Fogarty is a more like-for-like replacement, though, and had 27 disposals, 12 tackles and a goal in the reserves. Jesse Motlop is also a chance to step up for his AFL debut. Lachie Plowman should be fit following an illness, but his replacement Jordan Boyd was solid at senior level and deserves another go. Caleb Marchbank had 20 disposals and five marks in the VFL on his return from an ACL injury, but needs more minutes under his belt before he’s considered for selection.

Verdict: Hewett for Martin, unless he’s deemed unfit to feature just yet. In that case, expect his spot to go to either Fogarty or Motlop. – Riley Beveridge

Collingwood’s VFL side had the bye last weekend, but Craig McRae might consider some changes after the disappointing loss to Richmond. Caleb Poulter was a senior emergency on the weekend and could finally get his first opportunity of the season. The Magpies might also reconsider its stance on Mason Cox as they look to limit the loss of Brodie Grundy against the Western Bulldogs, who expect to be boosted by the return of Tim English. Callum Brown and Reef McInnes are two other players who could be considered after being in the 26-man squad on the weekend.

Verdict: Cox to replace Aiden Begg, Poulter to get his first shot of 2022 in place of Trent Bianco. – Josh Gabelich

There will be a suite of changes for the Bombers this week after their illness-hit squad came through with the win over Hawthorn last round. Expect Jordan Ridley, Jake Kelly, Matt Guelfi, Sam Durham and Alec Waterman to all be available, while Nik Cox is a chance to return from his ankle injury. The players who came in last week will be unlucky to miss out, having all done their bit in the comeback win, but Kaine Baldwin, Brayden Ham, Brandon Zerk-Thatcher, Devon Smith and Nick Bryan could all be back out ahead of the trip to Sydney.

The depth at the Dockers is becoming clearer by the week, with a logjam looming as players return from health and safety protocols. Rory Lobb, Blake Acres, Travis Colyer and Michael Frederick should all be selected against Gold Coast if ready, while Griffin Logue may be unlucky after Heath Chapman and Hayden Young returned against North Melbourne. Forward Sam Sturt booted three goals in the WAFL and is closing in on an AFL return, while Neil Erasmus won plenty of the ball in a short period as the AFL substitute before impressing with Peel the following day. Jye Amiss was eye-catching on debut, but a decision looms on his spot if Lobb returns, with Josh Treacy also playing an important role as a forward target. Small forward Sam Switkowski will miss after a head knock, while Liam Henry will also likely make way. Bailey Banfield demands selection after an impressive performance, so Darcy Tucker moves to medical substitute.

The Cats expect to regain skipper Joel Selwood for Saturday’s crunch game against St Kilda at Marvel Stadium. Rhys Stanley is also a chance to return after missing the trip to Canberra due to ankle injury. Luke Dahlhaus put his hand up for a recall after collecting 27 disposals and five clearances in the VFL. Zach Guthrie and Mitch Knevitt were late inclusions in the nation’s capital and might be squeezed out of the 22. Shaun Higgins didn’t face the Giants due to general soreness.

Verdict: Selwood to return and Stanley if fit, replacing Francis Evans and Jed Bews who misses with concussion. – Josh Gabelich

After being a late withdrawal against Sydney with illness, Noah Anderson will resume his place in the starting midfield against Fremantle on Sunday. Jack Lukosius is unlikely to play after aggravating a knee problem and will need to be replaced in the forward line. Josh Corbett and Joel Jeffrey can both play as a third tall forward, or Stuart Dew could opt for a smaller forward line, bringing Darcy Macpherson, Sam Flanders and Elijah Hollands into the equation.

After a heavy loss to Geelong, no fresh injuries and a bye for the VFL team, there’s some tough decisions for the Giants ahead of their match against Carlton on Sunday. Youngster Tanner Bruhn was terrific in his most recent VFL outing, as was Jake Riccardi who kicked nine goals. Josh Fahey must be closing in on a debut.

Hawthorn has ruled out Changkuoth Jiath for another week, but the club expects to regain Chad Wingard and Mitch Lewis for the clash against Richmond. Conor Nash is also in contention after missing last weekend due to a quad injury. Several Hawks banked confidence-boosting performances against a depleted Essendon on Sunday. Daniel Howe amassed 30 disposals and ten clearances for Box Hill, Liam Shiels also finished with 30 touches after being the unused sub at Marvel Stadium, Josh Morris produced a stunning shutdown role on Anthony McDonald-Tipungwuti, while Sam Butler (three goals and 15 disposals) continues to edge closer towards a debut.

Verdict: Wingard and Lewis in for Connor MacDonald and Jackson Callow. – Josh Gabelich

It should be a relatively easy week for the Demons at selection, with Max Gawn (knee) and Jake Lever (quad) deemed available to play this weekend. Mitch Brown kicked six goals from 17 disposals and 12 marks at VFL level last weekend, but he would be incredibly unlikely to find a spot in an unbeaten side. Expect coach Simon Goodwin to name an unchanged lineup.

Verdict: No changes for the Demons. – Riley Beveridge

Where do the Kangaroos go from here? Nick Larkey will return from a one-match suspension, but Ben McKay will likely go out of the side after injuring his knee in last week’s demoralising loss to the Dockers. Charlie Comben kicked two goals from 11 disposals and seven marks at VFL level last weekend, while Matt McGuinness took eight marks in an impressive performance down back. They could come into the side to add some freshness at either end. Take your pick as to who goes out of the team, though Curtis Taylor (seven disposals) and Atu Bosenavulagi (nine touches) were particularly quiet. Aaron Hall is likely still a week away from returning after a hamstring injury.

The Power will make at least two forced changes, with Riley Bonner (ankle) and Trent Dumont (health and safety protocols) unavailable. Substitute Lachie Jones shapes as a likely inclusion in the 22 after a strong SANFL performance with 24 disposals and seven tackles, with Miles Bergman also available after recovering from a virus and Kane Farrell emerging from health and safety protocols. Charlie Dixon is pushing to return, but the Power forward line is in good order and there appears no need to rush him back if there are any concerns.

Verdict: Jones and Bergman for Bonner and Dumont – Nathan Schmook

The Tigers are close to being full strength. Nick Vlastuin, Dion Prestia and Riley Collier-Dawkins look set to be declared fit after recent bouts of illness, while Hugo Ralphsmith is right to go after three weeks with a rib injury. Rhyan Mansell will miss through suspension in a straight swap for Vlastuin. Given Jayden Short’s strong form in the middle and the tight backline, it’s incredibly difficult to pick which midfielder will make way for Prestia – Marlion Pickett had 13 touches but five clearances. This week’s opponent, Hawthorn, is currently only playing one ruck, opening the door for Richmond to do the same and omitting Ivan Soldo.

Verdict: Vlastuin and Prestia for Mansell and Pickett – Sarah Black

Jack Billings has made a strong return from hamstring issues across the past fortnight in the VFL and now looks ready to play his first senior game of the season after finishing with 30 disposals against the Northern Bullants. Tom Highmore has been banging on the door for weeks and might finally be let in. Jarrod Lienert returned to VFL level and collected 31 touches. Hunter Clark got through his first game back from shoulder surgery unscathed but is set to require a bit more time, while Mitch Owens continues to star for the Zebras as he patiently awaits a second chance at AFL level. Former skipper Jarryn Geary is also mounting a case for another opportunity.

Verdict: Jack Billings to replace Dan Butler who will be given some time to deal with Achilles soreness after being substituted out of Sunday’s game. – Josh Gabelich

Following consecutive losses to Brisbane and Gold Coast there’s a bit to wade through for John Longmire ahead of Saturday’s home match against Essendon. No.1 ruckman Tom Hickey excelled in his first match back from a knee injury in the VFL at the weekend, gathering 23 touches and kicking a goal. Joel Amartey kicked four goals, Colin O’Riordan continued a fine run of matches, while James Bell and Dylan Stephens also impressed. Will Gould is right around the mark for a debut if the Swans want to re-jig their defensive unit.

The Eagles are hopeful they won’t need to draw on their WAFL top-up players this week as another group returns from health and safety protocols. Defender Alex Witherden, midfielder Greg Clark and ruck/forward Bailey Williams should all return against Melbourne, Elliot Yeo (concussion) trained early on Monday but will not be available after entering health and safety protocols. A decision on Luke Shuey (hamstring) will be made late in the week, while WAFL players Jake Florenca and sub Declan Mountford will likely make way. The Eagles have chosen not to suspend the players fined for partying after the round seven loss to Richmond, with Jackson Nelson available for selection after being in health and safety protocols.

At least three changes are expected for the Dogs in their clash with Collingwood on Friday night. Cody Weightman (collarbone), Laitham Vandermeer (hamstring) and Tim O’Brien (calf) will miss, but Marcus Bontempelli should be back after managing an ankle issue last week. Alex Keath and Tim English will be a chance to come back but need to get through full training this week. Rhylee West and Hayden Crozier could be in the mix to also come into the starting 22.

Verdict: Weightman, Vandermeer and O’Brien out for Crozier, Bontempelli and West. – Callum Twomey