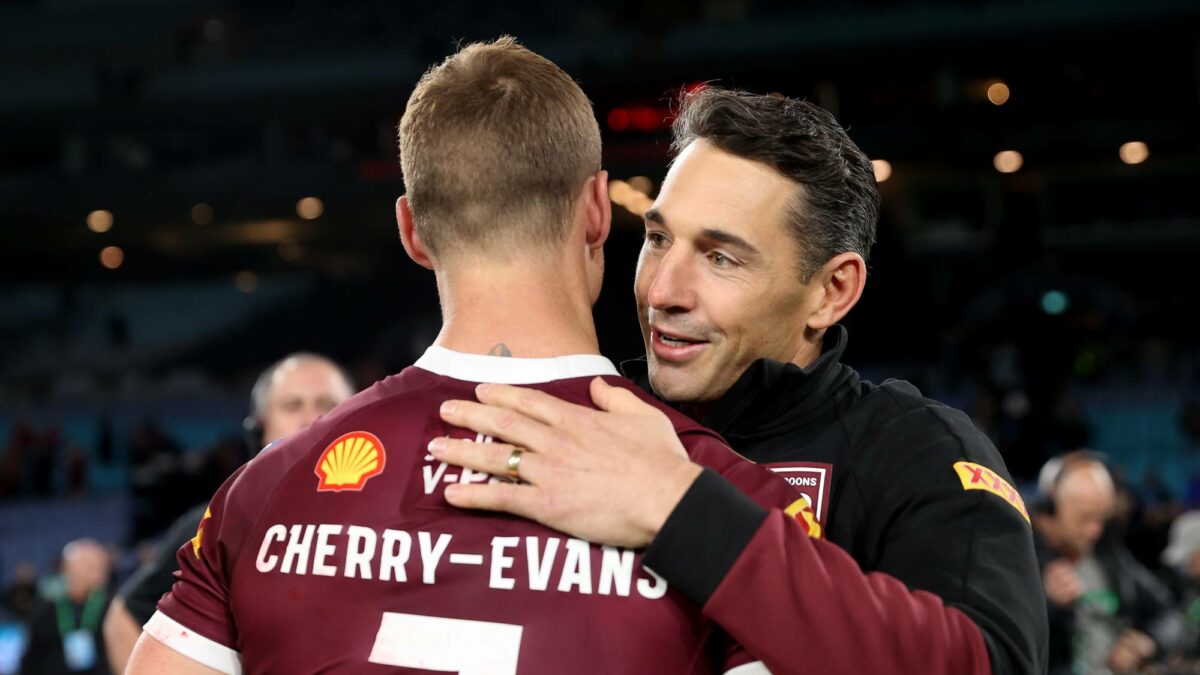 Winning a State of Origin match in your first match in a senior role is enough of a statement but it’s the way Slater has acted from the moment he got the job that suggests he will be a success in club football.

He’s been measured and strategic, calm and clear with his messaging.

Apart from a few moments in the coaches box on Wednesday night when passion got the better of him and he became animated, he was assured enough to speak to host broadcaster Channel 9 during the game.

And the players not only respect him for the player he was but for the mentor he has been to them now.

Walking among them on the Accor Stadium surface after the game, there was genuine gratitude from the likes of debutant Reuben Cotter for giving him the chance in rugby league’s toughest arena.

“He’s a passionate bugger. We’ve all seen that and we all know that so they’re a couple of good traits for any sort of coach,” his long-time Storm mentor Craig Bellamy said on Friday.

After the Maroons were humiliated 50-6 and 26-0 under Paul Green last year, there were very real fears that lopsided series could become the norm.

Queensland had jagged a 2-1 series win the previous November when Wayne Bennett returned for his own Origin swansong but everything about that series appeared an anomaly when Tom Trbojevic and co blitzed their way through the opening two matches of 2021. The 20-18 game-three consolation victory counted for little.

After nearly selecting Slater the previous year, the QRL had to give him a chance this time around when Green decided he wanted to focus on pursuing an NRL gig rather than sticking around at the Maroons.

If the Maroons had lost, particularly a heavy defeat in Origin I on Wednesday night, NSW would be one win away from a fourth series in five years.

Queensland don’t have the pool of elite NRL talent that NSW have. They can’t afford to keep chopping and changing their teams. The famous “pick and stick” mentality which has served the Sunshine State so well for more than four decades comes mainly out of necessity.

But after winning 16-10 in game one, now it’s the Maroons who have a free swing in Perth’s second match on June 26 with the luxury of knowing they’ll be back on home soil for the series finale next month.

After naming a team full of in-form players, Slater showed he wasn’t fearful of the daunting challenge in his first media conference in Origin camp when he was asked about the old chestnut of pre-match favouritism.

“As a player, I never went out onto the field in an Origin game thinking the Blues are better than me and it won’t start now,” he said, showing a steely focus for what can be a flippant topic or one that can cause distraction in the lead-up to a game.

Tactically, the Maroons were far superior to NSW.

It’s an age-old truism in Origin that the referee will be more lenient on the rough and tumble stuff so Queensland held the Blues down in the ruck just enough to annoy Brad Fittler but not the referee, they rushed up off the defensive line and applied more pressure to Nathan Cleary’s kicks that the NRL’s best player had a rare poor performance.

Slater as a player was always known for his talent – blistering speed and a brilliant ability to sniff out a gap in the defensive line.

But he also tactical nous – marshalling Melbourne, Queensland and Australia from fullback in attack and defence –  and a fair bit of mongrel about him which belied his boyish looks and relatively small stature (you may have read somewhere one or two hundred times that he was once a trackwork jockey #ICYMI).

All those who have been at the helm of club and state teams will tell you that Origin coaching is a much different beast to the year-long grind of pre-season training in November through to September and, if you’re good enough to get to the finals, that first Sunday in October (which still doesn’t sound as good as that last Sunday in September).

When Bellamy coached his first game at Melbourne in 2003 he picked Slater on the wing for a trip to Shark Park and the 19-year-old repaid him with a try in the closing stages to steal a 36-32 victory.

Bellamy, who oversaw Slater’s ensuing 318 matches in the NRL – including the 2012 and ’17 premiership wins, believes his former star fullback has all that it takes to become a successful NRL coach.

“I spoke to him before the game but there was no advice, really. He knows what he’s doing,” he told reporters at his captain’s run media conference on Friday in the countdown to Saturday night’s SCG stoush with the Sydney Roosters.

“The one thing about Bill is he was always going to be well prepared, attention to detail will be spot on and he’s a passionate bugger. We’ve all seen that and we all know that so they’re a couple of good traits for any sort of coach, especially an Origin coach.”

Bellamy had Cameron Munster, Felise Kaufusi, Xavier Coates and Harry Grant under Slater’s tutelage at the Maroons and he said the trio gave him glowing feedback.

“I spoke to our players throughout the week and they had a great week of preparations. The players have done a great job on the field and obviously the coaching staff have done a real good job as well,” he said.

“[Becoming an NRL coach] all depends on what Billy wants to do. If he wanted to do it and if he wanted to put his mind to it, there’d be no reason why he wouldn’t be able to do that.

“He’s got a fairly busy life, Bill, he’s got a few other interests, especially with horses, racehorses and breeding, so I’m not quite sure if that’s what he wants to do but if he wants to do it, I’m sure he’d make a success of it.”

Bellamy recently pledged to stick around at the Storm in 2023 before possibly making the transition to a different role with the club as the 62-year-old yet again contemplates a step toward retirement.

Slater has signed a two-year deal with the QRL so he could potentially be on the lookout for an NRL gig in 2024 so the pieces could fall into place for the prodigal son to return to Melbourne as Bellamy’s successor.

Bellamy said Kaufusi, Munster and Grant pulled up OK and “at this stage we think they’ll back up” to face the Roosters while the Storm were still waiting to find out the full damage on Coates’ ankle injury with the Queensland winger unlikely to play again in the Origin series.

Melbourne have been humming along in second spot with a 9-3 record but the Sydneysiders are uncharacteristically inconsistent in 2022, sitting seventh with a 7-6 record, going win, loss, win, loss in their past four outings.

“We want to attack the game how we think it should be played in a Roosters style,” Robinson said.

“We want to play a good brand of footy. We want to get back to some of the starts that we’ve had really well over the last month and we want to nail that.

“We know what we need to do. We don’t need to be perfect, we need to be very good at our job. We need to respect the game of rugby league and then we need to attack moments within that to dominate the play.”