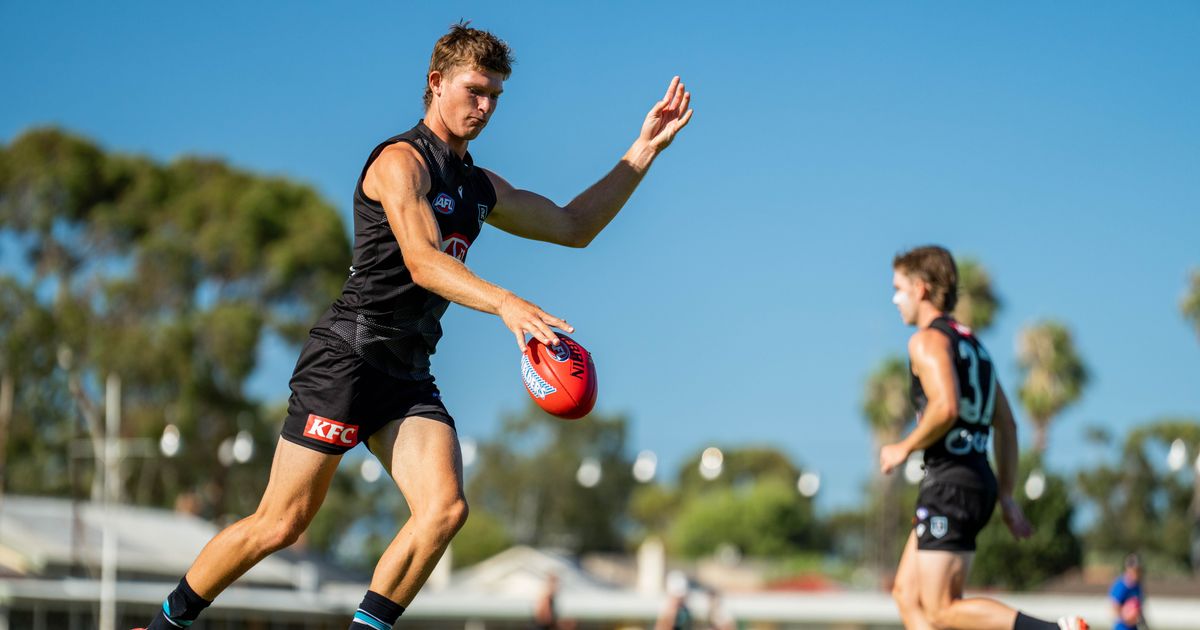 PORT Adelaide young gun Mitch Georgiades is preparing to take the next step in 2022 as part of a new-look Power attack that could start the new season without star forward Charlie Dixon.

Dixon, a 2020 Therabody AFL All-Australian, underwent surgery on his left ankle last week to repair the ligaments he damaged after landing awkwardly in a marking contest at training last month.

The club had initially hoped he would avoid going under the knife, but the 31-year-old travelled interstate to undergo the procedure and is now facing a race against the clock to be fit in time for Port Adelaide’s round one trip to Brisbane.

Georgiades kicked the second-most goals at Alberton last year, slotting 32.17 from 21 appearances to show why Port Adelaide picked him in the first round of the 2019 NAB AFL Draft, despite missing his draft year with a nasty quad injury.

“Charlie’s obviously such a big part of our team, there is no doubt about that. He’s been there for years and he is so strong at what he does,” Georgiades told reporters at a press conference on Wednesday afternoon.

“I think for us, obviously, we have to step up whether he’s playing or not. We want to kick more goals; we want to be better players; we want to keep improving every year, whether it’s myself, Jez, Toddy, all of us need to step up, whether he is back or not.”

Georgiades said Dixon had returned to the club after being forced to depart South Australia to go under the knife due to the current ban on elective surgery, and is aiming to be back in the side for the season-opener against the Lions in round one.

“It’s good to have the big fella back down at the club. It’s always a great sight to see. He’s in high spirits and chirping in a little bit, which is nice as well. He’s recovering well and hopefully pushing to get in a good spot to be eligible for round one,” he said.

“I think he’s certainly looking towards that [round one] and trying to get his body into that sort of ability to be available. It’s good to have him back around the club, hopefully he’s back as soon as possible.”

Ken Hinkley’s side look set to start 2022 without livewire small forward Orazio Fantasia who has been plagued by knee issues in recent years.

The former Bomber underwent surgery on his left knee twice last year, but is now experiencing ongoing soreness in his right and could be forced to have more surgery.

New recruit Trent Dumont underwent knee surgery this week to repair a torn meniscus and is expected to return to full training before the start of the season.

Port Adelaide acquired Finlayson from the Giants in exchange for a future third-round pick, despite the 26-year-old having two years to run on his deal in the harbour city.

Finlyason is set to be split his time as the second ruckman behind Scott Lycett and inside 50, alongside Dixon, Georgiades and Marshall, who kicked 24 goals from 21 games in 2021.

“Jezza has been awesome,” Georgiades said. “He is such a mobile forward. He competes really well in the air and then on the ground he’s really exciting. He’s been able to go into the ruck as well and be a real key role in there. Today he was flying around in the ruck and then coming forward and resting. He just provides another different option to look at.”

Georgiades didn’t report back to pre-season training until the start of the year after the club provided the West Australian with an extended break at home, due to the hard border stance in the west.

The 20-year-old trained with WAFL side Claremont prior to Christmas, along with teammate Jake Pasini, Greater Western Sydney pair Matt de Boer and Bobby Hill, as well as Sydney duo Logan McDonald and Chad Warner.

Since returning to the club in January, Georgiades has spent plenty of time going to head-to-head with Aliir Aliir and Tom Jonas at training as he looks to continue his rise in 2022.